From KeyWiki
(Redirected from Frances Beal)
Jump to: navigation, search 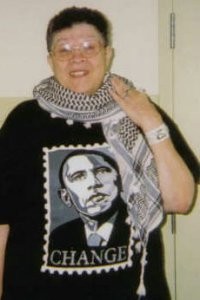 Frances M. Beal is an Oakland, California activist and writer.

Fran Beal was born in Binghamton, NY, January 13, 1940, the daughter of Ernest Yates, who was of African American and Native American ancestry, and Charlotte Berman Yates, of radical Russian Jewish immigrant roots. When Fran's father died, her mother moved the family to St. Albans, an integrated neighborhood in Queens, where her mother was active[1]in left politics.

After graduating from High School in 1958, Fran Yates became involved socialist politics at the University of Wisconsin. She married James Beal, and from 1959 to 1966, lived in France, where Frances followed the internationalist/anti-imperialist politics of African liberation struggles. During summers in the U.S. in those years, she maintained connections with the Student Nonviolent Coordinating Committee (SNCC). When her marriage ended and she returned to the United States in 1966, where she worked with the National Council of Negro Women, for a decade.

In 1968 Beal co-founded the Black Women's Liberation Committee of SNCC and wrote an important black feminist tract, "Double Jeopardy: To Be Black and Female" (Sisterhood is Powerful, ed. Robin Morgan, 1970). The Committee evolved into the Black Women's Alliance and later, to include Puerto Rican women, into the Third World Women's Alliance (TWWA). TWWA developed an analysis predicated on the interaction of race, class, and sex oppression and on an internationalist perspective...Beal joined the TWWA chapter in New York, focusing on abortion rights and sterilization abuse.

In the 1980s Beal moved to California where she served as associate editor of The Black Scholar and wrote a weekly column in the San Francisco Bay View. In recent years she has worked with the National Anti-Racist Organizing Committee (NAROC) and with the Racial Justice Project of the ACLU of Northern California.

Origins of Line of March

Leading the initial effort to found the rectification network in December 1976 were Union of Democratic Filipinos leaders Bruce Occena and Melinda Paras and Max Elbaum, then a leader of the Northern California Alliance. Soon thereafter, Third World Women’s Alliance leader (TWWA) Linda Burnham joined the group. Believing that the organizational side of party building needed to be conducted mainly in secret, the network was initially clandestine and had no formal name, its members and supporters becoming known loosely as “rectificationists.”

In 1978, rectification leaders built close ties with two members of the Guardian staff – Executive Editor Irwin Silber and former Third World Women’s Alliance leader Fran Beal who were subsequently recruited into the rectification network. At their urging, other network members joined the just-being-formed Guardian Clubs. And Silber – who had authored many of the Guardian’s ideological polemics – began to propound key elements of the rectification perspective in his Guardian columns and in debates in the Club Network.

By late 1978 differences over the Clubs’ direction and the party-building line of the Guardian led to a split, with the Guardian Club membership – supported by Silber and Beal – breaking away to form the National Network of Marxist-Leninist Clubs (NNMLC) in March 1979. This new group enabled the rectificationists to go public and publish the first comprehensive statements of the rectification line. But as Max Elbaum notes, the NNMLC’s “public attacks on the Guardian were extremely harsh, as were its broad-stroke criticisms of the OCIC. This did not auger well for the Rectificationists’ capacity to establish friendly relations with communists who held differing views.”.[2] 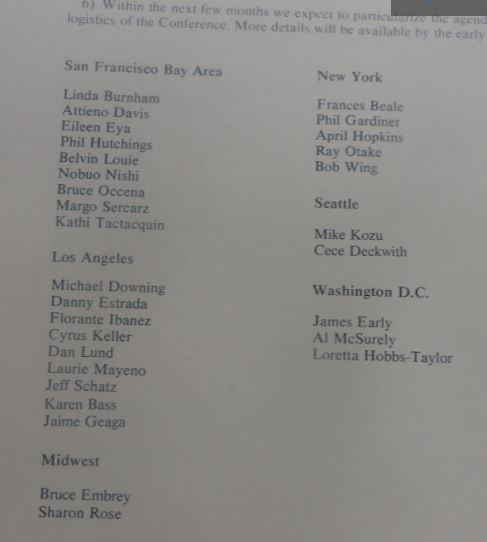 Signers from New York were;

In the late 1970s Fran Beal was active[3], in the Oakland based Maoist organization Line of March. 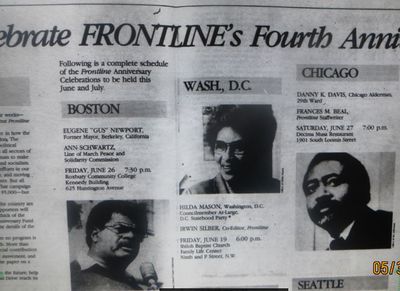 In 1988 Line of March celebrated the 4th Anniversay of their newspaper Frontline with a series of events around the country. Boston dinner speakers were Gus Newport and Ann Schwartz, Washington DC speakers were Irwin Silber and Hilda Mason. In Chicago it was Danny Davis and Fran Beal. 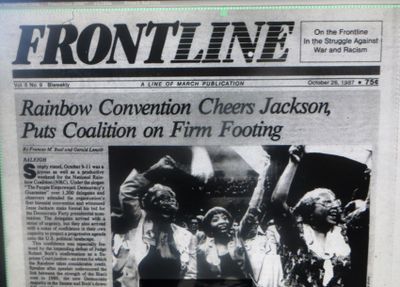 As at Nov. 13, 1989, the listed editorial staff of Line of March's Frontline included Fran Beal.

Institute for Social and Economic Studies/CrossRoads

In the mid 1990s Fran Beal served[5]on the Board of Directors of Oakland based Institute for Social and Economic Studies- sponsor of CrossRoads magazine, which sought to promote dialogue and building new alliances among progressives and leftists... and to bring diverse Marxist and socialist traditions to bear while exploring new strategies and directions for the progressive political movements.

In 1992 Fran Beal, African Americans for Peace and Justice, Oakland, endorsed the Committees of Correspondence national conference Conference on Perspectives for Democracy and Socialism in the 90s held at Berkeley California July 17-19.[6]

The Conference on Perspectives for Democracy and Socialism in the 90s was the Committees of Correspondence's first national conference held in Berkeley, California July 17-19, 1992.[7]

Workshops that were held at the conference on Saturday, July 18 included:[8]

African American What lies behind and beyond LA? What strategy for African-American liberation? What is its place in the general struggle for democracy and social advance?

The following are listed in order of votes they received as members of the Committees of Correspondence National Coordinating Committee, elected at the Conference on Perspectives for Democracy and Socialism in the 90s held at Berkeley California July 17-19.:[8]

In July 1994 Beal was elected[9]to the 15 member National Co-ordinating Committee of Committees of Correspondence at CoC's founding conference in Chicago.

In July 1996 Fran Beal was a member of the National Co-ordinating Committee of Committees of Correspondence. [10]

In 2000 Fran Beal served on the Coordinating Committee of the Black Radical Congress.[12]

On Oct 19 2000 Fran Beal lectured at the Sacramento Marxist School on The Politics of the Black Radical Congress.[13]

In 2009 Frances M. Beal was a financial supporter of the Ella Baker Center for Human Rights in Oakland, California.[16]