Flavio Casoy... MD is a psychiatrist in New York City who specializes in public mental health systems and treating individuals with serious and persistent mental illness. He works to ensure that individuals with the most serious psychiatric disorders have access to community-based services that can help them stay out of hospitals or jails and lead fulfilling lives. He has also spent over a decade pushing to make sure that everyone in the United States has access to quality and affordable health care.[1]

In 2003 Flavio Casoy was an activist from Providence, Rhode Island and a member of the Young Communist League USA[3]. 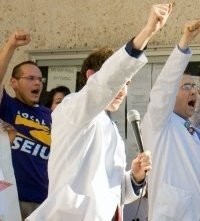 In 2009 Flavio Casoy, Medical Student Association served on the board of directors of Healthcare-Now! .[4]

Your club/group should invite guests to participate with you in a discussion of the fight for national health care reform. The podcast (audio version) and reading links provided below should be distributed well in advance of the meeting. The Political Affairs podcast features an interview with Flavio Casoy on the present struggle for national health care reform. The podcast interview is about 20 minutes long, so you can use it as the opening for the discussion in the meeting via computer.

At the time Flavio Casoy was a fourth-year medical student at Brown University in Providence, RI[6].