Fahd Ahmed came to the United States as an undocumented immigrant from Pakistan in 1991. He has been a grassroots organizer on the issues of racial profiling, immigrant justice, police accountability, and national security over the last 13 years. Fahd has been involved with Desis Rising Up and Moving in various capacities since 2000, when he had family members facing deportation, and entrapment as part of the War on Drugs. He has been the Executive Director of DRUM since 2014.[1]

This toolkit is a project of love from the grassroots, from and by Asian American communities.

As Asian Americans, we believe that our liberation is tied to Black liberation and we continue to dream about a world where all of our people will be free. The toolkit would not have been possible without the following organizations and individuals:

Thank you to the following racial justice organizers and fighters at the grassroots who have made this toolkit possible:

As you all listen to the call, we wanted to share a couple reflections. This growing movement has inspired and opened up space for new people to take action in support of Black liberation as central to our collective liberation. This is also historical. The Asian American movement and many of our grassroots organization were inspired by the Black liberation movement and do Black and Asian solidarity in our day-to-day work.

GET INVOLVED with a grassroots organization near you! We know that this is beyond just Mike Brown and Eric Warner – it is about indicting the entire system and how we do this solidarity work for the long haul. Here are some groups to consider around the country, Southeast Asian Freedom Network , CAAAV Organizing Asian Communities, Desis Rising Up and Moving!, Providence Youth Students Movement, Freedom Inc., 1Love Movement, VAYLA, Khmer Girls in Action, Mekong, and APEN.[3] 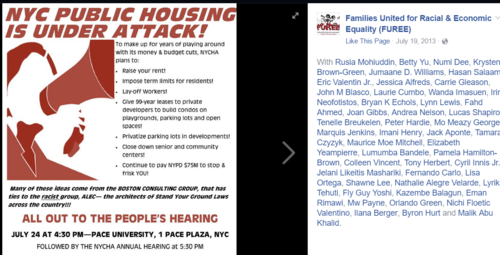 "Enemies of the State"

The Center for Media Justice and Free Press invite you to attend "Enemies of the State: Government Surveillance in Communities of Color" -- a panel discussion which explores the ways that local and federal spying operations work to stifle leaders within the movement for social and racial justice.

Today, more people are learning what many of us have already known, that U.S. agencies have carried on multiple secret domestic surveillance programs- with the aid of companies like Verizon, Facebook and Google. Unfortunately, this is nothing new. Today's NSA revelations only build on the FBI's Counter Intelligence Program (COINTELPRO), which was used during the 1960s and 1970s to monitor telephone conversations and track mail of black, Latino, and Indigenous leaders.

Though the platforms have changed, the goal remains the same: destabilize and dismantle movements for political and economic rights.

Rockwood alumni leaders standing tall in Austin, TX - at the close of a 4-day retreat to envision possibilities for US human rights advocacy and progressive national security reform. Together. We congratulate these leaders on their commitment to ongoing connection across the field, and living the Rockwood practices! — with Sharon Price, Linda Sarsour, Maya Berry, Shah Boo, Zeke Johnson, Helen S. Kim, Nus Choudhury, Fahd Ahmed and Leslie Sholl Jaffe.

Mapping Socialist Strategies was convened from August 1-4 2014 in Briarcliff Manor, NY, by the Rosa Luxemburg Stiftung—New York Office. It brang together 100 influential progressives and leftists from across the United States, Canada, and Europe for an “un-conference” on socialist strategies.

We are contacting you on behalf of the Muslim Anti-Racism Collaborative (MuslimARC)(1) and Muslims for Ferguson(2) to ask for your solidarity in the struggle and call for justice concerning the tragic and unnecessary police and federal law enforcement killings of Black men, women, and children in the United States.

From the time of our Noble Prophet ﷺ‎, anti-Black and anti-African racism has plagued Muslim societies and communities. The first martyr in the early days of Islam was Sumayyah (RA), who had black skin and was a victim of violence at the hands of the governing authorities of Makkah. Other companions with black skin, such as Ammar bin Yassir (RA) and Bilal (RA), were also victims of ridicule and torture by the same authorities. State violence against marginalized communities is not a new development. History has proven time and again that Muslims are not immune to these forms of oppression.

Indeed, these oppressive behaviors and practices go against the messages that are at the heart of our Holy Qur’an and Prophetic traditions.