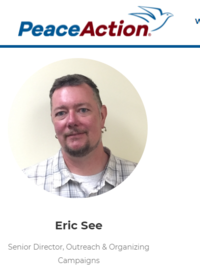 Eric See is a former member of ACT-UP and Queer Nation has been active in LGBTQ struggles since the early 90's.

He is a member of the Freedom Road Socialist Organization.[1]

In 2002 Eric See of California Peace Action and Zulma Olivares of Comité ‘98 gave talks entitled: "The Military Industrial Complex." The classes were held at the San Francisco based Center for Political Education, an organization closely associated with the Committees of Correspondence for Democracy and Socialism.[2]

In June 2010, groups from all over the country in Detroit for the U.S. Social Forum. They presented over 1000 workshops on topics as diverse as American foreign policy, the economic crisis, global warming, and trade unionism. Democratic Socialists of America presented five workshops, including "Socialism is the Alternative" — DSA members Joseph Schwartz and David Schweickart, Communist Party USA representative Libero Della Piana, Committees of Correspondence representative Carl Davidson, and Freedom Road Socialist Organization representative Eric See discussed a vision for 21st century socialism, why it is still relevant, and how we can promote unity among socialist organizations. The room for this workshop had to be expanded to accommodate the large audience.[3]

Circa 2012, Center for Political Education held a Roundtable, participatory discussion with opening comments by activists and organizers, including:

Eric See became active during the first Gulf War, he was one of the co-founders of the War Moratorium project and currently works at Peace Action West, where he is finance director.[5]

One of the Peace Action West team who campaigned for Honda was Eric See, of the Freedom Road Socialist Organization.