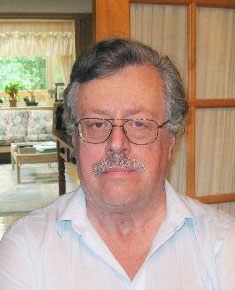 Emile Schepers is a veteran civil and immigrant rights activist. Emile Schepers was born in South Africa and has a doctorate in cultural anthropology from Northwestern University.

An anthropologist by profession, Schepers moved to the United States when his parents emigrated to escape apartheid. He grew up in the rugged and breathtaking landscape of the Adirondack mountains and joined the CPUSA in 1987, although his association with Marxist ideas began much earlier during periods of his life spent in the suburbs of Maryland and a Puerto Rican neighborhood in Chicago.

He has worked as a researcher and activist in urban, working-class communities in Chicago since 1966. He is active in the struggle for immigrant rights, in solidarity with the Cuban Revolution and a number of other issues. He now writes from Northern Virginia[1].

Schepers joined the Communist Party USA in in November 1987,and has been an acive member since.

In September 2006 the Peoples Weekly World[3]listed several members of the Communist Party USA.

Chicago Committee to Defend the Bill of Rights organized a "Celebration of the The Dynamic Life of Frank Wilkinson (1914-2006)" on Sunday October 29, 2006. Wilkinson had been a leader of the Communist Party USA, the New American Movement and Democratic Socialists of America[4].

As at December 2010, personnel of the Communist Party USA paper, Peoples World, ;[5]

In 2011, Emile Schepers is international secretary for CPUSA.[6]

"The Life & Legacy of Nelson Mandela"

Emile Schepers is the International Secretary of the Communist Party USA. A veteran civil and immigrant rights activist, Schepers was born in South Africa and has a doctorate in cultural anthropology from Northwestern University. He worked as a researcher and activist in working-class communities in Chicago for 40 years and now lives in Northern Virginia.[7]

Closed working group for the African American Equality Commission of the CP USA. This is a space for members of the commission to brainstorm, communicate, and work through ideas between official meetings.[8]

In 2015 Emile Schepers served on the editorial board of the Communist Party USA's Political Affairs. [10] 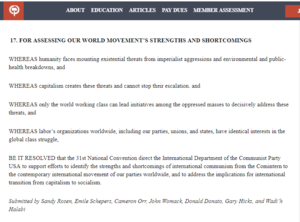 17. FOR ASSESSING OUR WORLD MOVEMENT’S STRENGTHS AND SHORTCOMINGS

WHEREAS humanity faces mounting existential threats from imperialist aggressions and environmental and public-health breakdowns, and

WHEREAS capitalism creates these threats and cannot stop their escalation. and

WHEREAS only the world working class can lead initiatives among the oppressed masses to decisively address these threats, and

WHEREAS labor’s organizations worldwide, including our parties, unions, and states, have identical interests in the global class struggle,

BE IT RESOLVED that the 31st National Convention direct the International Department of the Communist Party USA to support efforts to identify the strengths and shortcomings of international communism from the Comintern to the contemporary international movement of our parties worldwide, and to address the implications for international transition from capitalism to socialism.