Ellen Lipton is a Michigan activist.

. That fight inspired me to run for office, and in 2008 I became a State Representative. I served three terms in Lansing, the maximum allowed by state law. In Lansing, I was best known for taking on Betsy DeVos, shutting down her attempts to wreak havoc on our state’s school system with her harmful privatization agenda. I also helped spearhead energy efficiency legislation and was appointed to lead the effort to reform Michigan’s broken criminal justice system for appointing counsel to indigent citizens.

I’m proud to say I helped co-found the Progressive Women’s Caucus in the State House, which works to elect pro-choice women to the legislature. [1]

After leaving Lansing, Lipton founded and became the President of the Michigan Promise Zone Association. Promise Zones guarantee free college tuition as well as financial aid and scholarship assistance, vocational training and certification to every graduating high school student in communities across the state.

When I left the legislature, I thought my career in politics was over. I was happy to return to my law practice and continue my work as an advocate for public education. But President Trump’s election changed everything. I saw that there was much more to do, and I realized how important it is that we send more women to Washington. [3]

Sharing a stage with Van Jones 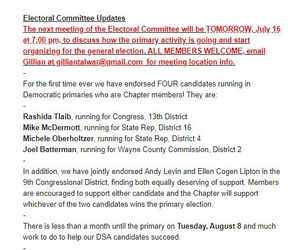 The next meeting of the Electoral Committee will be TOMORROW, July 16 at 7.00 pm, to discuss how the primary activity is going and start organizing for the general election. ALL MEMBERS WELCOME, email Gillian at gilliantalwar@gmail.com for meeting location info.

For the first time ever we have endorsed FOUR candidates running in Democratic primaries who are Chapter members! They are:

In addition, we have jointly endorsed Andy Levin and Ellen Cogen Lipton in the 9th Congressional District, finding both equally deserving of support. Members are encouraged to support either candidate and the Chapter will support whichever of the two candidates wins the primary election.

There is less than a month until the primary on Tuesday, August 8 and much work to do to help our DSA candidates succeed.