Elizabeth Gurley Flynn was a lifelong socialist. Her parents were both members of the Socialist Party USA. She was involved in the Industrial Workers of the World at an early age.

She was a member of the national board of Communist Party USA.[1]

Upon her death in 1964, Elizabeth Gurley Flynn left her estate to Dorothy Day's Catholic Worker house.[2] 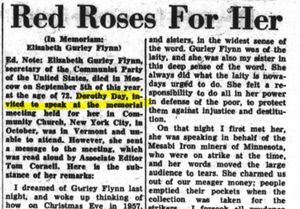 Dorothy Day was unable to personally attend Elizabeth Gurley Flynn's memorial service, where she was asked to speak in 1964. But she sent along a speech.[4] During the speech, she said in part:

"I had first met her when I was eighteen and she was lecturing at some workers' hall in Brooklyn. I was a reporter on the New York Call, which boasted a staff of socialist, anarchist/ and Wobbly reporters, in addition to trade unionists who divided their allegiance between the American Federation of Labor and the Amalgamated Clothing Workers, who had stayed outside the Federation. She was a member of the I.W.W. (Industrial Workers of the World), that truly indigenous form of unionism and radicalism. There had been no revolution in Russia as yet, and the I.W.W. was fought as bitterly as the Communists are today. In fact, it seems to me that anything that threatens money or property, anything that aims at a more equitable distribution of this world’s goods, has always been called communism. I like the word myself; it makes me think of the communism of the early Christians and the communism of the religious orders.

"In fact, the success and prosperity of religious orders shows how beneficial communism could be if it were practised for all, rather than for only those professed religious who give up family, marriage and personal belongings to devote themselves to the problems of poverty."

Dorothy Day "shared public platforms with high profile Communists including Elizabeth Gurley Flynn, a paid official of the Communist Party USA (and later its first woman Chairman), took an active part in an array of Communist-led strikes during the 1930s and ‘40s and used her newspaper, the Catholic Worker (CW), of which she was editor for almost 50 years, as an organ of propaganda in favor of Communism.[5]

Transition from the IWW to the Communist Party

Elizabeth Gurley Flynn discussed her youthful impatience for socialism as the reason she joined the Industrial Workers of the World during a speech to students and faculty members of Northern Illinois University, in DeKalb, on November 8, 1962. "Her talk was sponsored by the History Club of the University and its chapter of the Student Peace Union. The occasion was chaired by Kenneth Owens, an assistant professor of history at the University."

"And so today the methods to have political auxiliaries to unions is a much better and a much more effective thing. But we tried to put everything in one pot and it simply didn't work. We were unable, and we were pretty arrogant. We were young and had the right answer to everything. We didn't want to work with the American Federation of Labor, we didn't want to work with the Socialist Party USA, we didn't want to work with anybody else. And naturally, when the Communist Party USA came along, they considered that a real party because here was a much more revolutionary organization than the old Socialist Party USA, and they didn't agree either with the concept of the Russian Revolution although they were glad that it was a revolution that overthrew the Czar and they didn't stand with Kerensky but there was certain, you might almost call it, primitive concepts of a revolution. To the Industrial Workers of the World, a revolution meant that you take over the factories, and the shops and the mills, and the mines and the fields and you chase the bosses out, just chase them out, and that was the end of it. That was the revolution.

"However, they ignored the state. Their idea was that the state would disappear, when you abolish capitalism, you abolish the state, but that the state might continue to exist, that it might be necessary for it to continue to exist, was not exactly within the Industrial Workers of the World picture so naturally they expected a great deal more from a revolution in another country than it was possible for that country to achieve overnight.

"By 1922, the Communists in America had received their orders from the Communist International to exploit Negroes in the Communist program against the peace and security of the United States. In 1923, the NAACP began to receive grants from the Garland Fund which was a major source for the financing of Communist Party enterprises. (Officials of the Fund included Communists William Z. Foster, Benjamin Gitlow, Elizabeth Gurley Flynn, Scott Nearing, and Robert W. Dunn, along with prominent leftwingers Roger Baldwin, Sidney Hillman, Ernest Gruening, Morris Ernst, Mary E. McDowell, Harry F. Ward, Judah L. Magnes, Freda Kirchwey, Emanuel Celler, Paul H. Douglas, Moorfield Storey, and Oswald Garrison Vilard). The grants continued until, at least, 1934."[7]