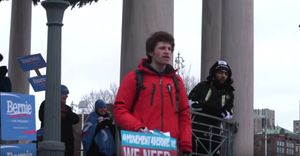 Elan Axelbank is "a leader of the Boston branch of Socialist Students," an "initiative launched by student members of Socialist Alternative,"[1] which "helped kick off massive marches in New York City, Seattle, Philadelphia, Oakland, California, and Ann Arbor, Michigan."[2]. He is also a student at Northeastern University.

Elan Axelbank is "organizing a walk-out on January 20, 2017 to protest the inauguration of President-elect Donald Trump."[3]

“Donald Trump got elected last night and he’s putting forward a right-wing, racist agenda, and we need to stand firmly against that," Axelbank told The Daily Free Press before the rally began. “The most effective way to do that is building powerful movements."[4]

Elan Axelbank was given national press as an "organizer" of the Million Student March in November 2015 by such outlets as Reuters, Teen Vogue and the Washington Post. None of those publications mentioned that Axelbank is a Marxist organizer.[5],[6],[7]

Elan Axelbank spoke at a rally for Bernie Sanders during the 2016 presidential campaign.

"It’s becoming clearer and clearer that the Democratic National Committee, the establishment of the Democratic Party, has been organizing movements against us, against our political revolution," Axelbank said. "So what does that mean? That means that we have to have an organized movement against them. We’re going to keep fighting for Bernie Sanders’ radical platform across the country and against the rule of the billionaire class, and we’re going to fight for new political party of, by and for the 99 percent."[8]