Detroit DSA also did statewide mailings and e-mail blasts to our members urging them to vote for lesser known candidates on the ballot: Diane Hathaway for Michigan Supreme Court, Diann Woodard for the Michigan State University Board of Trustees, and Paul Massaron (whose wife is a DSA member) for Wayne State University Board of Governors. All three of these candidates won..

In 2009, Diann Woodard was a member of the Host Committee for the Essential: Advocacy for Community Justice Reception & Silent Auction which was held at the Atlas Global Bistro, Detroit. The reception, which was held on Nov. 18, 2009 is the annual fundraising event to benefit the far left National Lawyers Guild-affiliated Maurice & Jane Sugar Law Center for Economic & Social Justice. Remarks were made by Steve Tobocman and the Maurice Sugar Voice for Justice Award was presented to Marilyn Mullane, Executive Director, Michigan Legal Services.[2] 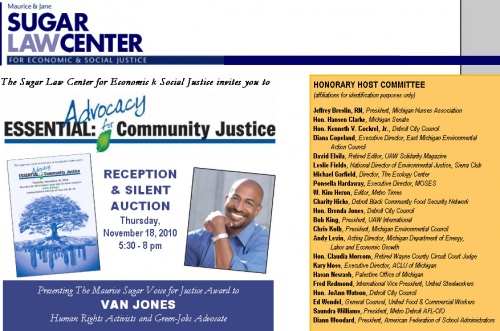 Members of the Honorary Host Committee were;[3]