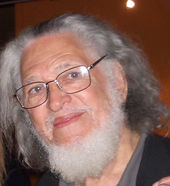 Template:TOCnestleft Dennis Vincent Brutus (1924-2009) South African political organizer and poet. He died early on December 26 2009 in Cape Town. He was born in Salisbury, Rhodesia in 1924, but his South African parents soon moved to Port Elizabeth, where he attended Paterson and Schauderville high schools.[1].

Brutus entered Fort Hare University on a full scholarship in 1940, graduating with a distinction in English and a second major in psychology. Further studies in law at the University of the Witwatersrand were cut short by imprisonment for anti-apartheid activism[2].

Brutus’ political activity initially included extensive journalistic reporting, organising with the Teachers’ League and the African National Congress movement, and leading the new South African Sports Association as an alternative to white sports bodies. After his banning in 1961 under the Suppression of Communism Act, he fled to Mozambique but was captured and deported to Johannesburg. There, in 1963, Brutus was shot in the back while attempting to escape police custody. Memorably, it was in front of Anglo American Corporation headquarters that he nearly died while awaiting an ambulance reserved for blacks.

While recovering, he was held in the Johannesburg Fort Prison cell which more than a half-century earlier housed Mahatma Gandhi. Brutus was transferred to Robben Island where he was jailed in the cell next to Nelson Mandela, and in 1964-65 wrote the collections Sirens Knuckles Boots and Letters to Martha," two of the richest poetic expressions of political incarceration"[3].

Subsequently forced into exile, Brutus resumed simultaneous careers as a poet and anti-apartheid campaigner in London, and while working for the International Defense and Aid Fund, was instrumental in achieving the apartheid regime’s expulsion from the 1968 Mexican Olympics and then in 1970 from the Olympic movement[4].

Upon moving to the U.S. in 1971, Brutus served as a professor of literature and African studies at Northwestern (Chicago) and Pittsburgh, and defeated high-profile efforts by the Reagan administration to deport him during the early 1980s. He wrote numerous poems, 90 of which will be published posthumously next year by Worcester State University, and he helped organise major African writers organisations with his colleagues Wole Soyinka and Chinua Achebe[5].

In 1993 Brutus was listed as a among "former Visiting Fellows and Visiting Scholars and current TransNational Institute Fellows" on the Institute for Policy Studies 30th Anniversary brochure.

Ad Hoc Committee to Keep South Africa out of the Olympics

In December 1983, a creation of the Federation for Progress, the Ad Hoc Committee to Keep South Africa out of the Olympics wrote a letter:

We have reason to believe that there will be an attempt by the expelled South African Olympic Committee to regain membership in the International Olympic Committee. Some indication of this has appeared in the Economist (September 3, 1983) which states, "The South Africans are going to plead in some foreign high courts that their exclusion from international athletics is contrary to signed international athletic agreements...If they get their declaration, they intend to ask the California courts to enforce it...."

J) issue a clear. public declaration that they will oppose any efforts by the racist regime of South Africa to regain membership in the International Olympic Committee; 2) support the Commonwealth Games Federation resolution; 3) issue a public declaration opposing the establishment of a South African information center in Los Angeles to promote propaganda legitimizing apartheid in sport.

In 1987 Dennis Brutus was on the Board of Directors of the Black Press Institute[8].

Chicago Committee to Defend the Bill of Rights Bicentennial Celebration

On November 10, 1991 Dennis Brutus was listed as a member of the 1991 Tribute Committee for the Chicago Committee to Defend the Bill of Rights Bicentennial Celebration.[9]

Back to South Africa

Following the political transition in South Africa, Brutus resumed activities with grassroots social movements in his home country. In the late 1990s he also became a pivotal figure in the global justice movement and a featured speaker each year at the World Social Forum, as well as at protests against the World Trade Organisation, G8, Bretton Woods Institutions and the New Partnership for Africa’s Development.

Brutus continued to serve in the anti-racism, reparations and economic justice movements as a leading strategist until his death, calling in August 2009 for the "Seattling" of the recent Copenhagen summit because sufficient greenhouse gas emissions cuts and North-South "climate debt" payments were not on the agenda.

His final academic appointment was as Honorary Professor at the University of KwaZulu-Natal Centre for Civil Society, and for that university’s press and Haymarket Press, he published the autobiographical Poetry and Protest in 2006.

Among numerous recent accolades were the U.S. War Resisters League peace award in September 2009, two Doctor of Literature degrees conferred at Rhodes and Nelson Mandela Metropolitan University in April 2009 -- following six other honorary doctorates – and the Lifetime Achievement Award of the South African government Department of Arts and Culture in 2008.

Brutus was also awarded membership in the South African Sports Hall of Fame in 2007, but rejected it on grounds that the institution had not confronted the country’s racist history. He also won the Paul Robeson and Langston Hughes awards.

Even in his last days, Brutus was fully engaged, advocating social protest against those responsible for climate change, and promoting reparations to black South Africans from corporations that benefited from apartheid. He was a leading plaintiff in the Alien Tort Claims Act case against major firms that is now making progress in the U.S. court system[10].

On the occasion of Brutus' death, Gerald LeMelle, Executive Director of Africa Action commented in a tribute on the Africa Action website,

“Not only was Dennis a long-time friend, personal mentor and partner to this organization, but he made invaluable contributions to the anti-apartheid struggle around the world. This is a very sad time for Africa Action."

In 2006 Dennis Brutus contributed a foreword to Marx, Lenin, and the Revolutionary Experience: Studies of Communism and Radicalism in an Age of Globalization by Trotskyist writer Paul Le Blanc.

Below are two poems presented by Dennis Brutus, in Venezuela for the eighth meeting of the Network of Intellectuals and Artists in Defence of Humanity and the World Forum for Alternatives, October 18, 2008. Dennis Brutus

Poem immediately following the conference, in the Hotel Alba overlooking Caracas mountains, 5:50am on October 18, 2008.

Poem delivered at the closing session.

In thanks to President Hugo Chavez and the people of Venezuela, Dennis Brutus October 18, 2008, Caracas[12].

In 2009 Dennis Brutus served on the Advisory Committee of the U.S. based Independent Progressive Politics Network[13].

Brutus made the following comment in his open letter to the UN Climate Change Gathering in Copenhagen on Oct. 12, 2009,

"The danger in falling short of setting deep cuts of 45% from 1990 carbon emission levels is that it puts us beyond the tipping point where unknown additional and more catastrophic changes will be wrought in the earth's water and rainfall systems, ultimately killing millions in sudden and violent storms, droughts and fires."[14]

He intended to attend the conference as he states in the video to the right, filmed on the occasion of his 85th birthday, however he died shortly afterwards.