Dean Baker (b.July 13, 1958) is described as an American macroeconomist.

He graduated with a B.A. from Swarthmore College in 1981, then with an M.A. from the University of Michigan in 1983.

Dean Baker received his Ph.D in economics from the University of Michigan.[1]

He had also worked as an assistant professor at Bucknell University.[2]

It is claimed that his areas of expertise are: Housing, consumer prices, intellectual property, Social Security, Medicare, trade, employment.[3]

Other areas of Baker's expertise include budget and taxes and inflation and interest rates.[4]

Baker, when a grad student at the University of Michigan, was a participant at two sit-ins for which he was arrested, in protest at Rep. Carl Pursell's votes for military aid to the Contras.[5] [6]

The Contras were an American backed - (under the Reagen administration) - anti-communist insurgency who were fighting the then Soviet and Cuban aligned Sandinista regime in Nicaragua.

Baker is co-director of the Centre for Economic and Policy Research in Washington D.C.

He was also its co-founder.

He had also previously worked as a senior economist for the above.[7]

Baker has a blog called Beat The Press which features commentry on economic reporting.[9]

Beat The Press was formerly published at The American Prospect, but has been relocated at the CEPR website.

He also contributes a weekly column for the Guardian Unlimited (UK).[10]

He was the author of the weekly online commentary on economic reporting, the Economic Reporting Review (ERR), from 1996 - 2006.[11]

Baker's analyses have appeared in many major publications. These include the New York Daily News, the Washinton Post, the London Financial Times and the Atlantic Monthly.[12]

Baker's books include: False Profits: Recovering form the Bubble Economy (PoliPoint Press, 2010); Plunder and Blunder: The Rise and Fall of the Bubble Economy (PoliPoint Press), wherein he points the finger at greed as part of the problem; The Conservative Nanny State: How the Wealthy Use the Government to Stay Rich and Get Richer; Thinking Big: Progressive Ideas for a New Era (Progressive Ideas Network, 2009)and Social Security: The Phony Crisis (with Mark Weisbrot, University of Chicago Press, 1999).[13]

These include "Are Protective Labor Market Institutions at the Root of Unemployment? A Critical Review of the Evidence," (with David R. Howell, Andrew Glyn, and John Schmitt); Capitalism and Society 2, no. 1, 2007; "Asset Returns and Economic Growth," (with Brad DeLong and Paul Krugman) and The Benefits of Full Employment (with Jared Bernstein).[14]

Congressman John Conyers Jr. (D-Mich.) hosted a National Health Insurance Conference, April 16-17, 2004 to kick off a 50-state campaign for passage of national health insurance legislation, HR 676 – the “Expanded and Improved Medicare for All Act.” Conyers introduced HR 676 in the House in 2003.

Dr. Quentin Young, national coordinator of Physicians for a National Health Program, keynoted the conference, speaking on “The State of Health Care – The Case for National Health Insurance.” Conyers spoke on “Launching a National Movement for HR 676,” followed by a session on “Getting the Message Out – Working the Media.”

Dean Baker, of the Center for Economic and Policy Research, and Joel Segal, senior assistant to Conyers, presented the details of HR 676 in a session titled, “What Is It and How Do We Pay For It?” They will seek to arm the participants to take the message back to the neighborhoods. There was also a session on strategies to promote single-payer legislation on the state level. Activists were working on state single-payer bills in a number of states, including Massachusetts, California, and Pennsylvania. The agenda includes nuts-and-bolts workshops on working with unions, faith communities, educators, and health workers.

Dozens of health care and social justice organizations endorsed the conference including Physicians for a National Health Program, the Gray Panthers, Jobs with Justice of Washington, D.C., the National Coalition for the Homeless, the American Medical Students Association, Universal Health Care Action Network, and the National Welfare Rights Union.

“We believe that the leadership should come from the people that do the work, and now is the time to build a serious movement for national health insurance for all in America,” asserted conference organizers Michelle Tingling-Clemmons and Rick Tingling-Clemmons. The conference was held at Howard University Hospital and Towers Auditorium, 2041 Georgia Ave. NW, Washington, D. C.[15]

As of 2009 Dean Baker was a Contributing Editor of Chicago based socialist journal In These Times.[16]

Some of the more powerful and influential bodies he has been consultant for include the OECD's Trade Union Advisory Council; the World Bank and the Joint Economic Committee of the U.S. Congress.[17]

Dean Baker of The American Prospect was an identified member of JournoList - an email group of approximately 400 "progressive" and socialist journalists, academics and "new media" activists.

JournoList members reportedly coordinated their messages in favor of Barack Obama and the Democrats, and against Sarah Palin and the Republican Party. JournoList was founded in 2007 and was closed down in early 2010.[18]

Following the establishment of the Congressional Full Employment Caucus February 2014, Congressman John Conyers (D-Mich.) and Congresswoman Frederica Wilson (D-Fla.) are hosting a forum entitled, "Employment: A Human Right," moderated by Christina Bellantoni, Editor-in-Chief of Roll Call, this Wednesday, February 5th from 2 -- 3pm in 2226 Rayburn House Office Building. Esteemed panelists for this forum included: Dean Baker the Co-Director and Co-founder of the Center for Economic and Policy Research; John Cavanagh, Director of the Institute for Policy Studies; Phil Harvey, Professor of Law and Economics at Rutgers University; Thea Lee, Deputy Chief of Staff of the AFL-CIO; and Lawrence Mishel, President of the Economic Policy Insitute.[20] 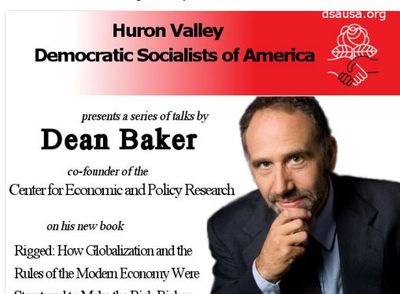