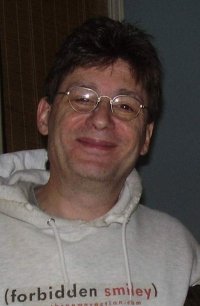 David Belkin is an economist who has authored or contributed research to numerous studies of New York City tax and welfare policies. Mr. Belkin worked for six years as a policy and budget analyst in the office of the Manhattan Borough President. He has published several articles and co-edited a book on comparative economic systems. Before turning to economics, he was a social worker[1].

Belkin received his Master's Degree in social work from Hunter College School of Social Work and his B.A. from Adelphi University[2].

The Center for Democratic Values, a progressive think-tank developed with DSA sponsorship, made its first public appearance at the Socialist Scholars Conference in New York, April 12 - 14. 1996 . CDV cosponsored two panels at the conference and held a reception to introduce the Center to the assembled socialist scholars and activists.

The first panel dealt with rethinking the role of government. The discussion centered around a paper authored by DSA member and CDV organizer David Belkin which challenged the left to seriously reopen the issue of the role of government in a democratic society. Carol O'Cleireacain, former New York City Budget Director, another member of the panel, stressed the need for the left to pay more attention to organization and management as well as policy and structure, the traditional focuses of socialist theories. Joseph Schwartz, a DSA member and professor at Temple University, also spoke.

As chair of Philadelphia DSA, Kathy Quinn participated in the second CDV sponsored panel, which was titled "The Next Left". The panel was chaired by DSA National Director Alan Charney. It featured David Sprintzen, head of the Long Island Progressive Coalition, and Quinn focusing on local organizing, and philosophy professors Steven Eric Bronner and Ron Aronson talking in broader and more theoretical terms about the prospects for progressive organizing[7].

Mr. Belkin joined the Independent Budget Office in July 1996 and is a senior economist who has authored or contributed research to numerous studies of New York City tax and welfare policies. He is responsible for IBO's sales and business income tax revenue forecast. Before joining IBO, Mr. Belkin worked for six years as a policy and budget analyst in the office of the Manhattan Borough President[8].

The Independent Budget Office (IBO) is a publicly funded agency that provides nonpartisan information about New York City's budget to the public and their elected officials.

IBO presents its budgetary reviews, economic forecasts, and policy analyses in the form of reports, testimony, memos, letters, and presentations. IBO also produces guides to understanding the budget and provides online access to key revenue and spending data from past years.