Dellinger was arrested in one while protesting the Vietnam War during the 1968 Democratic National Convention in Chicago.[2]

The Various Mobilization Committees to End the War in Vietnam

Dave Dellinger was involved in literally all of the major so-called "peace" mobilization committees protesting the Vietnam war which arose out of the original 1966 "Call to Vietnam Week" which became the "Call for a National Student Strike" first proposed by the Communist Party USA's youth front, the W. E. B. DuBois Clubs of America (DuBois Clubs) (DCA), led by Bettina Aptheker, an avowed communist and daughter of CPUSA theoretician Herbert Aptheker.

This "call" led to the formation of an "united front" that was formed at the University of Chicago conference held from December 28-30, 1966. Its' name eventually became the "Spring Mobilization Committee to End the War in Vietnam" (Spring Mobe), and was dominated by various types of communists, Marxists, socialists and leftists. The dominant communist/Marxist organizations included the CPUSA and its youth arm the W.E.B. DuBois Clubs of America (DCA), the Trotskyite "Socialist Workers Party" (SWP) and its youth arm the Young Socialist Alliance (YSA), the splinter Trotskyite "Workers World Party (WWP) and its youth arm, "Youth Against War and Fascism (YAWF), the Maoist Progressive Labor Party (PLP), and the Marxist weekly newspaper the "National Guardian (NG) which later changed its name to just the "Guardian".

David Dellinger was elected as a Vice Chairman of the Spring Mobilization Committee (Spring Mobe) at this organizational meeting, and he was described in a House Committee on Un-American Activities (HCUA) report as follows (Page 34): "Vice Chairman - David Dellinger, editor of Liberation, which describes itself as a "monthly of revolutionary nonviolence." (A.J. Muste was also an editor of this publication." Dellinger is a self-proclaimed pacifist, a defender of Castro's regime in Cuba, a supporter of the Fair Play For Cuba Committee (FPFCC) and similar groups. Last fall he made a world tour which included visits to Moscow, Peking and Hanoi. He visited the last two named Communist capitals despite the fact that the State Department had not validated his passport for travel to Red China or North Vietnam".[3].

The People's Peace Treaty (PPT) was a fraudulent document of "peace" between the leftist-led National Student Association (NSA) of the US and several North Vietnamese communist "student" fronts, as well as with the [[National Liberation Front/SV], the political wing of Hanoi's Lao Dong Party in South Vietnam and the Lao Dong Party of North Vietnamese itself.

The organization behind this "peace treaty" placed a nearly full page ad in the New York Times (NYT) of March 7, 1971, Sunday edition, Page 7, starting with a quote by President Dwight D. Eisenhower, August, 1959 which said "People want peace so much that one of these days governments had better get out of their way and let them have it." [The quote was referring to the Captive Nations of the Soviet Bloc, North Korea and Red China (which had just invaded Tibet and conquerred it).

National Committee for a Citizens' Commission of Inquiry on U.S. War Crimes in Vietnam

A mélange of hardcore communists/Marxists and New Lefters, including a few Vietnam veterans, formed a organization to "investigate" U.S. war crimes In So. Vietnam. It was officially entitled "National Committee for a Citizens' Commission of Inquiry on U.S. War Crimes in Vietnam", commonly known as the Citizens' Commission of Inquiry (CCI), and formed in late 1970 with the help of old-line pro-Hanoi communists/Marxists and radical Vietnam veterans.

David Dellinger was listed as a "Sponsor" of the CCI and his named appeared on their letterhead in at least printed exhibits of their letters including "The Meaning of the Bicentennial: Volume One: The Peoples Bicentennial Commission" (PBC), Max Friedman, ACU Education and Research Institute American Conservative Union (ACU), 1976, Exhibit 8, page 38 (with a related article on their "war crimes" exhibit on page 39, Exhibit 9, "Darling of Radic-Libs Opens "War Crimes" Show", Human Events weekly, Feb. 6, 1971, p. 3, and two in "The Attempt to Steal the Bicentennial: The Peoples Bicentennial Commission", hearings, Senate Internal Security Subcommittee (SISS), Senate Judiciary Committee (SJC), 94th Congress, 2nd Session, March 17 and 18, 1976, p. 112 (Exhibit 18) and p. 119 (Exhibit 19).

There is a Keywiki page for the CCI which lists all its leaders, Sponsors, and their National Coordinating Committee including Jane Fonda and Jeremy Rifkin. A Senate Internal Security Subcommittee, Senate Judiciary Committee hearing on the founding conference of New Mobe can be found in the "Extent of Subversion in Campus Disorders: Testimony of Max Phillip Friedman", Part 2, Aug. 12, 1969 (Executive Session, released Oct. 15, 1969), 91st Congress, 1st Session.

In all these publications, many more details on the "Mobe" and PCPJ activities of David Dellinger can be found, along with those key Mobe leaders whose true identities as various types of communists/Marxists were not presented or known in the earlier hearings, as well as their direct ties to North Vietnam in support of Hanoi's efforts to conquer South Vietnam (and Laos, with their troops in Cambodia in support of the murderous Khmer Rouge). 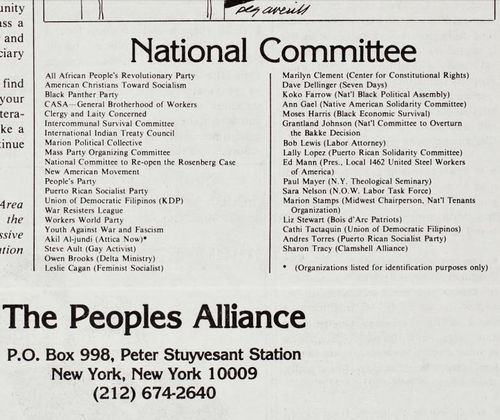 Those Serving on the National Committee of the Peoples Alliance in 1978 included Dave Dellinger, Seven Days.

In March 1979, the New York radical magazine the Guardian issued an emergency appeal to funds in an effort to save the publication.

Over fifty supporters endorsed the appeal including Dave Dellinger[4]

At the 1987 National Rainbow convention in Raleigh North Carolina, a new board was elected, which included Dave Dellinger.