Daniel Millstone is the father of David Millstone and Noah Millstone. He is a New York City activist, a Democratic Socialists of America member and the partner of Judith Rubenstein.[1]

In 2014, Daniel Millstone was listed a a friend on the DuBois Clubs Facebook page.[2]

As human beings, we are shocked and appalled at the mass destruction unleashed by the State of Israel against the people of Gaza in its military operation, following years of Israeli occupation, siege, and deprivation.
As progressives, we reject the same justifications for the carnage that we heard ad nauseam from the supporters of the Second Iraq War: the so-called "war on terror," the "clash of civilizations," the "need to re-establish deterrence" – all of which served to justify a misguided and unnecessary war, with disastrous consequences for America and Iraq. 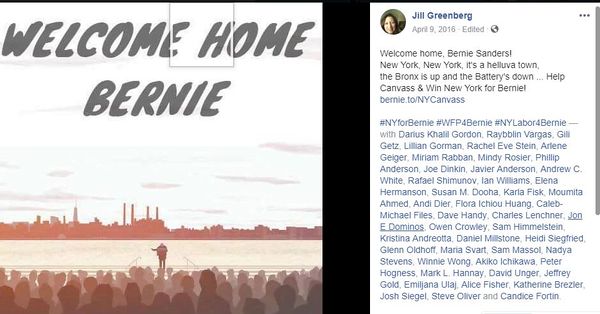 Welcome home, Bernie Sanders! New York, New York, it's a helluva town, the Bronx is up and the Battery's down ... Help Canvass & Win New York for Bernie! bernie.to/NYCanvass