Crossroads Fund, founded in 1981 supports community organizations working on "issues of social and economic justice" in the Chicago area.

Crossroads Fund was imagined in 1979, when a group of young people came together with an idea;[1]

-- they envisioned a foundation where community members would have control of the money and of grantmaking decisions, where the people who were most affected by and experienced at confronting racial, economic, and social injustice would make decisions about where to put resources to have the most significant impact for social change. They dreamed of a partnership of activists and donors -- of accountability to community -- so that people from all walks of life would be invested in progressive community change. This idea became the Crossroads Fund.

In 1981, Crossroads Fund gave out our first grant to a group that continues to serve as a "crucial resource today for 7,500 clients a year, including low-income women, lesbians, and young women" -- the Chicago Womens Health Center. That grant was for $4,130, and it helped to seed the growth of that organization, and the practice of Crossroads Fund as "a critical resource for groups working for social change in the Chicago area".

Since our founding, we have continued our commitment to have community members make the decisions about where money is distributed. Our Board of Directors and grantmaking committee reflect the diversity of the issues that we fund. Since 1981, we have distributed more than $4 million to hundreds of groups, working across the spectrum of social justice issues. 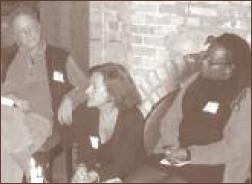 In fall of 2005, Crossroads Fund worked closely with donors and board members to put together house parties featuring discussion on critical community issues, and also raise money for Crossroads Fund.

Bill Ayers and Bernardine Dohrn, along with Yvonne Welbon and Dorian Warren hosted a group of donors and friends as they "engaged in a lively discussion about political participation in Chicago".[5]

Crossroads Fund is working to understand how to support participation in the electoral process on an on-going basis, making government more accessible and accountable to voters and tax-payers.