The Abraham Lincoln School for Social Sciences was a Chicago institution of the 1930s and 1940s, run by the Communist Party USA. 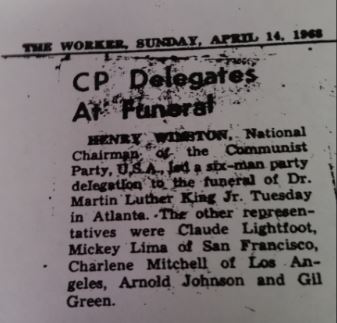 In Chicago on October 27, 1971 - The Presidential Ballroom of the Midland Hotel was packed with more than 400 people last Friday to mark the 8Oth birthday of Wiliam L.Patterson, the man who rocked the world with his charge of genocide against the U.S. imperialists. Spokesmen for the committee sponsoring the banquet told the Daily World that many who had delayed in getting reservations had to be turned away. Veterans of the working class movement said they could not remember an occasion bringing together such a broad spectrum of workers, trade unionists and professionals, in a tribute to a Communist leader.[2]

1979 Tribute to Claude Lightfoot in Chicago

On Sunday, February 11, 1979, the Communist Party USA (CPUSA) and its supporters held "a salute" and "tribute" regarding "the history of Black people and pay tribute to one of those who has shaped that history, Claude Lightfoot, veteran Black leader of the working class and the Communist Party," according to the Feb. 15, 1979 article "800 crowd Chicago hotel to Honor Claude Lightfoot", Daily World (DW), Page 4, by Ted Pearson.

The people attending this affair were described variously as "from all walks of life", "many of them life-long friends and associates of Lightfoot", and "the crowd represented Black, white and Latino peoples, young and old." Also, the "sons, daughters and even grandchildren" of those who worked with with Lightfoot and "other Communists during the Depression and World War II" were there.

Excerpts from this article revealed the following:

Sitting on the speakers' platform were such notables as:

The main speaker was:

"Highlighting the event was Peter Seeger and the Rev. Frederick Douglass Kirkpatrick, who gave a concert of the music of the freedom struggle."

The concert itself was sponsored by a committee co-chaired by:

Telegrams to the audience and to Dr. Lightfoot were received from:

"A literature table at the back of the hall did a brisk sale of Lightfoot's two most recent books, "Racism and Human Survival," and "Human Rights, U.S. Style."

Quote from Lightfoot: "I have been free since the day I joined the Communist Party. I have never had to compromise the man. Material things have not been forthcoming, but I was free - free at last."