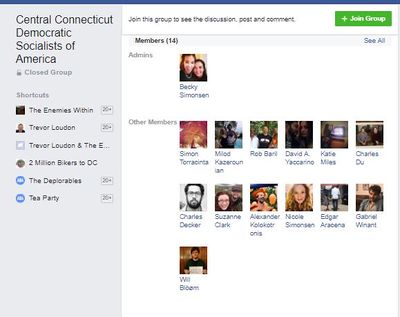 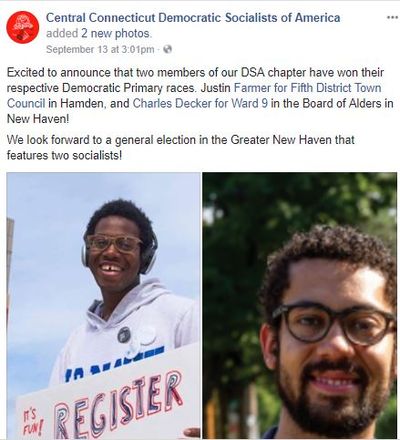 Excited to announce that two members of our DSA chapter have won their respective Democratic Primary races. Justin Farmer for Fifth District Town Council in Hamden, and Charles Decker for Ward 9 in the Board of Alders in New Haven! We look forward to a general election in the Greater New Haven that features two socialists!

As of December 2019 Central Connecticut Democratic Socialists of America had five members win public office. Darnell Ford, a child services worker and executive board member of SEIU 1199 New England, won a seat on the Middletown Common Council. Kellin Atherton won a seat on the Middletown Planning and Zoning Commission. They join three incumbent DSA electeds who were re-elected to city council seats: Charles Decker in New Haven, Justin Farmer in Hamden, and Gina Morgenstein in Wallingford.[2]

The Democratic Socialists of America (DSA) today (11/9/17) announced that its membership now includes 15 new elected officials. This is in addition to 20 elected already in offices around the United States. On Tuesday the DSA was represented in 25 elections across 13 different states. Four of those running have national endorsements from the DSA, and many others were supported by our local chapters.

Charles Decker (D) Alderman for District 9, New Haven CT , was on the list.[4]