From KeyWiki
(Redirected from CLUW)
Jump to: navigation, search

Coalition of Labor Union Women is the "only national organization for union women" and was formed in 1974 as a nonpartisan organization.

The primary mission of CLUW is to unify all union women in a viable organization to determine our common problems and concerns and to develop action programs within the framework of our unions to deal effectively with our objectives.

At its founding convention in Chicago, Illinois, CLUW adopted four basic goals of action: to promote affirmative action in the workplace; to strengthen the role of women in unions; to organize the unorganized women; and to increase the involvement of women in the political and legislative process

The CLUW is considered one of the AFL-CIO's constituency groups, along with the Asian Pacific American Labor Alliance, Coalition of Black Trade Unionists, A. Philip Randolph Institute, Labor Council for Latin American Advancement and Pride At Work.

Joyce Miller was the President of the Coalition of Labor Union Women and Ellen Gurzinsky was once its executive director.

Gloria Steinem was one of the cofounders the Coalition of Labor Union Women in 1974.[1] 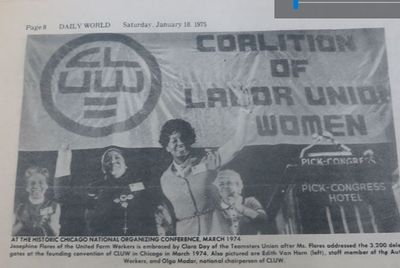 In the early 1970s, Communist Party USA aligned union members began to find their voice through new coalitions such as the Coalition of Black Trade Unionists , the Labor Council for Latin American Advancement , and the National Coordinating Committee for Trade Unionists for Action and Democracy. TUAD leaders — Fred Gaboury, Rayfield Mooty, Debbie Albano and Adelaide Bean, along with Labor Today editors Jim Williams and Scott Marshall, helped bring these coalitions together. These labor coalitions, like CLUW, reflected rising communist influence in the labor movement.[2]

In 1973, seven women activists from seven different unions put out the idea of a union women's coalition. The seven included Addie Wyatt, a packinghouse workers' leader; Clara Day, a Teamsters Union leader; and Florence Criley, an electrical workers' leader. Soon they were joined by Barbara Merrill, a welfare worker and a founder of Black Labor Leaders of Chicago. Their work culminated in a national convention to form a "Coalition of Labor Union Women" . The convention opened in Chicago on March 22, 1974.

Eight hundred women were expected but 3,200 came. Many were young; some like participant Bea Lumpkin, not so young. Almost all had come at their own expense. Some thought it was a near miracle that so many women participated. It was no miracle. The mass sentiment was there. Union women were fired up and "not taking it anymore." The ground work had been laid in well-attended regional conferences. Lumpkin got into the action earlier in 1973, at the Midwest Regional Conference of Union Women. It was attended by 200 women from 20 different national unions and from 18 states. Men were invited to join too, to help fight for women's rights. Frank Lumpkin , was one of the first to join CLUW. [3]

“We’re going to use our saw to trim that shrub,” vowed carpenter Pat Stell, using the tools of her trade to describe the role of union women in next year’s presidential campaign. “He is not of sufficient stature to qualify as a bush,” she added to cheers. The vice-president of Washington State Coalition of Labor Union Women welcomed the 800 delegates from local chapters and national unions to that organization’s biennial convention in Seattle, Oct. 9.

CLUW President Gloria Johnson set a tone of determined defiance to the Bush administration “running roughshod over our schools and reproductive rights, invading our privacy, and other nations.” Taking on the Patriot Act and its assault on civil liberties, Johnson challenged the assembly, “Do we want to go back to the days of McCarthyism?” “No!” they roared back. “Hell no!” Johnson added.

CLUW’s role in the 2004 elections is to make the women’s vote the decisive one, said Johnson, who is also a member of the Executive Council of the AFL-CIO. CLUW’s officers represent 17 international unions and the striking diversity of the organization’s membership.

Health care was a major focus of the delegates, with five chapters introducing resolutions in support of HR 676, Rep. John Conyers’ (D-Mich.) bill that would provide expanded and improved Medicare-type coverage for all Americans.

AFL-CIO Executive Vice President Linda Chavez-Thompson put aside formality and her prepared speech to speak to her union sisters “from the heart.” As an overburdened mother and union activist, she said, she had sometimes been discouraged, but it was her anger that kept her going. “As union people, we talk about justice, solidarity, and equality,” said Chavez-Thompson, who started her work life picking cotton in Texas, “but we can’t leave out hope.”

Sen. Patty Murray (D-Wash.) declared that in her state “we don’t just encourage and empower women, we elect ’em.” Both of that state’s U.S. senators are women, as are a majority of its supreme court justices and a larger percentage of state legislators than any other state in the U.S. Murray announced plans for legislation to expand the Family and Medical Leave Act so that parents could take time off work to attend school conferences.

Murray pointed to the convention’s theme “Vision, Voices, Votes” as the same plan of attack that led to victory recently in stopping the Bush administration’s attack on overtime pay. “We need to give people the vision, make their voices heard, and count the votes,” she said.

“In the scheme of things, there are them and us,” said Coalition of Black Trade Unionists President William Lucy, going on to describe “all-out class warfare between those who have the power to make the rich richer and the rest of us who just want a good life.” In the light of 3.1 million jobs lost under Bush, “the stock market going up has nothing to do with you and me,” he added. Lucy asked CLUW members to be recruits in an army to educate the labor movement on the value of labor’s constituency groups. Lucy said these organizations will meet in coming weeks to organize local issue forums and policy seminars. “We need to take the offensive against those who would take us out. We can’t let them pick us off one by one. We are intending to educate this nation about critical issues facing working people. All we have to do is tell the truth.” Lucy called for the rejection of Bush’s $87 billion Iraq fund, calling it merely a down payment for what will be a tremendous financial burden to come.

Christina King, 22, called the convention “an eye-opening experience.” The third-year sound and communications apprentice, a member of IBEW Local 11 in Los Angeles, told Communist Party USA reporter Roberta Wood, “I knew what was going on in the world, it was out there, but I didn’t know how it impacted us, things like health care.”[6]

Delegates to the 17th Coalition of Labor Union Women (CLUW Biennial Convention elected Connie Leak as their new president. She was elected on November 15th, 2013 in Reno, NV. Leak is the seventh president of CLUW and the second UAW woman to hold that position. She has been a member of UAW since 1977, holding elected positions within her local and region. Leak currently serves as International Representative in the UAW Women’s Department. Sister Leak has been a member of CLUW since 1998 and believes, “My personal goal has always been to encourage young women to lead through mentorship, training and example. They are the future leaders in our unions and CLUW.” She had formerly served as a National Vice President.

Under the theme of “CLUW: Moving the Working Women’s Agenda Forward!” five hundred delegates and observers from twenty nine states and Canada engaged in four days of education and activism, setting the agenda for CLUW for the next two years.

On Wednesday, November 13th twenty three workshops were offered covering a variety of topics including; Organizing for Healthcare Justice, The Next Generation: Mentoring Future Union Leaders, Social Media 201,Voter Suppression and Getting out the Vote, and Standing Up to Change Wal-Mart to name a few.

On Friday morning, Laura Reyes, the International Secretary-Treasurer of AFSCME, engaged the delegates when she shared her personal story of moving from care-giver for her physically challenged son to the second highest ranking officer in AFSCME. She urged CLUW activists by exclaiming that, “This is the year of women…so seek out mentors to push beyond our fears and insecurity…”.

The afternoon session opened with a compelling panel entitled “Building an Intergenerational Labor Movement: What You Can Do as a CLUW Activist”. The panel was moderated by Carmen Berkley, the young, newly appointed Director of the AFL-CIO’s Department of Civil, Human and Women’s Rights who was most impressive as she kept the dialogue alive. She was joined by Dina Yarmus, chair of the Philadelphia Chapter’s Young Women’s Committee and Donchele Soper, a member of IBEW Local 1245 and Central California CLUW. They were joined by Carolyn Jacobson, Secretary-Treasurer of the Berger-Marks Foundation and longtime CLUW activist.

The delegates considered a number of resolutions and adopted many, such as those calling for a single payer system so that scarce healthcare resources are not squandered by profiteers, marketing and excessive administrative costs; calling on members to help mobilize the entire labor movement and our allies in the progressive community to defeat the forces of austerity and anti-unionism in the debate over postal reform; that CLUW will fight to ensure that all children have the opportunity to attend great schools that provide a safe and welcoming environment in their own neighborhood; that CLUW calls on all labor unions and pro-working family organizations in the United States, Canada and abroad to join the campaign to support OURWalmart’s call for Wal-Mart to publicly commit to providing workers with good jobs, full-time hours and respect on the job; that CLUW will encourage its members and chapters to incorporate programs about reproductive rights into their normal activity and to do so in conjunction with the Labor and Women’s Community; and, the Coalition of Labor Union Women endorses the Family and Medical Insurance Leave Act (FAMILY Act), sponsored by Senator Kirsten Gillibrand of New York and Representative Rosa DeLauro of Connecticut, which would create a national paid family and medical leave insurance program to ensure people have much-needed income when family and medical needs arise.[8]

The Cuban 5 should be released and returned to their families, declared a resolution passed unanimously by the Coalition of Labor Union Women at its national convention in November. Citing its longstanding role as an advocate for human rights, peace, solidarity and friendly relations with working women around the world, CLUW also urged its members to contact Secretary of State John Kerry, urging the U.S. State Department to grant a visa to Adriana Perez, wife of Cuban 5 prisoner Gerardo Hernandez, in order that she may visit with her husband.

"We Americans would certainly have appreciated it if, before it happened, someone had uncovered and prevented the horrid terrorist plot of 9/11, " said CLUW delegate Diane Mohney, speaking in favor of the resolution. "That's what the Cuban 5 were doing for their country," not spying, she added. Mohney, a retired Philadelphia school nurse.

The resolution was submitted by the Chicago chapter of the coalition. It cited a compelling video by one of the organization's founders, United Farm Workers leader Dolores Huerta. In the video, Huerta dramatically calls for freedom for the five in order "to show the world that the U.S. is a country of compassion, honesty and fairness."[9]

The CLUW is a United Food and Commercial Workers International Union partner.