CAIR - Iowa is affiliated to the Council on American-Islamic Relations. 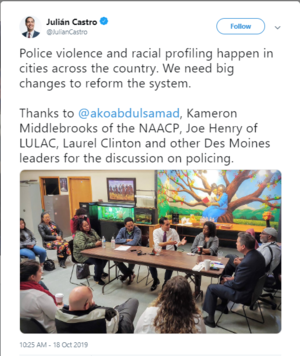 Police violence and racial profiling happen in cities across the country. We need big changes to reform the system.

Thanks to @akoabdulsamad, Ako Abdul Samad of CAIR - Iowa, Kameron Middlebrooks of the NAACP, Joe Henry of LULAC, Laurel Clinton and other Des Moines leaders for the discussion on policing.

Attempts to shut down event 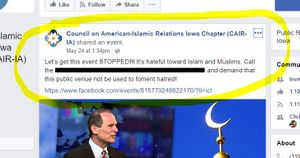 The Iowa chapter of the Council on American-Islamic Relations Iowa Chapter CAIR - Iowa advised their members to shut down an event held by the Iowa-based Cedar Valley Patriots for Christ, referring to it as “hateful toward Islam and Muslims.” The event, according to the Facebook invitation, featured “Author and Historian Bill Federer” who has intensely studied the Qur’an and Islam.[1]

Abshir Omar is board president for CAIR - Iowa.[2]

More than 1,000 Women’s Marchers gathered in Des Moines on Saturday, January 20 2018–the first anniversary of the Trump Administration—to make their voices heard about this administration’s horrific immigration policies, DACA, OUR VOTES, the Muslim Bans, sexual harassment of women, lack of healthcare and government stripping of social services, and so much more.

Under blazing blue skies and unseasonably warm temperatures, CAIR - Iowa Board member Dema Kazkaz of Waterloo gave a resounding speech at the State Capitol to marchers from across Iowa. Dema is the president of the Al-Noor Islamic Center in Waterloo, and a graduate of Hartford Seminary. She is a longtime CAIR - Iowa supporter and our newest board member. As the first speaker, she overwhelmingly set the event’s tone of “If you can’t hear our voice, hear our vote!”

The keynote speaker for the march was Mazahir Salih, the first Muslim (Woman) elected to Iowa City City Council.[3]

Iowa State Rep. Ako Abdul Samad, D-Des Moines, who is chairman of the American Muslim Association, says the organization is not anti-Jewish and it is not anti-Israel. He says it wants a peaceful resolution to the Palestinian-Israeli conflict.

Miriam Amer, executive director of the Iowa chapter of the American Council on Islamic Relations, said Abdul Samad is a founding member of CAIR's Iowa chapter, and described him as a dedicated public servant whose Creative Visions organization helps to feed hundreds of poor Iowans.[4]