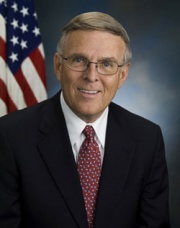 Byron Dorgan is a former Democratic member of the United States Senate, representing North Dakota. He was first elected to his seat in 1992. Prior to his career in the Senate, he was elected in 1980 and served six terms in the U.S. House of Representatives.

Dorgan was raised in Regent, North Dakota. At age 26, he became North Dakota's youngest-ever constitutional officer when he was appointed State Tax Commissioner.

Dorgan is married to Kim Dorgan and has four children: Scott, Shelly (deceased), Brendon, and Haley.

Dorgan is the author of theNew York Timesbestselling book Take This Job and Ship It: How Corporate Greed and Brain-Dead Politics Are Selling Out America, and a newly released book Reckless: How Debt, Deregulation, and Dark Money Nearly Bankrupted America (And How We Can Fix It!).[1]

I'm sending along a list of Congresspeople and senators who know about us, democratic socialism, and -- perhaps Canada.

Only the first one is an open socialist, but the others are sympathetic in varying degrees.

Hope this is of help and you recruit them to the cause!

The Council for a Livable World, founded in 1962 by long-time socialist activist and alleged Soviet agent, Leo Szilard, is a non-profit advocacy organization that seeks to "reduce the danger of nuclear weapons and increase national security", primarily through supporting progressive, congressional candidates who support their policies. The Council supported Byron Dorgan in his successful Senate run as candidate for North Dakota.[2] 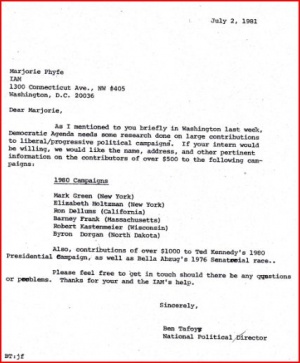 Sen. Byron Dorgan was reelected[3]to a third term in the Senate in November 2004 with nearly 70 percent of the vote after serving two previous terms in the Senate and six terms in the U.S. House of Representatives. He has served in the Democratic Leadership since 1996, first as an assistant Democratic floor leader and currently as chairman of the Senate Democratic Party Policy Committee, a position that he has held since 1998.

As chairman of the Energy and Water Appropriations Subcommittee and a member of the Energy Committee, Dorgan has worked to bring about a new, comprehensive approach on this nation's energy policy. He has been a leader in the Senate in the fight to stop excessive oil speculation and the push for renewable energy, especially in his home state of North Dakota. In addition, Dorgan serves on the Commerce Committee and as chairman of the Committee on Indian Affairs, and he has devoted his career to fighting for the interests of rural America.

Thousands of people in the Red River Valley want to send a message to federal lawmakers and trade negotiators ? they don?t want the Central America Free Trade Agreement (CAFTA).

More than 25,000 people have signed petitions opposing the trade deal that is being promoted by the Bush administration. Residents along the Minnesota-North Dakota border say CAFTA could wipe out the sugar beet industry and many communities along with it.

CAFTA is the first step toward destroying the U.S. sugar program, U.S. Senator Byron Dorgan, D-N.D., said at a news conference Sept. 16, 2004, where he and other elected officials accepted the petitions. It would undermine beet growers in our region and throughout the country, and will export tens of thousands of U.S. jobs.

Most of the signatures on the anti-CAFTA petitions were gathered by farmers and workers employed in the sugar industry, said Mark Froemke, a leader of the Bakery, Confectionery, Tobacco & Grain Millers, the union representing workers at the sugar processing plants in North Dakota and Minnesota.

According to Boston Democratic Socialists of America's The Yankee Radical June 2009;[5]

This travel ban, enacted in 1962, is now under attack from a left-right coalition including the Chamber of Commerce, agribusiness, Human Rights Watch and civil liberties groups. The other side, comprised of cold war hard liners and much of the Cuban émigré community, is using the lack of free elections and democratic rights in Cuba as arguments for keeping the ban. Although as Sam Farber notes in his recent book on the Cuban revolution, the original justification for the travel ban and trade embargo had nothing to do with reasons like these—it was Castro’s interference with the “freedom” of American corporations to dominate the Cuban economy.

According to Amnesty International, Cuba now has 58 political “prisoners of conscience”, down from the thousands of years past. Amnesty nonetheless opposes the American trade embargo and travel ban, as do most Cubans, including Oswaldo Paya, the leading democratic oppositionist. And this year efforts to at least lift the travel ban might actually succeed, give[[n our new President and Democratic Congress. The Senate bill, S.428, is sponsored by Senator Byron Dorgan (D-ND) and Dick Lugar (R-IN); in the House, Cape Cod Congressman]] Bill Delahunt is a key advocate. Contact his office for more information..

“Punishing the American people in our effort to somehow deal a blow to the Castro government has not made any sense at all,” said Sen. Byron Dorgan, D-N.D., earlier this spring. Byron is a sponsor of the Senate bill. “At long last, this policy, which has been in place for 50 years and has not worked, will finally be removed,” he said. [6]

Landrieu, chairwoman of the Senate Committee on Small Business and Entrepreneurship, wrote to Treasury Secretary Timothy Geithner requesting that changes in American telecommunications policy toward Cuba include access to new exports and opportunities for U.S. small businesses.

In April, President Barack Obama announced of a series of changes to limits on travel and gifts from the U.S. to Cuba, as well as the authorization of greater telecommunications links between the two countries.

"As the administration negotiates with the Cuban government and comes up with new regulations, we would respectfully request your consideration to make U.S. small business interests a priority in these discussions," the senators wrote. "Small businesses are the engine of the American economy and, now more than ever, deserve a level playing field for new opportunities in Cuba. "