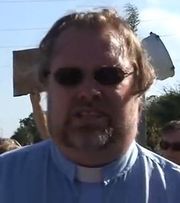 Rev. Dr. Bruce Wright has a doctorate in Ministry and Master's in Pastoral Psychology. He is a licensed addictions and domestic violence counselor. He is a Baptist Pastor and Director of Refuge Ministries who serves on the Executive Director of the Poor People's Economic Human Rights Campaign. The Refuge has been around for 20 years and, the Poor People's Campaign for 15 years. The Campaign has 120 organizations of poor and homeless that are members including the Refuge. He is part of St. Pete For Peace and the Homeless Coalition, as well as the League of Revolutionaries for a New America. A musician and a poet, he has 2 children, one in College.[1]

He is a leader of the struggle to make the government provide homes. He discusses topics such as the true meaning of Jesus in a Biblical sense, versus how capitalism has portrayed Him, and why right-wing teachings contradict Christ.[2]

He is based in St. Petersburg Florida. Co-Chair, Pinellas County Green Party (Florida)

Rev. Wright is an independant journalist and Freelance writer. He hosts a weekly radio show called the Revolutionary Road Radio show on the TanTalk network Tampa Bay and has written for numerous publications including People's Tribune, Oped News, Counterpunch, Squatter productions and have self published. In addition to his work as a Baptist Pastor and Director of Refuge Ministries, he also serves on the Executive Committee of the Poor People’s Economic Human Rights Campaign.[3]

As a long-time member of the Green Party for many years, I worked on Cheri Honkala's campaign for Vice President, along with Jill Stein for President. I also host the Revolutionary Road Radio Show on 1340 AM in Clearwater, Florida.

I am currently at USFSP working on another Degree in Interdisciplinary Social Sciences (ISS) with a concentration in Political Science and Anthropology. I am President of a Student Organization called Students for a Democratic Society on the St. Pete Campus, which is a nationwide group on more than 100 campuses nationwide.[5]

Speakers for a New America

On October 27th 2007, United for Peace and Justice held an Anti-war National Mobilization, near Orlando, Florida at Lake Eola.[6]

Key organizers of the October2011 movement include;[7]

Bruce Wright is a past recipient of Asian Americans for Equality's annual Dream of Equality award.[8]