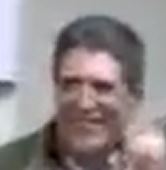 Brian Steinberg is a prominent Connecticut Communist Party USA activist and was the husband of the late Merrillee Milstein. He has been involved with the party since around 1969.

In January 31 2004 Brian Steinberg participated[2]in the Communist Party's conference on the 2004 elections in New York City. 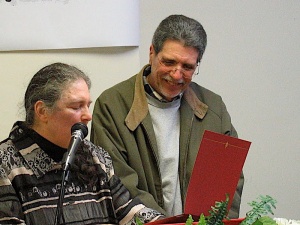 The diverse and inspired overflow crowd stayed to the end of the remarkable celebration of People's World Amistad Award honorees Anna Montalvo, Gwen Mills and Art Perry on the occasion of the 90th anniversary of the Communist Party USA, Dec. 2009. The theme of the event was "Keep the Ball Rolling....to win jobs with union rights, health care, peace and equality!" Unity and struggle were the messages of the day.

Everyone was thrilled by Aishah Jenkins and Kendra Streater two high school students who performed "Stand by Me" with piano and bass accompaniment.

Joelle Fishman presented the afternoon's call to action for organizing the unorganized, building even bigger grass roots mobilization on the issues including health care, no troops to Afghanistan, public works job creation and the employee free choice act. She presented certificates of appreciation to Dorothy Johnson and Brian Steinberg for their tireless work over many years delivering the People's Weekly World to workers' homes and getting them involved in the struggle.

Applause greeted the announcement that the People's World now daily on-line will have a mini Connecticut print edition as of January, when the national print edition ends.

The 90th anniversary of the Communist Party proud was done proud![4]