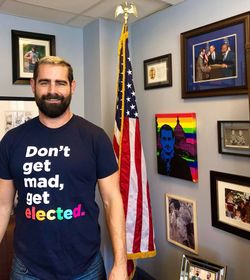 Brian Sims is a State Representative in Pennsylvania. He is running for Lt. Governor.

He received notoriety in 2019 for harassing an elderly women and young teenagers who were protesting a Planned Parenthood on two separate occasions.[1]

A staunch advocate for Lesbian, Gay, Bisexual, and Transgender (LGBT) civil rights, Sims has been credited with successfully lobbying U.S. Senators Bob Casey (D-Pa.) and Pat Toomey (R-Pa.) to publicly support marriage equality and the LGBT-inclusive Employment Nondiscrimination Act (ENDA), respectively. Sims continues to be a leading advocate for LGBT and women’s rights in the General Assembly while garnering wide attention for his commitment to bipartisanship and collaboration between the Commonwealth’s Democratic and Republican parties.

In November 2013, U.S. Ambassador to Japan Caroline Kennedy invited Sims to deliver a keynote address at her swearing-in ceremony and participate in a weeklong series of lectures and programs commemorating the 65th anniversary of the signing of the United Nations’ Universal Declaration of Human Rights in Tokyo, Japan. While in Japan, Sims met with students, advocates, legislators, attorneys, and academics to discuss issues of equality and human rights.

Prior to his election to public office, Sims was a distinguished policy attorney and civil rights advocate who served as staff counsel for policy and planning at the Philadelphia Bar Association. He also served as both the president of the board of directors of Equality Pennsylvania and as chairman of Gay and Lesbian Lawyers of Philadelphia (GALLOP).

During his time at the Bar Association, Sims worked with attorneys, legislators, and community organizations on issues ranging from gender and pay inequity to environmental regulation. A member of the national campaign board of the Gay & Lesbian Victory Fund until August 2011, Sims continues to lecture regularly about the policy and legal challenges facing the LGBT civil rights movement.

He earned a bachelor of science degree from Bloomsburg University of Pennsylvania and a juris doctor degree in international and comparative law from the Michigan State University College of Law.

In 2000, Sims, the son of two retired Army lieutenant colonels, came out to his football team after helping to lead them to the Division II national championship game as their captain. He remains the only former NCAA football captain to have ever come out, and is one of the most notable collegiate athletes to do so in any sport.

Today, he continues to serve on the GLSEN Sports Advisory Council, the GO! Athletes Advisory Board, and the Campus Pride Board of Directors. In addition to various local and regional awards and honors, Sims is the recipient of the 2014 National Champion of Choice Award from NARAL Pro-Choice America, and the American Bar Association Commission on Sexual Orientation and Gender Identity’s national Stonewall Award.

As a state legislator, he is honored to represent the neighborhoods of Pennsylvania’s 182nd District: Rittenhouse, Fitler and Logan Squares, the Gayborhood, and parts of Washington Square West, Bella Vista, Hawthorne, and East Passyunk.

He is dedicated to making Philadelphia safer, strengthening and protecting public education, preserving services for seniors and other vulnerable Pennsylvanians, making affordable health care more available, expanding civil rights for all Pennsylvanians, preserving our environment while investing in alternative energy, creating jobs and cleaning up Harrisburg. 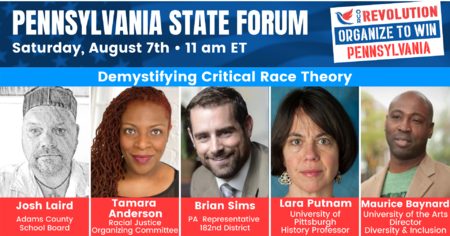 "Fall is almost here and students will soon be back in the classroom. But before one student has even set foot in a classroom, communities across PA and the United States are negotiating concerns from parents and residents about Critical Race Theory.

Join us, August 7th, for a discussion about Critical Race Theory. We'll explain how you can effectively rebut this manufactured and opportunistic right-wing media talking point."

Throughout the event, Kimberle Crenshaw and Derrick Bell were on the screen with the quote: "Through the study of law and U.S. history, [Critical Race Theory] attempts to reveal how racial oppression shaped the legal fabric of the U.S. [It] is traditionally less concerned with how racism manifests itself in interactions with individuals and more concerned with how racism has been, and is, codified into the law."