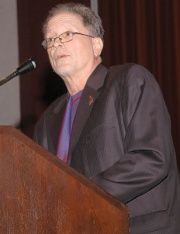 William (Bill) Charles Ayers (born Dec. 26, 1944) is a former leader of the terrorist Weather Underground and an associate of President Barack Obama. Ayers was also known as Michael Joseph Rafferty Jr., Jules Michael Taylor and Hank Anderson. He was one of the authors of the "Weatherman Statement" upon which the Weather Underground Organization was founded in 1969 and has been considered to be one of the leaders of the organization since its founding. Although Ayers was not arrested during the WUO "Days of Rage", he was one of the leaders of these riots. Ayers was also one of the more influential people attending the WUO "Flint, Michigan War Council". He submerged into the underground in early 1970.[1]

He is the husband of Bernardine Dohrn. His father is Thomas G. Ayers.

Bill Ayers' younger brother Richard James Ayers was being sought by the FBI for desertion from the military service in 1976.[1] 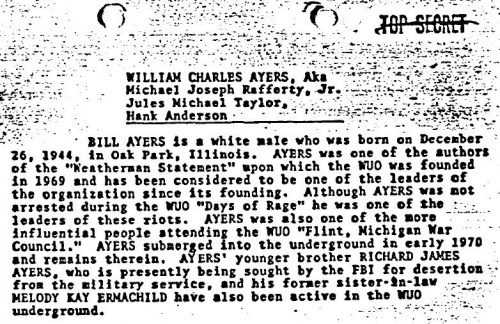 According to a federal indictment, a smaller group, Bill Ayers, Bernardine Dohrn, Linda Evans, Erik Mann, Howard Machtinger, Diana Oughton and Mark Rudd, met secretly in Flint on December 30, 1969 at the Parish House of Sacred Heart Convent to set up a central committee. It was modeled after Lenin’s democratic centralism. The Weather central committte was to direct underground bombings nationwide from New York, Chicago, Detroit and Berkeley aimed at police, military, university and commercial targets. There was also talk of assassinations. The Liberation News Service reported, “Part of armed struggle, as Dohrn and others laid it down, is terrorism. Political assassination… and… violence…were put forward as legitimate forms of armed struggle.[4].”

Eric Mann, soon became an SDS defector and a Flint Police informant. He reported a man dressed as a priest distributing 200 sticks of dynamite in the parking lot to drivers of cars with license plates from New York, Washington, Colorado, Wisconsin, Illinois, Ohio and Pennsylvania, including Theodore Gold, New York[5].

On August 15, 1969, it was learned that Ayers was scheduling himself to depart for Canada that date for the purpose of conferring with a group of thirty individuals who had been in Cuba during the recent past and who were due to arrive by boat on August 16, 1969. Among those individuals returning to the United States via Canada at that time were such WUO functionaries as Ted Gold, Bernardine Dohrn, Diana Oughton, Dionne Donghi and Eleanor Raskin.[1]

On July 29, 1969, Ayers made a speech on the campus of the University of Oregon, Eugene, Oregon, during which time he discussed the Students for a Democratic Society's role in the Venceremos Brigade and promoted this trip to Cuba. During the course of this speech, Ayers commented as follows in response to a question about the Brigade:

"In November and beginning January, SDS was involved in sending 150 people, both times to Cuba to cut cane, to cut sugar, as part of Cuba's program to create, to put out 50 million, or what is it 100 million, 10 million tons of sugar.
They are not being paid because they are not honkeys who need to get paid in order to do something, in order to serve the people, and what they're going to do is, there will be about 75 SDS people on each trip and about 75 people from, recruited from the Black Panther Party and Young (illegible) organizations, and other black and brown organizations that will go to Cuba, are going to live and learn about the country, by going to work to create and help the Cubans create a solid economy in the face of an economic boycott by the United States, in the face of constant threats from the United States, in fact a couple of invasions that didn't work because the Cuban peopled were too well armed and well educated. The Venceremos Brigade is an idea which is an attempt to show the people of the world that all Americans aren't solid in their support of teh economic boycott of Cuba, and so we are going to go and we are going to attempt to, attempt to help the Cubans in their efforts. David Johns from the SDS National Office is one person who's going on that trip, other people from here who are interested should talk to Bill Thomas from Portland afterwards because he's got, in Portland, he's got applications. It's a simple matter, if you're under 17 you need your parents' permission. Yes."[1]

In about 1970, after the WUO had submerged into an underground status, Bill Ayers and Naomi Jaffe traveled to Canada for the purpose of meeting with representatives of the Quebec Liberation Front. When the pair returned, Ayers had $2,000 in his possession that he definitely did not have when Jaffe and he went into Canada.[1] 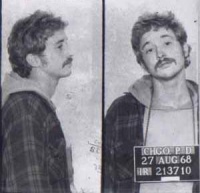 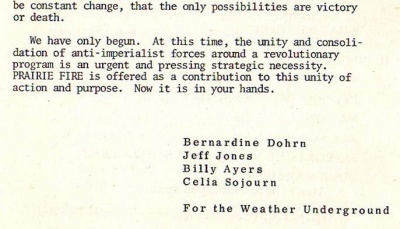 In 1994 Bill Ayers and Bernardine Dohrn, Chicago were listed on a "Membership, Subscription and Mailing List" for the Chicago Committees of Correspondence, an offshoot of the Communist Party USA[6]

Bill Ayers, Carl Davidson and Mike Klonsky all appeared on the Committees of Correspondence list mentioned above. The three former Students for a Democratic Society leaders have remained friends through the years, despite belonging to different political factions.

On a comment on the New Zeal blog an anonymous coorresponedent challenged Carl Davidson[7];

Make sure you mention your recent relationships with Bill Ayers and Mike Klonsky. The truth will set you free...

Bill and Mike and I have been friends since the SDS days of the 1960s--although Mike and I bitterly opposed the Weatherunderground nonsense back then when it counted. All that is well known to those who care about such things. What's silly is the notion that any of us shape the politics of Barack Obama.

“I can remember being one of a small group of people who came to Bill Ayers’ house to learn that Alice Palmer was stepping down from the senate and running for Congress,” said Dr. Quentin Young, a prominent Chicago physician of the informal gathering at the home of Ayers and his wife, Dohrn. “[Palmer] identified [Obama] as her successor.”

Barack Obama and Alice Palmer “were both there,” he said.

"Small Schools Workshop" in Chicago, circa 1999/2000. Under the heading of Who We Are, the following were listed: 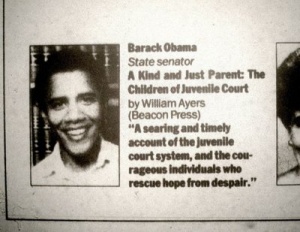 Later Ayers worked with Obama on the board of the Woods Fund. together doling out millions to leftist causes.

On Nov. 20th, 1997, Michelle Obama, who was then Associate Dean of Student Services and Director of the University Community Service Center, invited William Ayers to speak on juvenile justice. Ayers was joined by Barack Obama who also spoke during the event on working to combat legislation that would put more juvenile offenders into the adult system.[9]

Bill Ayers and Barack Obama spoke together at a public gathering sponsored by The Center for Public Intellectuals & the University of Illinois-Chicago, April 19th-20th, 2002, at the Chicago Illini Union;

"Intellectuals: Who Needs Them?

IV. Intellectuals in Times of Crisis

Experiences and applications of intellectual work in urgent situations.

Bill Ayers served on the Board of the Woods Fund of Chicago from 2004 - 2008. He was serving on the Board as at 2008.[11] The Fund was established in 1941 and is a private philanthropic foundation that makes grants in metropolitan Chicago, Illinois. Woods Fund "supports nonprofits in their important roles of engaging people in civic life, addressing the causes of poverty and other challenges facing the region, promoting more effective public policies, reducing racism and other barriers to equal opportunity, and building a sense of community and common ground".[12] 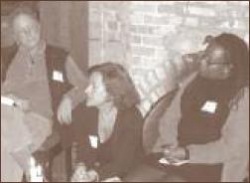 In fall of 2005, Crossroads Fund worked closely with donors and board members to put together house parties featuring discussion on critical community issues, and also raise money for Crossroads Fund.

Bill Ayers and Bernardine Dohrn, along with Yvonne Welbon and Dorian Warren hosted a group of donors and friends as they "engaged in a lively discussion about political participation in Chicago"[13].

Crossroads Fund is working to understand how to support participation in the electoral process on an on-going basis, making government more accessible and accountable to voters and tax-payers. 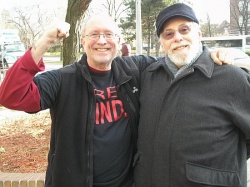 A demo outside a Marine Corps recruiting center, on busy Grand River Avenue, opposite the MSU campus, was abbreviated due to the frigid temperatures. But later in the day, an SDS reunion held in MSU’s South Kedzie Hall, "warmed hearts and fired up the activists – young and old". Bob Meola, an MSU SDS alumnus, emceed the affair which featured speeches by Cole Smith of Ignite, Al Haber, Bernardine Dohrn Bill Ayers and the "man of the hour" – Bert Garskof who had been the faculty advisor to the original MSU SDS chapter. Garskof, fired by MSU for his "devotion to his students and the Movement", was described by Ayers as “a mentor, an inspiration”.

Movement for a Democratic Society

One of the events listed was;

In the videos to the right, Bill Ayers refers to Movement for a Democratic Society as "our work" and expresses enthusiasm for building alliances and using the U.S. elections to enlists "hundreds of thousands" of young people to his cause.

Janice Misurell-Mitchell traveled to Cuba[16]for six days in September 2007 with several colleagues as part of a conference on “Useful Art”, or art that includes aspects of social activism.

Our work was to present lectures and informal sessions, films and videos and performances.

While Tom, Bernadine and Bill met with visual art students at the offices of the journal Criterio, I presented three sessions to music students at the Instituto Superior de Arte. 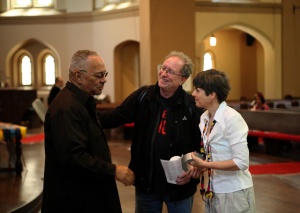 Jeremiah Wright, Bill Ayers and Rebekah Levin of Committee for a Just Peace in Israel and Palestine

On May 18, 2009, Jeremiah Wright and Bill Ayers addressed a crowd of more than 400 at the First United Church of Oak Park during a forum before an annual walk calling for a just solution to the Israeli-Palestinian conflict. During his speech, Ayers poked fun at his "terrorist" label that of a "fiery preacher" given to Wright. The rally was organized by the Committee for a Just Peace in Israel and Palestine.[17]

As of 2009 Bill Ayers was a member of the Editorial Board of Chicago based socialist journal In These Times.[18] 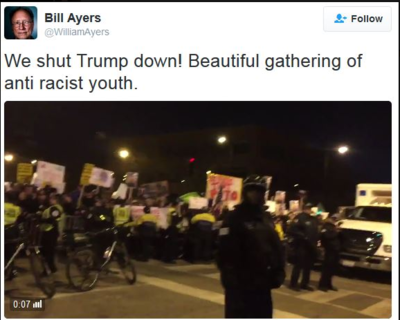 REFUSE FASCISM is an anti-Trump project of the Revolutionary Communist Party.

Bill Ayers was a signer/supporter of a "refuse fascism" "Call" entitled "We Refuse to Accept a Fascist America" (copied from the internet at https://refusefascism.org/we-refuse-to- accept-a-fascist-America/. Printed 1/06/2017 from the internet. The "Call" was undated but it referred to "Trump, the President-elect" and "We therefore CALL FOR A MONTH OF RESISTANCE beginning on December 19th, reaching a crescendo by the January 20th 2017 Inauguration".

all the others signers from the list above will be also be found under the Revolutionary Communist Party (RCP) site regarding a full listing of this "Call".

Hollywood star Danny Glover, philosopher Grace Lee Boggs and ten others have released a public statement backing the cultural boycott of Israel and denouncing the inclusion of the film that they appear in "American Revolutionary: the Evolution of Grace Lee Boggs" in an Israeli government-sponsored film festival.

“We stand in solidarity with the people of Palestine, and support their call for cultural and academic boycott of Israel,” Glover and others say in a statement sent to the online news publication, The Electronic Intifada . The statement is co-signed with ten other individuals involved with the award-winning documentary that focuses on the life and work of the 98-year-old Boggs.