Bernard Rapoport was the Founder and Former President, Chairman and CEO of American Income Life Insurance Company. He and his wife also established the Bernard & Audre Rapoport Foundation, to which they make annual contributions for education, health care, and the community of Waco, Texas.[1]

Bernard Rapoport, the founder of an insurance company who became a linchpin of the "beleaguered community of Texas liberals", died on April 5 2012, in Waco, Tex. He was 94.

A major donor to Democratic candidates, progressive causes, Israel and the University of Texas, Mr. Rapoport called himself a “capitalist with a conscience,” using the phrase in the title of a 2002 memoir.

Besides his granddaughter Abby Rapoport, Mr. Rapoport was survived by his wife; his son, Ronald Rapoport; and another granddaughter, Emily Rapoport.[2]

Bernard Rapoport was born in San Antonio on July 17, 1917, the son of Russian immigrants; his father had been sent to Siberia in 1905 for taking part in a demonstration in St. Petersburg. He would say: “My father taught me Marxism and hard work. My mother taught me to love learning.”

At the University of Texas, he was inspired by left-leaning professors of economics, and his thinking would later evolve into New Deal capitalism. 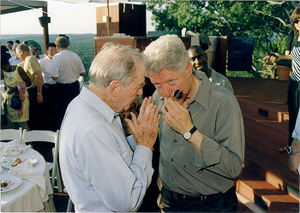 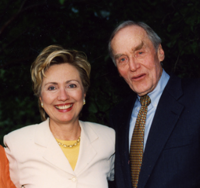 As Texas swung from a Democratic stronghold to an increasingly Republican and conservative state, Bernard Rapoport continued to support liberal Democrats and their causes, both with his money and his extensive national political connections. He was an ally of Ann W. Richards, the state’s last Democratic governor, who appointed him to the University of Texas Board of Regents in 1991.

Ralph Nader, the consumer advocate, called Mr. Rapoport one of the most progressive corporate executives in the country, adding that Mr. Rapoport often expressed concern about the growth of companies so large that their failure could threaten the nation’s economy.

“I can’t tell you how many times he started a conversation with, ‘What are we going to do about bigness?’ ” Mr. Nader said.[4]

Rapoport was a lifelong supporter of the Democratic Party, starting with Homer Rainey's gubernatorial campaign in 1946. He later supported Ralph Yarborough, Frances Farenthold, Ted Kennedy, Alan Cranston, and George McGovern, during whose campaign in 1972 Bernard met Bill Clinton and Hillary Rodham. From 1974 onward, Rapoport donated to every one of Bill Clinton's campaigns and served as fundraiser for both presidential bids.[5]

In 1990, Bernard Rapoport got a call from Tony Mazzocchi–the Oil, Chemical & Atomic Workers union official who was so disillusioned with the Democratic Party that he founded a Labor Party. Mazzocchi told Rapoport there was not an American politician he cared about. Yet he was asking Rapoport–the insurance company executive and former U.T. Board of Regents chair –to contribute to a candidate in a U.S. senate race.

“Tony told me Paul Wellstone believes in everything we believe in,” said Rapoport. The man who inspired Mazzocchi to suspend his boycott of Democratic political candidates was a political science professor who had joined Hormel workers on a picket line and gone to jail for protesting unfair lending practices. Rapoport promised to “open up the bank” for Wellstone. Mazzocchi promised he wouldn’t be disappointed. Paul Wellstone, Mazzocchi predicted, would not waver from his principles. [7]

In 1951, Rapoport borrowed $25,000 and founded the American Income Life Insurance Company, which marketed itself to labor unions and their members.

He gave millions to the University of Texas for scholarships, and endowed chairs and professorships that focused on human rights and ethics. He gave to causes in Israel that sought accommodation with the Palestinians.

Mr. Rapoport also supported liberal publications like The Nation and The Texas Observer.

Ronnie Dugger, the founding editor of The Observer, recalled visiting Mr. Rapoport in Waco in 1955 to discuss his buying advertising for his insurance company. Mr. Dugger opened their conversation, he said, by stating that since life insurance is based largely on actuarial tables, there was no need for commercial competition, and “it ought to be nationalized.”

Mr. Rapoport startled him by saying, “I agree with you.” He went on to buy ads for decades.

Mr. Rapoport provided financial support to Democratic officeholders in trouble, including Webster L. Hubbell, a Justice Department official in the Clinton administration who left under a cloud over billing irregularities at his law firm. Mr. Hubbell would later plead guilty to fraud charges and spend time in prison.

Mr. Rapoport was called to testify before a grand jury about $18,000 in payments his company had made to Mr. Hubbell. While critics of Mr. Clinton characterized such payments from Mr. Rapoport and others as hush money, Mr. Rapoport said it had been for legal and consulting services. The grand jury took no action against him.[8]

Institute for Policy Studies founder Marcus Raskin penned a eulogy to to the late Bernard Rapoport, 'Remembering Bernard "B." Rapoport', April 23, 2012, for the IPS website;[9]

I first met B. a half century ago at the home of Sam Rubin on 64th Street in Manhattan. Immediately, we were deep in conversation about the need to support groups vital to a vibrant democracy, like the Center for the Study of Democratic Institutions. Both of us put a priority on sustained practical action. Both of us admired many of the same people. Two, like B., had an astuteness for business and independent radical politics: Henry Wallace, the Progressive Party candidate who served as vice president under FDR, and F. Palmer Weber.

For the next 50 years, B. and I talked often, meeting at the St. Regis Hotel every time he came to Washington. Part of what made the visits memorable were that B.’s remarkable wife, Audre, and often their accomplished son, Ronnie, and his family. B. would often phone me at 5 or 6 a.m., discussing those on the front lines of the struggle against poverty and inequality.

B. and I were intertwined as he was with many others, perhaps too many to count. We worked on common projects for the common good. He was a mensch whose task was to make the lives of people one degree better, so long as they were committed to human dignity.

B. identified deeply with those who suffered most. He remained passionate about labor unions even in times when some liberals shunned them. He never forgot his roots, some of which were communist and humanist.

Through his long life, B. retained his passion for independent projects, such as the Texas Observer, and the Institute for Policy Studies, which I co-founded and he supported for almost 50 years. He had great affection for my colleagues at IPS, including writer Barbara Ehrenreich and former director Robert Borosage, who went on to build the Campaign for America's Future.

B. was a man of ideas. He was nimble to adapt to the times, and understood that today’s movement for the 99 percent had its roots in many earlier social movements.

B.’s vision lives on in Audre, Ronnie, and Ronnie’s family, wonderful people about whom B. never tired of sharing stories. B.’s granddaughter Abby, an unusually perceptive journalist, interned at IPS the summer before Barack Obama’s election and helped IPS assemble a detailed “Mandate for Change” for the Obama presidency.

A few months ago, I played the piano at the home of Ann Janss in Los Angeles. One piece that I performed was the second movement of Beethoven’s “Emperor” Concerto. To B., our beloved friend, I dedicate my rendition of this Concerto.

In 1993 Rapoport was listed[10] among former "Trustees" of the Institute for Policy Studies, Washington DC.

Bernard Rapoport serves[11]on the Board of Directors of the Economic Policy Institute.

Rapoport was mentioned in the acknowledgments of the PublicAffairs Books-published book The Hammer: Tom Delay, God, Money, and the Rise of the Republican Congress, by Louis DuBose and Jan Reid. He was mentioned with his wife, Audre Rapoport, for having supported the authors during the process of the book's creation and for having proposed the idea of the book.[12]

In 2010, Bernard Rapoport, Chairman and CEO of American Income Life Insurance Co., was listed as serving on the advisory board of the Democratic Socialists of America dominated National Jobs For All Coalition.[13]