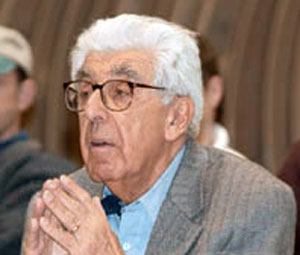 In The Times Founding sponsors

In 1976 founding sponsors of the Institute for Policy Studies/New American Movement linked socialist journal were;

Keynote speaker Barry Commoner stated that "understanding energy" policy, options and, strategy was the way "to get a grip on the politics of the 80's." He expressed deep concern over the narrowing liberal majority in Congress, and opposition to the Defense Department's organizing a special "ready response" strike force that could be used to defend Middle East oil fields. Commoner asserted that inflation was the result of not having a federal energy program and plugged his embryonic Citizens Party.[2]

At the 1987 National Rainbow convention in Raleigh North Carolina, a new board was elected, which included Barry Commoner.

The Committee for Responsive Democracy began a series of hearings in New York, on November 13, 1990, on the "need for significant reform of the two party political system, as well as the feasibility of forming a new party". Sixteen hearings were planned, in eight major cities across the US. New York City Comptroller Liz Holtzman greeted the commission, saying that "many people don't see themselves as being represented".

In 1996 Barry Commoner, Queens College was one of the original 130 founders of Campaign for America's Future.[5]