Barry Alan Bluestone is currently the director of the Dukakis Center for Urban and Regional Policy at Northeastern University and also founding dean of its School of Public Policy and Urban Affairs. He has served as a member of the senior policy staff of Congressman Richard Gephardt. Among his many accomplishments he was the Founding Director of U.Mass.-Boston’s Ph.D. Program in Public Policy.[1]

Northeastern University founded the School of Public Policy and Urban Affairs 10 years ago to provide a space for applied interdisciplinary research. Since then, the School has created a tradition of high-impact research, education and engagement with communities of practitioners in the public, private and nonprofit sectors.

To celebrate this milestone, we shine the spotlight on our service-oriented initiatives and research centers and labs, which have advanced public policy and urban affairs theory and practice not just in Boston, but around the nation and the globe.

Founded in 1999, the Dukakis Center is a “think and do tank” that conducts interdisciplinary research, in collaboration with civic leaders, to identify and implement solutions to a broad spectrum of critical challenges facing urban areas throughout the Commonwealth.

Since its inception, the center has been involved in a wide array of research focusing on housing in Greater Boston. Each year staff dive into data and publish an annual edition of the “Greater Boston Housing Report Card,” which keeps track of home prices, rents, housing production and policy, and other matters related to housing availability and affordability.

“Each annual report takes a deep dive into specific topics,” said Barry Bluestone, senior research associate and founding director, 1999 to 2015. “In the past these have ranged from homelessness to student housing, from the need for zoning reform to the cost of producing new housing.”[2] 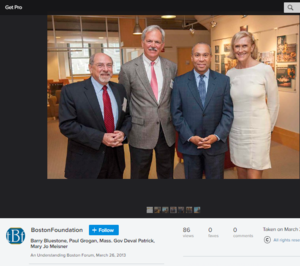 Students for a Democratic Society

In 1962, Detroit UAW official Mildred Jeffrey arranged[3]for her daughter, Sharon, and a group of politically active University of Michigan students, including Tom Hayden, to use an UAW camp[4]on Lake Huron. The students issued the Port Huron Statement, the founding document of Students for a Democratic Society (SDS).

In 1968, Barry Bluestone was a founding member of the Union for Radical Political Economics, an alternative professional organization for left political economists and an intellectual home for academics, policy-makers, and activists.[6]

In 1980, Barry Bluestone traveled with a delegation to Cuba.

In 1996 Barry Bluestone, Northeastern University, Boston was one of the original 130 founders of Campaign for America's Future.[7]

In 2001, Boston Democratic Socialists of America held monthly talks on different aspects of the global economy bring in 40 to 60 people. Presentations included economist Barry Bluestone on “Wall Street vs. Main Street;” a discussion of genetic engineering and corporate agriculture; and a meeting on “Global Warming: the Heat Is On.”[8]