Barney McClelland is a Maine activist. 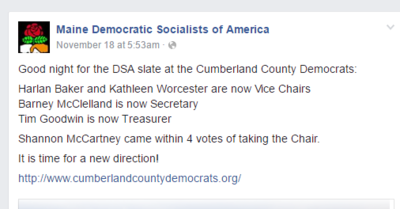 Maine Democratic Socialists of America posted on Facebook November 18 206 at 5:53am ·

Good night for the DSA slate at the Cumberland County Democrats:

Shannon McCartney came within 4 votes of taking the Chair.

It is time for a new direction! 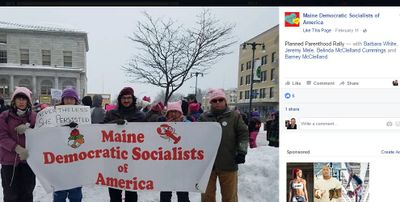 DSA FOLKS and others who care about workers struggles... AT&T ON STRIKE. If you are kicking around Portland this weekend, stop by the Marginal Way store and spread some SOLIDARITY.... and bring water and fruit and chips and cookies. An injury to one is an injury to all. #NOOUTSOURCING — with Kevin M. Ready, Barney McClelland, Seth Baker, Vanessa Sylvester and Mike Sylvester.

March 2017, Portland joined several cities across the nation for a series of rallies under the name, “The People’s Defense.” Protests were centered around the slogan: We Object. Pro-democracy and civil rights advocates objected to a number of issues — Trump’s travel ban, spikes in hate crimes, health care reform, budget cuts to the EPA, Internet privacy — but most were focused on what they considered the most pressing and important: the nomination of Trump’s pick for Supreme Court Judge, Neil Gorsuch.

About 150 voters gathered on Sunday at Portland’s City Hall to object to Gorsuch, a candidate who’s both praised and criticized for his conservative views and strict constitutionalist perspective. One can see the ideological divide over Gorsuch locally in recent stories from the Portland Press Herald which report that a group of 98 Maine lawyers wrote and signed a letter in opposition to Gorsuch to Maine’s Senators, while a separate group of 49 signed one in support. 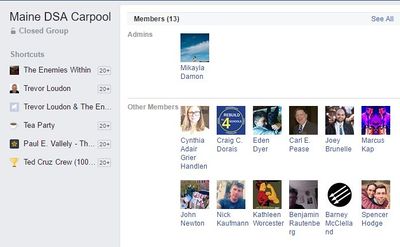 Maine Democratic Socialists of America Public Facebook Group, as of May 12, 2017;[5]

"Say no to racism"

Tonight’s Say NO to Racism stand. Monument Square is fast becoming Portland’s answer to London’s Hyde Park. In addition to us there was a demonstration against the killings in Gaza,a lone demonstrator asking us to believe in God, petitioners for Planned Parenthood, and leafleting for the League of Women Voter’s guide for the June elections. — with Craig C. Dorais, Tim Goodwin, Barney McClelland, Bob Maheu, Eileen Manglass, Shaaron Hendry, Seth Berner and Barbara White. 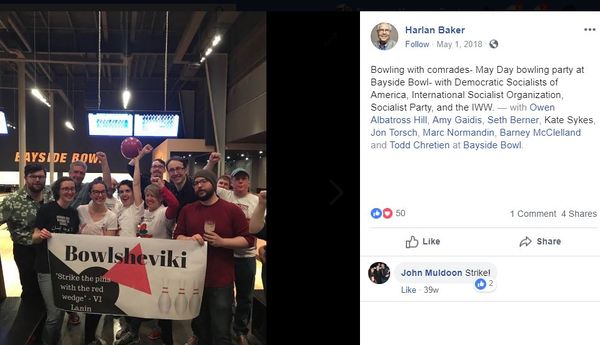 In 1983 Barney McClelland was a freelance writer from West Lafayette, Indiana and a DSA member. [8]