Barbara Shailor was a founder of Jobs with Justice a labor organization/campaign that worked to organize janitors, maintenance personnel, etc. She later became a leader of the AFL-CIO, around 2001, as Director of its' AFL-CIO International Affairs Division. 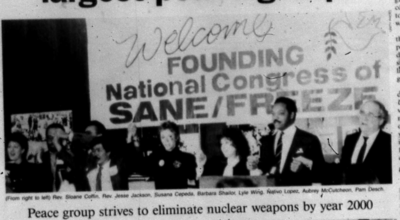 An article in the marxist/socialist newspaper Socialist Worker , September 14, 2001, Page 15, "Riley brings Charleston Five struggle to JwJ conference", by Lee Sustar, Cleveland, summed up some of the speakers and issues at this conference.

"The reason this struggle has been successful so far is because of international solidarity," said Riley, president of International Longshoremen's Association ILA Local 1422 in Charleston, South Carolina."

"The Charleston Five are ILA members who have been under house arrest for 19 months -- and who fact up to five years in prison on trumped-up charges following a police attack on their picket line."

"The previous evening, United Steelworkers of America USWA President Leo Gerard brought the crowd to its feet when he denounced the repressive tactics used against global justice activists as an attempt to 'criminalize dissent.'"

"About 1,000 people, including 150 students, attended JwJ's biggest and liveliest event."

"One highlight was an international solidarity panel, featuring speakers from Haiti, France, South Africa and Brazil and chaired by Barbara Shailor, a JwJ founder who is now director of the AFL-CIO's International Affairs Department."

"It has not been since the '30s, when communists and socialists played a major role in organizing the CIO, that leftists and liberals and trade unions joined forced in demanding greater rights for the poor and working people," she said.

"Shailor's remarks highlighted the changes from the days when the AFL-CIO's international policy reflected the Cold War agenda of the U.S. go vernment." (Sustar's comment)... and "The conference brought together some of the most committed activists in the labor and student movements."

(KW: The AFL-CIO helped to defeat the Communist labor unions in France and especially Italy in their attempts to seize power after WW2. They also gave covert support to other labor movements fighting communist infiltration, as well as open support, depending on how safe it was for their staff to do so.

Members of the selection panel were;[2]

"Prior to her appointment, Shailor was the director of the International Department of the AFL-CIO, the country's largest union, and served as senior advisor to the union's President John Sweeney on foreign and international policy issues. She is also a member of the Council on Foreign Relations."

"Shailor herself is tied to some of the same Apollo radicals (named in the article). She reportedly worked closely at AFL-CIO with activist Bill Fletcher, Jr., a former Maoist and current leader of Democratic Socialists of America . Fletcher was also a founder of the Black Radical Congress , closely linked to the Communist Party USA (CPUSA), which advocated for 'progressive social justice, racial equality and economic justice goals within the U.S.'"

"Shailor reportedly worked with Fletcher to shape the AFL-CIO's international work in what the union described as 'dramatically new directions"."

Regarding her husband, Klein wrote:

"A recent State Department appointee is wife to the founder of a radical organization whose leaders include a socialist party founder, communists and a leader of the 1960s anti-American Weather Underground terrorist organization."

"Her husband, Robert Borosage, is a longtime progressive activist who co-founded the Apollo Alliance, far-left group that has been instrumental in helping draft key policies of the Obama administration."

Borosage was, for many years, a leader of the Marxist Institute for Policy Studies , and was prominently featured in S. Steven Powell's book Covert Cadre, about this organization. He was behind many of their most successful penetrations of the media and Congress, and he amassed a well-documented list of support for various communist/marxist causes (which will be listed at his KW page site).