ACORN was the largest organization of lower income and working families in the United States. At its height the organization had 400,000 members spread throughout more than 100 cities.

ACORN’s stated mission was to win "a bigger voice and fairer share for low and moderate income families". Through the "hard work of hundreds of community organizers and thousands of community leaders across the country, ACORN has won landmark victories in the areas of community reinvestment, fair lending, living wages, education reform, environmental justice, and other issues."[1]

ACORN announced March 22, 2010 that it is folding after revenue numbers fell.[2]

It was a Wade Rathke project, an extension of ACORN into countries other than the United States. On Rathke's Chief Organizer site, he said ACORN International is now known as Community Organizations International.[3]

The ACORN "family of organizations" includes radio stations KNON and KABF, publications, housing development and ownership (ACORN Housing) and a "variety of other supports for direct organizing and issue campaigns", such as Project Vote and the Living Wage Resource Center. ACORN Community Labor Organizing Center is also an affiliate of ACORN.

A list of ACORN's extended network provides the names of many organizations affiliated with ACORN.

A World Net Daily (WND) article of Sept. 26, 2011 (approximate date) entitled "Another $15 Billion Proposed for Alinsky-Inspired Groups" told about a new book by veteran researcher Matthew Vadum that exposes federal money the old ACORN organization is getting under new names. Vadum exposes these groups in his book "Subversion Inc.: How Obama's ACORN Red Shirts Are Still Terrorizing and Ripping Off American Taxpayers."

The many focus of this book is on "Affordable Housing Centers of America Inc.", (AHCOA), "which is the new name for ACORN HOUSING. This new incarnation has been heavily funded by "Obama's Department of Housing and Urban Development (HUD), with the "HUD Secretary and longtime ACORN ally Shaun Donovan...showering ACORDN with federal tax dollars."

Vadum provides dollar amounts of grants that total over at least one million dollars for just the few examples given (Affordable Housing Corp. of America which is registered to AHCOA; AHCOA offices in Miami and San Antonio, Texas, etc.

Vadum also wrote "When it was known as ACORN Housing, AHCOA was notorious for transferring funds to the most political branches of the ACORN network. From 2000 through 2007, ACORN Housing transferred more than $4 million to the American Institute for Social Justice, an ACORN affiliate that trained organizers in the brutal-in-your-face tactics preached by "Rules for Radicals" author [Saul Alinsky]]".

A final sentence said that "Although the ACORN network has taken in $79 million from the federal government over the years, AHCOA owes $162,813 in back taxes to the IRS, 11 states, one major city and two California counties.

In response to the devastation caused by Hurricane Katrina, the DSA Fund has established a special fund to accept tax-deductible donations from DSA members and friends. This fund will be used primarily to provide help to community-based and other social change organizations in the affected area recover from the storm and its aftermath...

The DSA Fund has already designated an initial beneficiary of this fund: ACORN (the Association of Community Organizations for Reform Now) saw its national headquarters in New Orleans destroyed. ACORN has a long history of defending the interest of the poor and working people of New Orleans. The group is attempting to re-establish its headquarters in Baton Rouge so that it will be able to continue to address the needs of the displaced population of the region. Other organizations will be added to the list as they are identified and approved by the Fund...

Rep. Danny Davis (D-Ill.) brought some 2,000 delegates attending the national convention of the Association of Community Organizations for Reform Now to their feet with a ringing call for “the people’s agenda.”

ACORN, founded in 1970, organizes low- and moderate-income people in communities across the country. The June 29-July 1 convention included large, lively delegations from Chicago, New York, California, Missouri and Minnesota, and smaller groups from a range of states, including Oregon, Texas, Arkansas, Louisiana, Maryland and Massachusetts. Participants were primarily African-American but also included Latinos and others.

Convention participants attended workshops and picketed the homes of officers and board members of Household International, the home mortgage company that is the principle target of ACORN’s national campaign aimed at “predatory” lenders who target low-income families that have difficulty arranging financing to buy or repair homes. Delegates also staged a demonstration in support of immigrant workers on the last day of the convention. (See story page 16.)

Capturing the spirited mood of the June 30 opening session, Maude Hurd, ACORN president, said that despite the Sept. 11 attacks, “we still have the same old fight.” Hurd cited victories won by ACORN during the past two years. Among these, in New Orleans ACORN and Service Employees International Union (SEIU) Local 100 worked to win a first-ever citywide minimum wage increase through a public ballot initiative. In Massachusetts and other states, ACORN waged successful campaigns for regulations against predatory lending. “We are going to fight on issues that affect our members and we are going to win,” Hurd said.

Other speakers talked of a need for a people’s movement to “save our country.” SEIU international Secretary-Treasurer Anna Burger said, “How do we save our country? Organize, radicalize, mobilize.” Burger lambasted corporate CEOs and their allies in the Bush administration for favoring the rich at the expense of the rest of the country. “How greedy can they get?” she asked, warning: “We have to do more before our Constitution, our democracy, even our way of life is taken away.”

In an appeal for an alliance of labor and community organizations to fight the people’s battles, Burger said, “We need your help, you need our help. Together we can take back our government, and our country.”

Rep. Jan Schakowsky (D-Ill.) charged that, for the Bush administration and the Republican leadership in Congress, “everybody comes before the people,” and said that with their drive to repeal the estate tax, Republicans are putting “rich dead people before poor people.” Congress should block tax cuts for the rich until everyone has an affordable place to live, she declared.

Assailing the Bush administration’s anti-immigrant policies, Schakowsky said, “Since Sept. 11, this administration has had a hard time distinguishing between terrorists and immigrants who come to this country only to make their lives better. They deserve a living wage along with everybody else.”

Later, delegates boarded buses to travel to the upscale communities where Household International officials live. Although police forced demonstrators away from the gated entrance to the property of Household CEO William F. Aldinger, Betty Coy said the effort was worthwhile.

“We accomplished two things,” she told the Communist Party USA's People's World. “We let the community know they had a ‘shark’ for a neighbor and we hope we built more support for our campaign against predatory lending.”

ACORN defines predatory lending as the practice of imposing unfair and abusive loan terms on borrowers by taking advantage of a borrower’s lack of understanding of extremely complicated transactions, and use of outright deception in getting people to sign. The damage is increased by the fact that predatory loans are made in such concentrated volume in poor and minority neighborhoods where better loans are not readily available.[6]

ACORN International has expanded rapidly in recent years, with operations in Canada, Peru, Mexico, Argentina, Dominican Republic, and India, as well and emerging projects in Kenya and Ecuador and partnerships in Indonesia, Korea, and the Philippines.

ACORN International’s "unique style of grassroots, membership based community organizing has found traction in places from squatter communities in Latin America all the way to the diverse cities of India, including Mumbai, New Delhi, and Bangalore. ACORN International also supports direct low wage worker organizing with among waste pickers in Delhi and hawkers in Mumbai".

Among many documents left behind in 2008 in an abandoned ACORN office was a five-year ACORN plan to "make Oklahoma a progressive state in the way it was 100 years ago." The office space was the former location of the Oklahoma City ACORN branch.[7]

Because ACORN is tax-exempt and non-profit, it is required by federal law to avoid partisan politics. However, the heart of the "Power Plan" shows the organization's goal to transform the red state to a blue one.

"Therefore, the route to power is twofold: First, build powerful city organizations in Oklahoma City and Tulsa that can control these municipalities. Second, become an influential organization by shaping a handful of strategic legislative districts that, by themselves, can change who controls the state legislature.
"(W)e will be seen as the force that is making Oklahoma a progressive state in the way that it was 100 years ago.
"By using this power to win significant changes for working people, by the end of our 5 years, we will have legitimized the progressive takeover of the statehouse and head into 2012 with a real possibility of changing what Oklahomans look for and expect out of their Congressional delegation."

Also found among the documents, according to OklahomaWatchdog.org, was a suggested script for approaching volunteers in Houston to help ACORN recruit voters to support President Obama during the 2008 presidential election:

"Those internal documents include a sheet titled 'Canvass recruitment' a script directed towards ACORN activists in Houston which says: 'Hi, my name is ____. We are hiring Outreach Workers to remind people to get out and vote for Barack Obama in the upcoming election. One of our team members spoke to you today and you signed up for our intake tomorrow. You are interested in working with us on this important election, correct?

"It continues: 'We're hiring for people to go door to door talking to registered voters in Houston to get out the vote for Barack.'"[7] 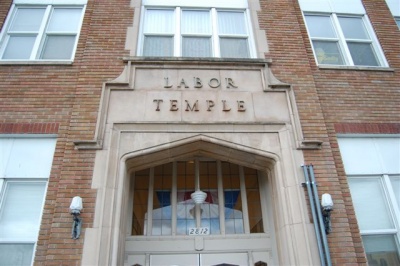 A journalist from the Evergreen Freedom Foundation discovered that the Everett, Washington chapter of ACORN is down the hall from State Representatives John McCoy and Hans Dunshee as well as the local Service Employees International Union office in a building with a sign labeling it the "Labor Temple."[8]

ACORN is a grant recipient of the Proteus Fund.[9]