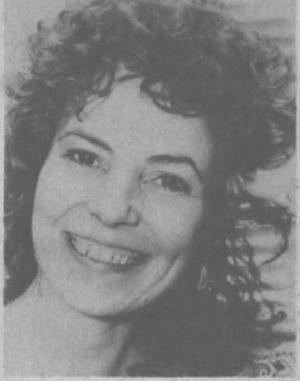 Anne Feeney is a Philadelphia activist and singer.

In 1990, Anne Feeney, was a singer and a member of Pennsylvania Democratic Socialists of America.[1]

By 1969 and freshman year at the University of Pittsburgh, Anne Feeney was an aspiring folksinger who took the stage at an antiwar teach-in to belt out "Draft-Dodger Rag." Bohemian years in New York led her back to Pittsburgh, a commune, and marriage to leftish lawyer Ron Berlin in 1977.

Feeney ultimately took a law degree herself, representing women in custody and support cases, but her abiding passion was music. From the breakup of her first band, Cucumber Rapids, in 1977, to her private 1986 recording to "The Great Peace March" tape, she divided her time between law, music and the care to two children: Daniel, and Amy.

Her career took a quantum jump when in three shortweeks she went from a St. Patrick's Day gig at the Poor House in industrial Carnegie to opening for Kristin Lems at the 1989 March for Women'8 Lives in Washington, D C.[2]

The fourth floor meeting room of the United Steelworkers national headquarters, in Pittsburgh, rang out with cheers, applause and music Nov. 19, 2012, as nearly 200 friends, family, neighbors, union brothers and sisters and comrades, gathered to pay tribute and celebrate the life of George Edwards.

Then after belting out the verses of "You ain't been doing nothin' if you ain't been called a Red," folk singer Annie Feeney launched into a rousing rendition of the Internationale, the working class and Communist hymn, bringing some members of the audience to their feet.[4] 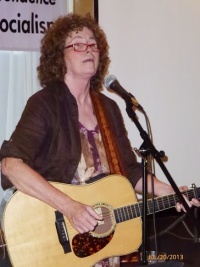 At the 2013 Committees of Correspondence for Democracy and Socialism convention, The workshop on Culture and Politics was chaired by Harry Targ, and featured film maker Anne Lewis, and blues and labor singers Ben Shannon and Anne Feeney as presenters.

“I’ve been ‘comforting the afflicted and afflicting the comfortable’ since I graduated from high school in 1968. The Vietnam War and the Civil Rights Movement shaped my conscience and consciousness. It has been my privilege to spend most of my waking hours with people who are trying to make a difference in this world.”[5]