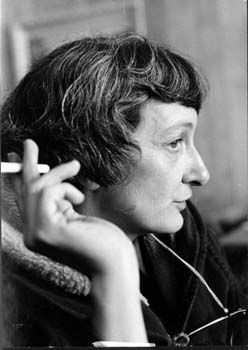 Anne Braden was born Anne McCarty on July 28, 1924, in Louisville, Kentucky, but spent most of her childhood in Anniston, Alabama, "raised by middle-class parents who were firm believers in racial hierarchy. A devout Episcopalian, she studied literature and journalism at a Virginia women's college, then worked as a newspaper reporter in postwar Alabama, where she was "repelled by its blatantly discriminatory justice system." Returning to the border city of her birth, she joined the staff of the Louisville Times in 1947."[1]

In 1954, a week before the Brown vs. Board of Education Supreme Court decision, Anne Braden and Carl Braden bought a house in an all-white neighborhood for a black couple, Andrew and Charlotte Wade, who were unable to purchase it due to racial restrictions in real estate. This act resulted in mob violence against the Wades and bombing of the house. Anne recounts: The Prosecuting Attorney said there were two theories. One was that the house was bombed by the neighbors to get rid of the Wades. The other was that this was all a communist plot to foment race hatred in order to overthrow the government of the state of Kentucky. Lewis Lubka, a member of the Wade Defense Committee, recalls being pulled before the Grand Jury and asked, out of the blue, "Were you ever or are you now a member of the Communist Party?"

Although Carl Braden answered “No” he was found guilty of sedition and served 8 months of a 15 year sentence.

From that point on the Bradens vowed never to give that question legitimacy by answering it.[3]

As of May 1964, Anne Braden, editor, Southern Patriot, was listed as a sponsor of the Communist Party USA front, National Committee to Abolish the House Un-American Activities Committee. 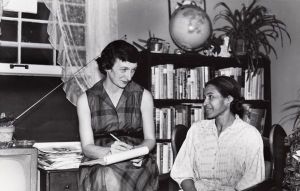 In the late 1960s Anne Braden was listed as a Sponsor of American Committee for Protection of Foreign Born[4].

On April 28, 1966 Anne Braden was a sponsor of the Herbert Aptheker Testimonial Dinner. The dinner was held on the occasion of Herbert Aptheker's 50th birthday, the publication of his 20th book, and the 2nd anniversary of the American Institute for Marxist Studies. It was held in the Sutton Ballroom, The New York Hilton, Avenue of the Americas, 53rd to 54th Street, New York City. Most speakers, organizers and sponsors were known members or supporters of the Communist Party USA.[5]

On February 8 and 9, 1975, the Second National Conference in Solidarity with Chile was held at Concordia Teachers College in the Chicago suburb of River Forest. Known Communist Party USA members sponsoring the event included Ann Braden [7]

April 16, 1975, Anne Braden, Southern Institute for Propaganda & Organizing , was on the Current List of Sponsors of the Communist Party USA front National Coalition to Fight Inflation and Unemployment.[8]

National Alliance Against Racist and Political Repression (NAARPR) was founded in 1973 in Chicago, Illinois. It grew out of the struggle to free Angela Davis from a "racist frame-up" on murder charges surrounding the aborted attempt by Jonathan Jackson to free his brother, George Jackson and the Soledad Brothers in 1970[9].

It was led by Communist Party USA members and supporters including Davis herself, Charlene Mitchell, Anne Braden and Frank Chapman.

In March 1979, the New York radical magazine the Guardian issued an emergency appeal to funds in an effort to save the publication.

Over fifty supporters endorsed the appeal including Anne Braden[10]

Anne Braden, attended the first national convention of the Communist Party USA front Women for Racial and Economic Equality, in 1977. [11] 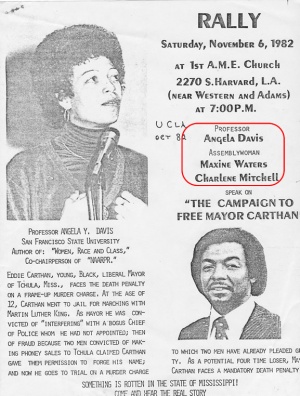 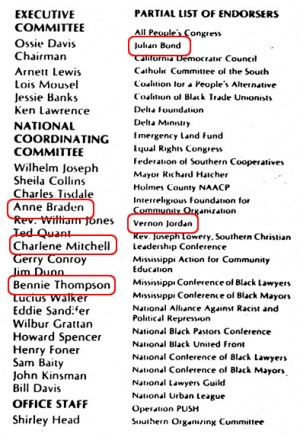 In 1982 Anne Braden served on the National Coordinating Committee of a Communist Party USA front the National Alliance Against Racist and Political Repression, which was led by leading Party members Angela Davis and Charlene Mitchell. 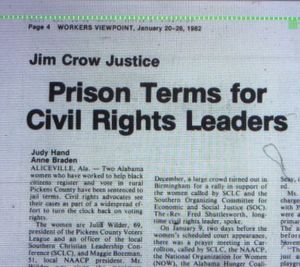 In These Times ad for a National Conference July 30-August 1, 1982 of the FFP

The Communist Workers Party front Federation For Progress put a half-page ad in the "socialist" oriented weekly newspaper, In These Times in the July 14-27, 1982 issue, p. 8, entitled: "A natural follow-up to June 12: A national conference July 30-August 1 at Columbia Un., in New York City".

It was a follow-up conference to the major "anti-defense lobby" march and protest in New York on June relating to the U.N. Second Special Session on Disarmament.

Conference on Socialism and Activism

The Maoist-oriented weekly newspaper, The Guardian of November 27, 1985, on Page 14, featured a half-page announcement about the upcoming Conference on Socialism and Activism to be held on December 6-8, 1985, at Teachers College, Columbia University in New York City. It was "sponsored" by The Guardian, The Nation Institute, The Progressive (magazine), and WBAI-FM (one of the Pacifica stations).

Anne Braden has been active in Democratic politics for many years. She was a delegate to the Democratic Nominating Convention in 1980 and an alternate delegate in 1984. At the same time, she has been a member of the Communist Party USA, another good example of the party utilizing "two legs of a stool." She was a Communist Party organizer and from 1970 onwards she was Executive Director of the Southern Conference Education Fund, an organization with several Communists in its leadership and dedicated to promoting racial integration "by revolutionary means."

She was placed on the November 1988 presidential ballot in Kentucky as an elector for the Communist Party USA ticket of Gus Hall.

She was also a member of the National Council of the National Emergency Civil Liberties Committee, cited as a Communist front by the House Un-American Activities Committee. This Council has included such identified Communists on its Board as Frank Wilkinson, Harvey O'Connor, Victor Rabinowitz, and Jonathan Lubell.

Frank Wilkinson was long associated with Ann Braden's husband, Carl Braden, and both were cited as Communists at the same time by the House UnAmerican Activities Committee. The NECLC has given legal assistance to many communists or communist causes including the Soviet agent, Judith Coplon, and the Castro government of Cuba.

Regarding her being a delegate to the 1984 Democratic Convention, Mrs. Braden stated that a Black delegate had been elected to vote for Jesse Jackson at the Convention but local Black politicians awarded it to her "to further the cause of coalition building." another example of the Democratic Party cooperating with Communists to further a coalition.[13]

At the 1987 National Rainbow convention in Raleigh North Carolina, a new board was elected, which included Anne Braden.

Anne Braden, who’d organized Rainbow rallies in Appalachia that drew thousands of poor white nonvoters or registered Republicans, called “appealing to the best instincts of Southern whites as opposed to the worst, which is what Bill Clinton played to.”[14] 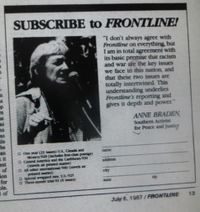 In the mid 1990s Anne Braden was[15]a contributing editor to Oakland based Institute for Social and Economic Studies- sponsor of CrossRoads magazine, which sought to promote dialogue and building new alliances among progressives and leftists... and to bring diverse Marxist and socialist traditions to bear while exploring new strategies and directions for the progressive political movements.

In 1992 Anne Braden, Louisville, Kentucky, endorsed the Committees of Correspondence national conference Conference on Perspectives for Democracy and Socialism in the 90s held at Berkeley California July 17-19.[16]

In 2002 Anne Braden was listed[17]on the Advisory Board of Committees of Correspondence for Democracy and Socialism. 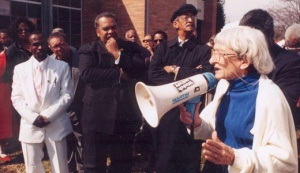 As at Winter, 2008, the following served on the Advisory Board of the Maurice & Jane Sugar Law Center:

Braden was listed as a Vice-Chairperson of the Committee of the National Committee Against Repressive Legislation, circa 1965.[18] NCARL has now merged into Defending Dissent.