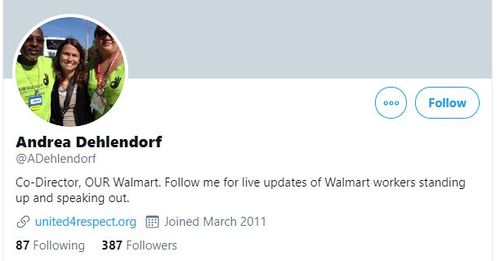 Template:TOCnestleft Andrea Dehlendorf is Co-Executive Director, Organization United for Respect at Walmart, also referred to as "OurWalmart" and also "Our".

Organization United for Respect at Walmart Co-Director, Member of the OUR Fund Advisory Board at the New World Foundation

Andrea has over 20 years of experience as a labor advocate and organizer working with people working in low-wage jobs and building a progressive labor movement. Prior to her work with OUR, was the Assistant Director of the Making Change at Walmart campaign at the United Food and Commercial Workers International Union, where she led the development of Organization United for Respect at Walmart.

Previously, Andrea worked as the Acting Director of SEIU’s Property Service Division, and served as the Executive Vice President and Organizing Director of SEIU United Services Workers West, an organization of property services worker in California that has secured health care and living wages 40,000 janitors, security officers, higher education and airport workers. For 11 years, Andrea led organizing for Justice for Janitors and Airport Workers United campaigns in California, which brought over 10,000 new members into the organization and raised the standard of living for 50,000.

The Forge Editorial Advisory Board comprises leading organizers and strategists who offer key leadership and guidance to the endeavor.

Andrea Dehlendorf was involved in the Progressive Strategy Summit named "Building Power for the Rest of Us" held on October 24-25 2019 at the Hyatt Regency Washington on Capitol Hill. Andrea Dehlendorf was listed as one of those "featured" in a panel headlined "From the Shop Floor to the House Floor: Bringing; Lessons from the Picket Lines into Policy Debates" which aimed to "discuss our shared goals of rebalancing our economy to achieve racial, gender, and economic justice."[3]

"A hallmark of the progressive movement is a belief that the experiences and needs of working people should animate our policy and politics. This session will bring together organizers, policy makers, labor leaders, advocates, and activists to discuss our shared goals of rebalancing our economy to achieve racial, gender, and economic justice. Bank workers from Santander and Wells Fargo, women working at Walmart, warehouse workers at Amazon, federal contract workers, and striking UAW workers will describe their campaign goals. Special guest members of Congress and national policy leaders will have the opportunity to describe the change they're fighting for in Washington and recent progress building worker power through legislative campaigns. Some of the questions that may be addressed include: How do we achieve better alignment between policy in Washington and people organizing on the front lines? What are the gaps in existing legislation that need to be filled to support working people in a rapidly changing economy? What are the steps we need to take to rein in corporate power, beyond traditional labor legislation? How does the legislation currently on offer build worker power and achieve racial, economic and gender justice?

Working for Respect: Community and Conflict at Walmart

The 2018 book by Adam Reich and Peter Bearman titled Working for Respect: Community and Conflict at Walmart, the authors "matched student activists with a nascent association of current and former Walmart associates: the Organization United for Respect at Walmart (OUR Walmart)" and from the summary provided by Columbia University Press: "They [the authors] follow the efforts of this new partnership, considering the formation of collective identity and the relationship between social ties and social change. They show why traditional unions have been unable to organize service-sector workers in places like Walmart and offer provocative suggestions for new strategies and directions."[4]

Andrea Dehlendorf, Co-Executive Director, Organization United for Respect at Walmart was a 2017 Rockwood Leadership Institute National Leading From the Inside Out Alum.[6]

National Survey of the Retail Workforce

Andrea Dehlendorf was cited in the 2017 "report" titled "Job Quality and Economic Opportunity in Retail: Key Findings from a National Survey of the Retail Workforce" conducted by the Center for Popular Democracy:[7]

This report was researched and written by Maggie Corser. It was edited by Rachel Deutsch, Carrie Gleason, and Lily Wang, Fair Workweek Initiative at the Center for Popular Democracy. This survey benefited from the input of an advisory group which included: Andrea Dehlendorf and Tyfani Faulkner, United for Respect; Dr. Anna Haley-Lock, Rutgers University; Dr. Arne Kalleberg, University of North Carolina at Chapel Hill; and Dr. Susan Lambert, University of Chicago. We would like to thank the W.K. Kellogg Foundation for supporting this research.