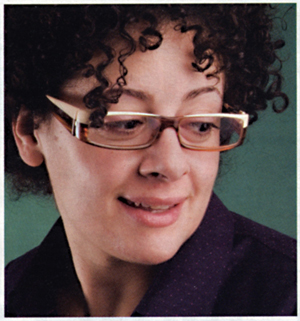 Andrea Batista Schlesinger is a New York based activist.

The daughter of a Dominican immigrant Isabel Batista and a Brooklyn native Robert Schlesinger, Andrea Batista Schlesinger grew up in Brooklyn and now lives in Astoria, Queens.

Andrea Batista Schlesinger studied public policy at the University of Chicago. Before DMI, Andrea directed a national campaign to engage college students in the discussion on the future of Social Security for the Pew Charitable Trusts and served as the education advisor to Bronx Borough President Fernando Ferrer.

She has been profiled in publications including the New York Times, New Yorker magazine, Latina Magazine and in 'Hear us Now,' an award-winning documentary about her tenure as the student member of the New York City Board of Education. In media outlets from NPR to The Huffington Post, Andrea is turned to for her forward-thinking analysis on America's greatest challenges.

She was named a '40 under 40 Rising Star' by Crain's New York Business in 2007, a “Next Generation of Political Leaders in New York' by City Hall Newspaper, and received a LatinaPAC Dolores Huerta Award for 'making great strides in promoting progress in our community.'

She serves on the Editorial Board of The Nation and the boards of the Sadie Nash Leadership Project, WireTap and the[1]Applied Research Center.

Since 2002, Andrea Batista Schlesinger has applied her background in public policy, politics and communications to lead the effort to turn the Drum Major Institute, originally founded by an adviser to Rev. Dr. Martin Luther King, Jr. during the civil rights movement, into a progressive policy institute with national impact.

During her tenure as Executive Director, DMI has released several important policy papers to national audiences; produced the only progressive analysis of the immigration debate addressing the concerns of the squeezed middle-class; created its Marketplace of Ideas series, which highlights successful progressive policies from across the country; launched two policy blogs that reach several thousand readers each day; and, launched a national program to connect college students from under-represented communities to careers in policy. Andrea has doubled DMI's staff, capacity and budget, making it a leading source for progressive ideas.

In 2008 Andrea Batista Schlesinger, Drum Major Institute served on the advisory board of Center for Working Families.[3]

On March 17, 2008, at the Take Back America conference in Washington D.C. Larry Cohen, Roger Hickey, Robert Kuttner and Andrea Batista Schlesinger spoke in a session entitled "Out of the Hole: An Economy that Works for Working People".[4]

Andrea Batista Schlesinger was one of the 148 speakers who spoke at the 2010 America's Future Now Conference.[6]

In 2014, at Chelsea Piers, North Star Fund held its annual Community Gala. This 35th Anniversary Community Gala was a spectacular celebration of North Star Fund and the achievements of our diverse community of philanthropic and grassroots activists and organizers. The event raised $870,000, which broke every previous record.