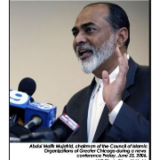 Abdul Malik Mujahid is a leader of the Council on American-Islamic Relations - Chicago.

According to an April 2012 press release from Lauren Love, Rainbow/PUSH Coalition, and Eric Ruder, Coalition Against NATO/G8, the Rev. Jesse Jackson and other community and labor leaders will gather on Thursday, April 19, at 11:15 am on the 2nd floor of City Hall to announce their plans to march in opposition to NATO. The march will take place on Sunday, May 20, which is the first day of the NATO summit, and is being organized by the Coalition Against NATO/G8 War and Poverty Agenda (CANG8).

Rev. Jackson will also announce his plans to speak at CANG8’s People’s Summit at Occupy Chicago’s headquarters on May 12–13, the weekend before the NATO summit.

Standing with Rev. Jackson to announce their support for the march and People’s Summit will be Occupy Chicago; the Chicago Teachers Union; the National Nurses United; and members of the Service Employees International Union.

“Our world has become jilted by war and weapons,” said Rev. Jackson. “There is simply too much violence, too much concentrated wealth and too much poverty. I hope on May 20 there will be a large demonstration with global participation. It’s time we go in a different direction. I am urging us to shift our priorities. This demonstration is designed to appeal to the leaders of the world to choose to depend less on military intervention and more on negotiations to try to heal these societies ravished by poverty and internal strife.”

CANG8 organizers are pleased to be joined in their efforts by many other community and labor leaders in addition to Rev. Jackson. “ “This march will take place at a crucial moment in NATO’s war on Afghanistan as a majority of Americans have now turned against further U.S. involvement there,” said Joe Iosbaker, a CANG8 organizer.

“Occupy Chicago is proud to support the May 20 march being organized by the Coalition Against NATO/G8,” said Rachael Perrotta, a member of Occupy Chicago’s press team.

Many nurses from the Chicago area and beyond have been active in the Occupy movement and in challenging budgets that prioritize war spending over public health. “As an ER nurse, I see the suffering of the 99 percent firsthand,” said Dennis Kosuth, a registered nurse at Stroger Cook County Hospital. “The global 1 percent and the G8 are calling for austerity cuts to vital social services while draining trillions of our tax dollars into the NATO war machine. Our tax dollars should be going into our public schools, healthcare services, libraries, public transportation—back to the people of Main Street. Registered Nurses of the National Nurses United will be marching alongside CANG8 this May to protest NATO and to call for a Robin Hood Tax on the G8 global 1 percent.”

Christine Boardman is the president of Service Employees International Union Local 73, which represents 25,000 public employees in Illinois and Indiana, and she is urging union members and working people to attend the protest in large numbers. “G8 policies have supported so-called ‘free trade agreements,’ which have caused the loss of millions of jobs,” said Boardman. “Instead of funding for war and supporting ‘free trade’ for corporations, which means ‘slave trade’ for workers, it must become our national priority to keep good jobs here and to fund services for our communities.”

In addition to specifying Jesse Jackson, , speakers will now include, along with those announced earlier: Leah Bolger, head of Veterans for Peace, who was recently tried for “disrupting” the so-called SuperCommittee in Congress; Carlos Montes, who was targeted by an FBI raid in Los Angeles; Kari Fulton, of the Environmental Justice movement; and Larry Holmes, of International Action Center.[1]