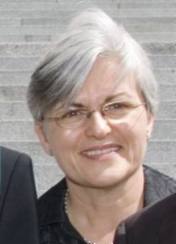 In the 1980's, Street spent three years as the Auckland chairperson of the Post Primary Teachers Association. She was a regular delegate to the PPTA Annual meetings.[2]

In 1984, Street was a member of the Election Strategy Committee of the PPTA.[4]

In February 1984, it was reported in Socialist Action, the newspaper of the Trotskyist Socialist Action League, that Street, as PPTA Auckland chairman, criticised Auckland Grammer School head John Graham, who said Maori students had themselves to blame for low exam marks.[5]

In 1985, Street was a member of the Council of Trade Unions Task Force in the PPTA.[6]

At the end of 1984, Street was appointed as the Combined State Unions representative to the Trade Union Education Task Force set up by the Ministers of Labour and Education.[8]

From 1985-87, Street was a member of the Task Force on Trade Union Education.

At this point, she was still a member of the PPTA.

In the mid ’80s, Mike Law was working at Centre for Continuing Education, at the University of Waikato. Shortly after Labour’s 1984 election victory, he was appointed chairman of of a four person Task Force on Trade Union Education. His three colleagues were;

This Taskforce led to the establishment of the Trade Union Education Authority. Until it was abolished by the Bolger Government, TUEA served as a taxpayer funded propaganda vehicle for the SUP. Known Party supporters who were paid or subsidised by TUEA include; Graeme Whimp, Hazel Armstrong, Ros Goldsbrough, Brendan Tuohy, Joe Tepania, Gary Reading, Sam Murray and Marilyn Kohlhase.

Workers Communist League supporters on the payroll or in receipt of TUEA subsidies include; Graeme Clarke, David Steele and Therese O'Connell.

In 1984, Street was the Auckland convener of the Combined State Unions; the regional chairwoman of the PPTA and an English teacher at Green Bay High School.

A variety of left-wing interests

In the 1980's, Street found time to take part in the Association for Drama in Education; the Workers Education Association; the Working Women's Resource Centre; politics and Auckland Feminist Teachers. It was the AFT to which she was most committed - from its inception in fact - in late 1979.[9]

Street on management committee of AWWR

In 1990, Street was on the management committee of both the Auckland AWWR and the Clerical Worker's Union.

In the December 5, 1988 issue the People's Voice, the newspaper of the Stalinist Communist Party of New Zealand, it was reported that on October 21, 1988, Street addressed a 12,000-strong crowd of Auckland workers at a union meeting which was held at Mt. Smart Stadium.[10]

From 1988-90, Street was Vice-President of the Auckland CTU.

In 1984, Street attended the Economic Summit Conference in Wellington.[11]

In November 1984, Street chaired the Auckland Women's Forum. In an article in the Soviet aligned Socialist Unity Party newspaper, the Tribune, dated November 26, 1984, Street commented that "Left-wing women, who were many and varied, forgot a lot of their differences. We suddenly realised that it was a case of 'link arms' and that, in a sense, the luxury of bickering among ourselves and having lesbian/heterosexual splits, Labour Party/SUP splits, Broadsheet/Snapdragon splits could no longer be afforded. . . it was encouraging to see the way left-wing women rallied to support each other at the Forum."[12]

An article appeared in the November 26 1984 issue of the pro-Soviet SUP's newspaper, the Tribune, in which Street was interviewed by Jan Farr. Street identified herself as a left wing feminist. Farr noted that "Maryan's involvement in the womens movement grew out of her trade union work, through her own union, the PPTA, of which she is regional chairperson, and because of groups like Feminist Teachers set up to support women in education. She identifies the womens movement as the kind of feminism that grew out of the women's liberation movement in the '60s and '70s." She said: "There are very clear areas of unity among feminist women - one is the UN Convention, another is pornography, another sexual harassment; and I think it is possible for feminist women to work, particularly through their unions, on each of these issues. Trade union education is an area where women workers can begin to claim some of their rights. Trade union education courses should be set up solely for women in order to redress some of the imbalances and equip women to be more effective trade union members."[13]

In the November 28 1988 issue of the Tribune, Street had contributed an article on the U.S. elections, which she had attended.[14] 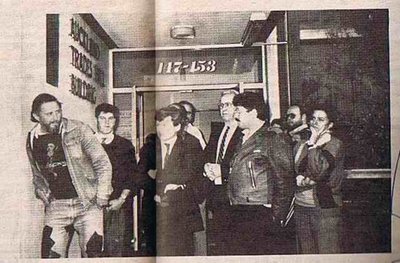 In 1989, the People's Voice, the newspaper of the Communist Party of New Zealand, an article was featured in which it was noted that Street was a Health Effectiveness Studies Coordinator, working alongside Socialist Unity Party member Simon Wallace. As part of this article, there was a photograph of her in the company of SUP members.[15]

Street has been extensively involved with the Labour Party for at least the mid-1980's.

In 1985, Street was elected onto the Labour Party Policy Council. She was described in the September 2 issue of the Tribune as one of the "strong anti-nuclear campaigners." Others, who also happened to be of an equally left-wing bent who were voted onto the council included; Rob Campbell, Jim Anderton, Rex Jones and Helen Clark.

From 1986-89, Street was a Labour Party executive member in Auckland.

In 1990, Street was the Senior Vice-President of the New Zealand Labour Party.

At this time, she was also a university lecturer in Auckland.

In July, 1992, it was reported that Street had chaired the selection meeting for the Lyttelton electorate with Ruth Dyson, who won. At this time, Street was still the party's Senior Vice-President.[16]

In 1993, Street was elected as the Labour Party President. At this point, she also admitted to being a lesbian.

By 1996, Street had remained the Party President.

In 2003, Street had become the Co-Chair of the Rainbow Labour Party's Auckland branch. This was cmpletely dominated by gays.

In 1995, a publication on Maori Sovereignty was released to which Street contributed, entitled "Maori Sovereignty: The Pakeha Perspective." The preamble began as follows: "The issue of Maori sovereignty is discussed by prominent Pakeha from a variety of fields. Contributors include

Street appointed to new board

In 2001, Maryan Street, along with John Hill, both previously board members of the Housing Corporation and Community Housing, had also been appointed to the new organisation's board. Ms Street, who was by now a previous director of Auckland University's Centre for Labour Studies, was, at this stage an employee relations manager with Waitemata Health.

In 2003, Street was on the board of the Crown Forest Rental Trust. She had been a Trustee of this since August 2000.

In 2003, Street was Employment Relations Manager for the Waitemata District Health Board in Auckland. She was also employed by the District health Board of New Zealand on a half-time basis, to provide an industrial relations resource for all the district health boards in New Zealand. This position was to become a fulltime position in mid-September 2003. 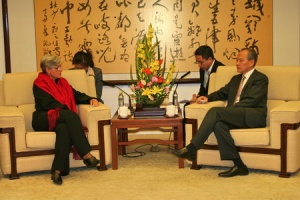 At the invitation of the International Department of the CPC Central Committee, the New Zealand Labour Party delegation led by Hon. Maryan Street MP, Spokesperson for Foreign Affairs, visited China from February 26th to March 5th, 2011. [18]

On March 3, 2011, Chinese Vice Foreign Minister Cui Tiankai met with Maryan Street, New Zealand Labour Party's Spokesperson for Foreign Affairs, Trade and Overseas Development Assistance, who is visiting China at the invitation of the International Department of the Communist Party of China (CPC) Central Committee. Both sides exchanged views on China-New Zealand relations and other issues. [19]