Template:TOCnestleft Mark Loo grew up in Manhattan, New York, the son of poor Chinese immigrants. He earned a full scholarship to a private high school where he was the only minority student.

One of Mark’s first recollection of racism occurred when a teacher singled him out for harassment. Sympathetic classmates pulled him aside and explained, “Don’t worry. He’s an ex-Green Beret. He thinks he’s still in Vietnam.”

In 1968 Loo entered Amherst College on one of the school’s first minority admissions programs. In spite of the fact he was one of only six Asian students in the whole school, with the advice of some Asian professors from the University of Massachusetts, he helped organize the first Asian American studies course. He and his friends began to grapple with their identity as Asian Americans. One of the biggest influences on Mark’s life was the upsurge in the antiwar movement that was sweeping the country. In his freshman year Mark organized students to petition to cancel exams and to hold a teach-in against the war instead. Looking back on this era, his wife Sara observed, “Vietnam had particular impact on us. It was a shocking example of imperialism where Asians were being targeted.”

When Loograduated in 1973 he made an important decision. “I was disillusioned by some of the things I saw in college. A lot of students just sat around talking about how they were going to make their first $100,000, and I knew that, whatever I did with my education, I wanted to help the community I came from.”

He responded to an ad placed by the Asian American Studies Center at UCLA and moved to the West Coast. At UCLA he worked at editing publications and met many other young Asians equally concerned with the problems of the community. Increasingly he found himself drawn to Chinatown and devoted countless hours to working with youth at the Chinatown Teenpost and organizing a food co-op.

During that time he met Sara Chung, a UCLA graduate who was a well-known activist in Chinatown. Her involvement included everything from founding the first childcare center, to sitting on the advisory board for the Asian Women’s Center, to publishing the Chinese Awareness newspaper.

For the next few years, Mark and Sara worked side by side in the community trying to tackle the problems and the oppression of immigrant Chinese. They found that, as the years went by and the economy sickened, one by one the programs they’d fought to establish became endangered. They witnessed federally-funded programs such as the Asian Women’s Center and Resthaven, the only mental health hospital located in Chinatown, close for lack of funding. Both began seeking explanations and comprehensive solutions for the worsening exploitation of their people.

“What I realized,” recalled Loo, “was that you could have a thousand and one agencies to deal with the problems, but they wound up being band-aids. If you really cared about your community you had to fight for fundamental changes in the structure of society. You had to fight for economic power.

“I began reading and comparing various radical newspapers to decide what organization was really fighting for revolutionary change. That’s how I found Workers Viewpoint.”

One of the other factors which influenced Mark and Sara was the growing prestige of socialist China. In 1974, Sara Tung toured China with a delegation of Asian American activists. She recalled, “What I learned from touring China, and seeing socialism in practice, was that socialism is not a Utopia. There are many difficulties. But it was vastly superior to anything else I’d seen.”

In 1975 Mark Loo got a job in the construction industry, building senior citizen housing in Little Tokyo. It was his first taste of manual labor with all its trappings – low wages, speed-ups, and ineffective unions. Less than a year later he was laid off, but through affirmative action, became a pipefitter apprentice. He was confronted by deep racism in the union. “Minorities were either left sitting around the union hall or given the worst jobs. Our representation was so bad that finally the business agent got caught twice stealing our union dues.”

Loo got a job as a pipefitter at the Goodyear Tire Plant in the heart of Watts and became active in the union. “Goodyear announced they were going to close the plant down because it was unprofitable. Instead, they were opening a new plant in South Africa to take advantage of the low wages. You had guys with ten to fifteen years on the job left out in the cold.” Mark helped organize the rank and file within the union and they were successful in preventing the plant from closing down completely. But Mark was among those laid off.

In 1978, Mark and Sara married and moved to San Diego where he got a job as a pipefitter at NASSCO. According to Business Week, NASSCO is the most profitable shipyard in the nation, netting over $25 million last year. Yet it pays the lowest wages on the West Coast, nearly three dollars less an hour than the other shipyards. It relies heavily on government contracts, particularly from the Navy.

Mark learned quickly about the health and safety conditions at the yards. “Less than two weeks after I began working I was working underneath a ship in an area where you have to get down and crawl between the pipes. Suddenly heavy smoke began billowing through an exit and I was almost overcome before I could crawl out. Apparently, the foreman had ordered some other workers to burn the grease off the skids without checking first to see if anyone was underneath. I learned that this was a typical example of NASSCO’s safety procedures.”

A year later Mark was elected shop steward for the Machinists Union and led the fight against what he termed “NASSCO’s plantation mentality.”

“One time my partner and I were asked to work in an elevator shaft which had no overhead protection. We decided it wasn’t safe so I left to look for another job. He went into the shaft just to retrieve his tools and at that precise split second, a heavy wooden crate fell three stories and hit him. Even after that they tried to get us to return to work there.

“Another time a racist foreman singled out this black guy and fired him for drinking a Coke on the job. Everyone drinks sodas on the ships because it gets to be 140°.

“They treat non-English speaking workers just about the worst. They used to even sell jobs to undocumented workers from Mexico.”

In August, 1980 one of the other active shop stewards was singled out and fired for insubordination. Loo remembered, “He was on a routine safety inspection and a foreman started giving him a hard time. When he talked back, they suspended him. It was so obviously unjust that we knew that we had to do something fast. So we organized about 200 workers to go down to the ship-launching ceremony of the Cape Cod. This was the same ship where David Boyd and myself led a work stoppage because of poor ventilation. We held a peaceful demonstration to explain to all the people there what kind of conditions we work under.”

The following Monday 17 workers, including Mark were fired for participating in the demonstration. “They singled out the union militants. At least ten of those fired were union officials and some of them hadn’t even been there at the ship-launching. It was a clear case of union-busting.”

The next day, all 6,000 workers at NASSCO wildcatted to protest the firings and refused to return to work for three days. A wave of arrests and firings took place.

“During the strike I met this guy named Ramon Barton. He seemed to be an active union member and was angry about the firings. He was always suggesting ways of getting back at NASSCO by hurting property or personnel, but I thought he was just caught up in the intensity of the strike.”

As it turned out, Barton was a paid FBI informant who had his body wired with microphones to record conversations among the union activists. Tapes of these conversations were the principal evidence used to indict the NASSCO 3 for conspiracy to bomb.

“A former labor relations official from NASSCO also revealed that he had been compiling dossiers on me and the others since November, 1979. They had more than 400 pictures of us and submitted them to various law enforcement agencies.”

Surveillance was nothing new to Sara Chung. She recalled that years earlier the Chinese Awareness newspaper staff had been infiltrated by a government agent trying to collect information on Chinese activists.

A month after the strike, on September 2 there was a gruesome turn of events. Two workers, Michael Beebe and Kenneth King, suffocated to death on the same deck where Loo and Boyd had led the work stoppage over ventilation.

“We were appalled by the way NASSCO tried to deny any responsibility in Beebe and King’s deaths. We felt we had to do something. Barton immediately approached David Boyd and Rodney Johnson and suggested that they cut off NASSCO’s power. Four days later he approached me. That was September 4.”

For the next few days, the four met to discuss the plan and even tested an explosive device in the desert.

“On September 10, I met with Johnson and Boyd and we decided that it was all a big mistake. We met with Barton on the 12th to call off the plan.” When the tapes were played in the courtroom, this portion was mysteriously missing. A professor from the University of California at San Diego testified that the crucial section of the tape had been tampered with.

“When Barton realized we wouldn’t go along with his plan, he agreed to drive out to the desert with Johnson and Boyd on the following Tuesday to dispose of the equipment. As far as I was concerned, the whole business was over.”

“At 8:00 a.m. on Tuesday my doorbell rang and I looked though the keyhole, but no one was there. When I opened the door, this guy jumped out and swung the door open and tackled me. It later turned out that he was a plainclothes agent from the San Diego red squad. My wife was feeding the baby in the next room and heard the commotion. When she came in the room I was handcuffed on the floor and two FBI agents rushed in and took me away with no explanation.”

Later, Loo learned that Barton’s van had been intercepted en route to the desert an hour earlier. Barton pulled over to the side of the road as FBI agents converged on the van and arrested Boyd and Johnson.

Immediately, the press in San Diego picked up the story and the NASSCO 3 became the talk of the town. When asked what has been the reaction to the arrests, Loo said, “Despite the FBI’s attempt to paint us as terrorists, support has rolled in from all corners. Former Attorney General Ramsey Clark recently hosted a fundraiser for the NASSCO 3 and Congressman Ron Dellums has called for a congressional investigation into illegal government spying at NASSCO.”[1] 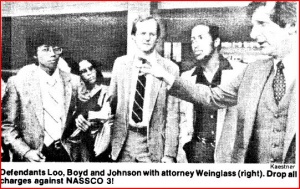 In 1981 Mark Loo, a Chinese-American member of the Communist Workers Party[2] , his party comrade Rodney Johnson, and unionist David Boyd were charged with the attempted bombing of the National Shipbuilding Company in San Diego, California. The trio were represented by lawyer Leonard Weinglass.

Defending the NASSCO 3, soon became a major cause for the Communist Workers Party.[3] 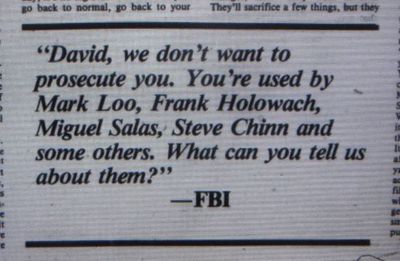