Jodie Evans is a member[1]of the Board of Trustees of the Institute for Policy Studies, she has worked on behalf of community, social-justice, environmental, and political causes for more than thirty years. She co-founded CODEPINK and co-authored Stop the Next War Now.

She worked on the campaigns of California Governor Jerry Brown and served as his director of administration. Between 1985 and 1990, was a board member of the Women’s Campaign Fund and Women’s Political Committee. She ran Jerry Brown’s campaign for president in 1991. She serves on the boards of a dozen nonprofits including Rainforest Action Network, Dads and Daughters, Drug Policy Alliance, Bioneers, 826 LA, and the Circle of Life Foundation. 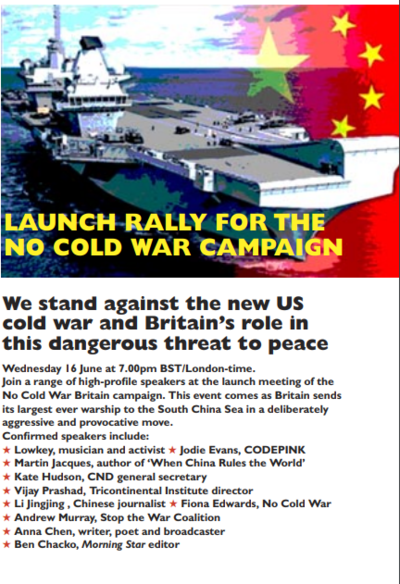 TEACH IN: US AGGRESSION ON CHINA: WHAT CAN WE DO 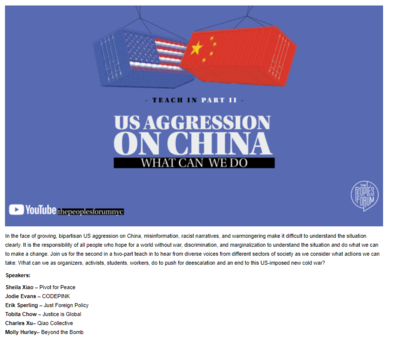 December 6 @ 2020 4:00 pm - 5:30 pm. . In the face of growing, bipartisan US aggression on China, misinformation, racist narratives, and warmongering make it difficult to understand the situation clearly. It is the responsibility of all people who hope for a world without war, discrimination, and marginalization to understand the situation and do what we can to make a change. Join us for the second in a two-part teach in to hear from diverse voices from different sectors of society as we consider what actions we can take: What can we as organizers, activists, students, workers, do to push for deescalation and an end to this US-imposed new cold war? 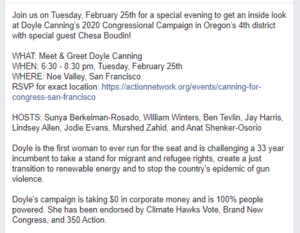 Join us on Tuesday, February 25th 2020 for a special evening to get an inside look at Doyle Canning’s 2020 Congressional Campaign in Oregon’s 4th district with special guest Chesa Boudin!

Jodie Evans, Code Pink, was a 2003 Rockwood Leadership Institute National Leading From the Inside Out Alum.[2]

Jodie Evans was one of 100 "prominent Americans" who signed an October 26 2004 statement[3]circulated by 911Truth.org calling on the U.S. Government to investigate 9/11 as a possible "inside job". 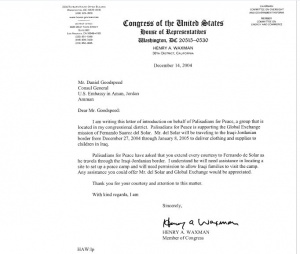 In December 2004, US Senators Barbara Boxer of California, Raul Grijalva of Arizona and Congressmen Dennis Kucinich of Ohio and Henry Waxman of California provided diplomatic courtesy letters to a contingent of anti-war groups and individuals desiring to Fallujah, Iraq. Among those travelling in the contingent were: Rosa Suarez del Solar and her husband Fernando Suarez del Solar; Jeffrey Ritterman, Physicians for Social Responsibility; Jodie Evans, co-founder of CodePink: Women for Peace; Medea Benjamin, co-founder of Global Exchange and CodePink; Hany Khalil, national organizer, United for Peace and Justice. The organizations sponsoring the tour were CodePink, Project Guerrero Azteca for peace, Global Exchange, the Middle East Children's Alliance, Physicians for Social Responsibility, Peace Action, United for Peace and Justice, and Voices in the Wilderness.[4]

Fernando Suarez del Solar stated that had it not been for the help of the two congressmen, the tour would have not seen the light due to obstacles laid by the Pentagon. The contingent traveled from December 27, 2004 through January 8, 2005.

The contingent delivered $100,000 in cash and and $500,000 in humanitarian aid. At the time the diplomatic courtesy letters were issued, Medea Benjamin had stated that the aid was intended for families of the “other side” in Fallujah.[5]

In 2006 Jodie Evans of CODEPINK was a National & State and a Peace & Social Justice Community endorser of Marcy Winograd of the Los Angeles Progressive Democrats of America in her unsuccessful primary bid for the Democratic Party nomination 26th Congressional District in California.[6] 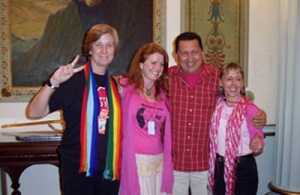 The fundraiser was at the Stanley & Betty Sheinbaum residence in Brentwood. Both Sheinbaums have been members of Democratic Socialists of America.[7]

In 2008 Jodie Evans of CODEPINK:Women for Peace, Venice, CA signed an online petition “A Open Letter to Barack Obama on Iran”.

"Your Son Deserved to Die"

In 2008, Evans took part in a CODEPINK barricade of the recruiting office in Berkeley, California. Debbie Lee, mother of Marc Alan Lee who was killed in action in August, 2006, was present on the scene, with her group Move America Forward. Debbie Lee states that Evans and fellow CODEPINK members taunted her, making light of her son's sacrifice and telling her:[8]

"Your son deserved to die in Iraq if he was stupid enough to go over there."

Campaign for Peace and Democracy

Jodie Evans serves on the Advisory Board of Progressive Democrats of America.[10]

Individuals and organizations supporting The 99% Spring, as of April 20, 2012, included Jodie Evans - CODEPINK.[13]

Lisa Natividad One of my fondest memories of being in the DPRK!!!!!

Ann Wright What great memories from our May 2015 trip to North Korea!! I hope we can go again--although the Trump administration is denying our requests for the Special Validation Passports they now require!

In 2016 Jodie Evans of CODEPINK, was a leader of People for Bernie.