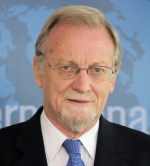 Template:TOCnestleft Gareth Evans is President Emeritus of the International Crisis Group, which he served as President and CEO from January 2000 to June 2009. He previously spent 21 years in Australian politics, thirteen of them as a Cabinet Minister. As Foreign Minister (1988-96) he was best known internationally for his role in developing the UN peace plan for Cambodia, helping conclude the Chemical Weapons Convention, and helping initiate new Asia Pacific regional economic and security architecture. He has written or edited nine books - most recently The Responsibility to Protect: Ending Mass Atrocity Crimes Once and for All, published in September 2008 - and has published over 100 journal articles and chapters on foreign relations, human rights and legal and constitutional reform.

He was Co-Chair of the International Commission on Intervention and State Sovereignty (2001), and a member of the UN Secretary General's High Level Panel on Threats, Challenges and Change (2004), the Blix Commission on Weapons of Mass Destruction (2006), the Zedillo Commission of Eminent Persons on The Role of the IAEA to 2020 and Beyond (2008) and the UN Secretary-General's Advisory Committee on Genocide Prevention. He is Co-Chair of the International Advisory Board of the Global Centre for the Responsibility to Protect.

In June 2008, he was appointed to co-chair (with former Japanese Foreign Minister Yoriko Kawaguchi) the International Commission on Nuclear Non-Proliferation and Disarmament, and now works from Australia as a Professorial Fellow at the University of Melbourne.[1]

Progressives from all over the world are getting together in Brussels on April 2-3, 2009 at the Global Progressive Forum to discuss how to create a better globalization for people[2]

"While sovereign Governments have the primary responsibility to protect their own citizens from such catastrophes, when they are unable or unwilling to do so that responsibility should be taken up by the wider international community ” with it spanning a continuum involving prevention, response to violence, if necessary, and rebuilding shattered societies."