In 1967, Allard Lowenstein convinced Senator Eugene McCarthy to challenge Lyndon Johnson in the Democratic primaries. McCarthy demonstrated that anti-war politics could be winning politics and brought along Robert Kennedy, not to mention hundreds of thousands of new political activists.[1]

On July 28, 1970, the F.B.I. issued a top secret memo entitled CONTACTS BETWEEN REPRESENTATIVES OF THE SOVIET, UNION AN MEMBERS OR STAFF PERSONNEL OF THE UNITED STATES CONGRESS INTERNAL SECURITY - RUSSIA 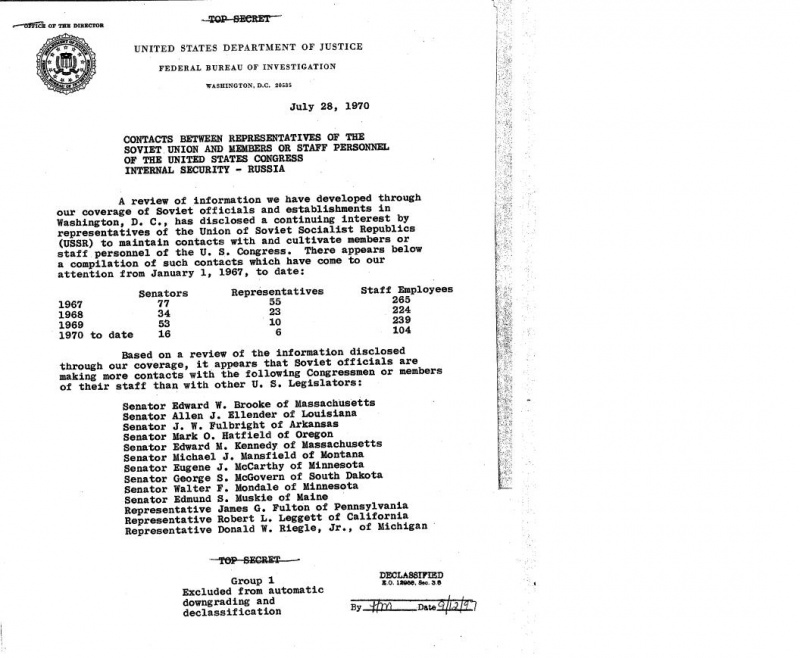 A review of information we have developed through our coverage of Soviet officials and establishments in Washington, D. C., has disclosed a continuing interest by representatives of the Union of Soviet Socialist Republics (USSR) to maintain contacts with and cultivate members or staff personnel of the U. S. Congress. There appears below a compilation of such contacts which have come to our attention from January 1, 1967, to date:

Based on a review of the information disclosed through our coverage, it appears that soviet officials are making more contacts with the following Congressmen or members of their staff than with other U. S. Legislators

The document was declassified on September 12, 1997

As at July 22, 1975, Eugene McCarthy served on the Advisory Board of the New York based Political Rights Defense Fund.[2] 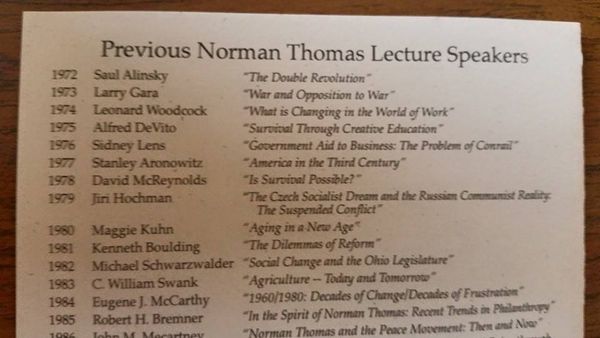 By its second decade the Institute for Policy Studies had built up considerable influence in the U.S. government.

According to Information Digest[3]the Institute for Policy Studies celebrated its 20th anniversary with an April 5, 1983, reception at the National Building Museum attended by approximately 1,000 IPS staffers and former staff.

Many of IPS's current and former Capitol Hill friends attended or were represented by members of their staff. Among those serving on the IPS 20th Anniversary Comittee chaired by Paul C. Warnke were Senators Chris Dodd {D-CT} and Gary Hart (D. CO) with an endorsement provided by Senator Mark Hatfield {R OR}.

Among those attending were Victor Navasky and Christopher Hitchens of The Nation, Abner Mikva, appointed by president Carter to the U.S. Court of Appeals, philanthropist Philip Stern and Rep. Robert Kastenmeier. Among the well-advertised "no shows" were Bianca Jagger, who has been lobbying Congress with the assistance of the Washington Office on Latin America and the CISPES-Committee in Solidarity with the Peoples of El Salvador, against U.S. aid to El Salvador and for aid to the Sandinistas; and Atlanta Mayor and former U.N. Ambassador Andrew Young.

The Council for a Livable World, founded in 1962 by long-time socialist activist and alleged Soviet agent, Leo Szilard, is a non-profit advocacy organization that seeks to "reduce the danger of nuclear weapons and increase national security", primarily through supporting progressive, congressional candidates who support their policies. The Council supported Eugene McCarthy in his successful Senate run as candidate for Minnesota.[4]