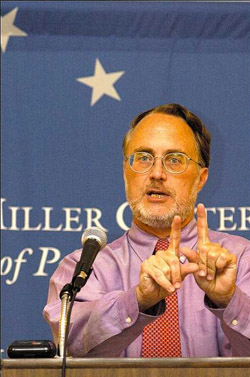 Template:TOCnestleft David Garrow is Research Professor of History and Law at the University of Pittsburgh School of Law, holding a joint appointment with Pitt Law and the Department of History. Prior to joining Pitt, Garrow was Senior Research Fellow at Homerton College, University of Cambridge.[1]

Garrow is the author of Liberty and Sexuality: The Right to Privacy and the Making of Roe v. Wade (Macmillan, 1994; updated paperback edition, University of California Press, 1998), a comprehensive history of the American reproductive rights struggle. His previous book, Bearing the Cross: Martin Luther King, Jr., and the Southern Christian Leadership Conference (Morrow, 1986; HarperCollins paperback, 2004), won the 1987 Pulitzer Prize in Biography and the seventh annual Robert F. Kennedy Book Award. Garrow is also the author of The FBI and Martin Luther King, Jr. (Norton, 1981) and Protest at Selma (Yale University Press, 1978), as well as editor of The Montgomery Bus Boycott and the Women Who Started It: The Memoir of JoAnn Gibson Robinson (University of Tennessee Press, 1987). He is co-editor of The Forgotten Memoir of John Knox: A Year in the Life of a Supreme Court Clerk in FDR’s Washington (University of Chicago Press, 2002) and of The Eyes on the Prize Civil Rights Reader (Viking Penguin, 1987, 1991). He served as a senior advisor for "Eyes on the Prize," the award-winning PBS television history of the American Black freedom struggle, and as editorial advisor for the Library of America's two-volume Reporting Civil Rights (2003). He regularly contributes to the Washington Post, the Wilson Quarterly, and New York Times, and in recent years his essays and articles also have appeared in Newsweek, The New Republic, the Financial Times, the Los Angeles Times, the Atlantic Monthly, the New York Review of Books, and The Nation. His academic writings have been published in the Supreme Court Review, the Yale Law Journal, the University of Chicago Law Review, Cornell Law Review, the Virginia Law Review, and Constitutional Commentary. [3]

In 1983 David Garrow was a Chapel Hill, North Carolina delegate to the Democratic Socialists of America conference in New York City, October 14-16, 1983[5]

In 1987, author David Garrow, was a member of Democratic Socialists of America. [6]

David Garrow signed an April 2003 Statement on Cuba, initiated and circulated[7] by prominent Democratic Socialists of America (DSA) member Leo Casey, calling for the lifting of trade sanctions against Cuba.