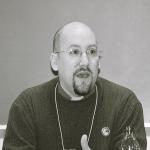 His articles have recently appeared in the Washington Post, Monthly Review Webzine, Dissident Voice, The Indypendent, Common Dreams and Links International Journal of Socialist Renewal. Billy Wharton lives in the Pelham Bay section of the Bronx.[2] 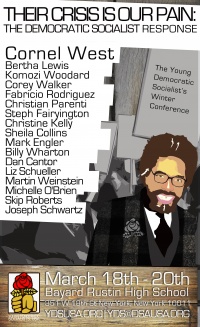 On the weekend of March 18th-20th, 2011, the Young Democratic Socialists held their annual Winter outreach conference "Their Crisis, Our Pain: The Democratic Socialist Response to the Great Recession". Cornel West "will be the featured speaker on Saturday the 19th, and we will also host John Nichols, Bertha Lewis, Mark Engler, and Dan Cantor from the Working Families Party.

Panels on race, the environment, organizing, and other topics will allow participants to learn from and communicate with fellow activists on some of the most important domestic and international issues. The event is perfect for both newcomers to Democratic Socialism/YDS, as well as activist veterans.

Add your name to the list here and you'll be notified when online registration goes live. Invite all your friends!

The march and action on the Brooklyn Bridge were a part of the ongoing occupation of Downtown Manhattan by the activist group Occupy Wall Street. Socialist Party USA members have actively supported this occupation since its inception and will continue to collaborate with all those interested in challenging the power of the richest 1% and Wall Street.

“The media has claimed that the protesters have no demands”, said Billy Wharton, co-chair Socialist Party USA. “Socialists have demands. We want a democratic society – we demand healthcare for all, the right to a good job and to live in a peaceful, non-militaristic world. That’s what we were marching over the Brooklyn Bridge for.”

The five arrested socialists join dozens of other Socialist Party USA members who have participated in direct actions since the economic crisis began in 2008. These actions have challenged anti-union legislation, have opposed budget cuts and have called for an end to war and occupation.[4]

Party Building and Organizing on the Left

This is a round table dialogue with various parties on the Left. It is a discussion that will look at the rewards and challenges of building a party of the Left, areas of common experience and difference with other Leftists, and how future action may be structured to assist our party building efforts.