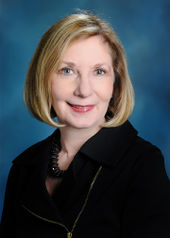 Template:TOCnestleft Robyn Gabel (born February 7, 1953) is a Democratic member of the Illinois House of Representatives, representing the 18th District since April 19, 2010. The district includes the suburbs of Evanston, Wilmette, Kenilworth, Northbrook, Northfield, Winnetka and Glencoe.

Robyn Gabel is a long-time resident of Evanston and has represented the people of the 18th District in the Illinois House of Representatives since 2010. Her daughter, Lilah, is a graduate of Evanston Township High School.

Before coming to the legislature Robyn was the Executive Director of the Illinois Maternal and Child Health Coalition from 1988 to 2010. She has a B.A. from Beloit College and M.S.P.H. from the University of Illinois Chicago, School of Public Health. She also has an M.J. in health law from Loyola University Chicago.

During her time in the legislature, she has been a legislative leader in protecting and fostering the growth of children and women in Illinois and environmental stewardship. Robyn serves as the Chair of the House Human Services Committee, the Vice-Chair of the House Human Services Appropriations Committee, and as a member of the committees on Insurance, Environment, Mass Transit, Business Growth and Incentives, and Museums, Arts and Cultural Enhancements.

A native of Rogers Park and Skokie, Ms. Gabel lives in Evanston with her husband Ivan Handler.

Robyn Gabel has a B.A. from Beloit College and a MSPH from the University of Illinois Chicago, School of Public Health. She also has an MJ in health law from Loyola University Chicago 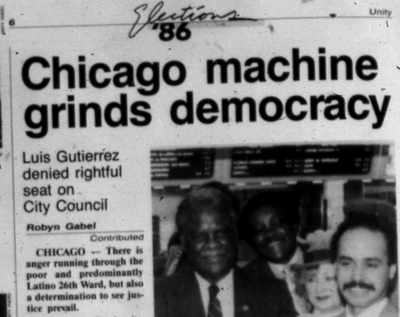 Robyn Gabel , was a contributor to Unity, April 11, 1986, the newspaper of the League of Revolutionary Struggle. She wrote an article on "machine" attempts to deny Luis Gutierrez an election victory.

"A call to build an organization for the 1990s and beyond"

This group was a split in the League of Revolutionary Struggle which soon became the Unity Organizing Committee. 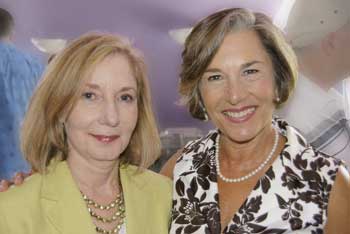 Congresswoman Jan Schakowsky (IL-9) announced on Oct. 10, 2009 that she is endorsing Robyn Gabel in the Democratic primary for the Illinois’ 18th House District. Gabel was running to succeed Rep. Julie Hamos (D-Evanston), who left her seat to run for U.S. Congress in the 10th Congressional District.

“Robyn stands up for what she believes in,” said Rep. Schakowsky. “That is what her history has been about, that is what she has been dedicated to. We know how effective she is in actually getting things done, its not just talk. I know she will be able to hit that ground running, which is what we need in our district.”

Rep. Schakowsky, who was traveling to Afghanistan as part of a Congressional mission, made the remarks via video to a crowded room at Ms. Gabel’s new campaign office – 906 Sherman Ave. The event marked the official kick-off of Ms. Gabel’s campaign for State Representative.

“I am honored and humbled by Congresswoman Schakowksy’s endorsement and support,” said Ms. Gabel. “Our community has had a strong history of progressive leadership in Springfield with Jan Schakowsky and Julie Hamos. I hope to follow in their footsteps by continuing to fight for our children, families and community.”

“When I became Deputy Majority Leader of the House this year, I determined it was more important than ever that I help good candidates win public office,” said Rep. Lang. “I can not think of another candidate in the state of Illinois that is trying to fill a seat that would be better, that would be hitting the ground running and ready to start day one, and who would do it better than Robyn Gabel. I am proud to be here, proud to support Robin.”[1]

Robyn Gabel has been involved in Marguerite Horberg's portoluz organization. She served on the 2010 gala host committee;

On Friday February I am cosponsoring and event with FAN. U.S. Senator Corey Booker (D-NJ) will be discussing his new book United: Thoughts on Finding Common Ground and Advancing the Common Good, in which he calls for a reorientation of our nation and our politics around the principles of compassion and solidarity.

February 2019, a group of House Democrats formed an official Illinois Progressive Caucus they say will champion a liberal agenda “to provide a better direction” for Illinois. 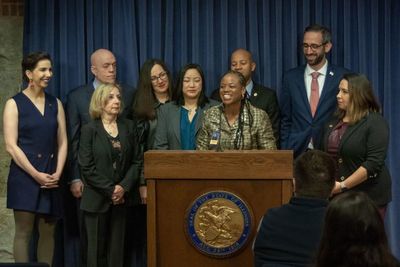 Among their legislative priorities are increasing the state’s minimum wage to $15 per hour, legalizing recreational marijuana, and campaign finance reform. The minimum wage increase has been approved by the Senate and House and awaits Gov. J.B. Pritzker’s signature.

The Progressive Caucus’s 16 members, most of whom are from Chicago and the suburbs, also plan to consider other initiatives, such as a progressive income tax and expansion of Medicare.

“We are a group of legislators who believe in a progressive vision for our state, one where our government guarantees stability and decency for all Illinoisans,” said Rep. Carol Ammons, caucus co-chair from Urbana.

That evolved into the caucus’s Statement of Principles, based on an idea “there is an unjust concentration of power at the very top” of government, said co-chair Will Guzzardi, a representative from Chicago.

The governor also indicated his support for legalizing recreational marijuana. Rep. Kelly Cassidy of Chicago, with Sen. Heather Steans, is leading the group’s efforts to accomplish that.

Chicago Rep. Theresa Mah outlined the group’s ideas, which have not yet been submitted as legislative proposals this session. A candidate could choose to forego accepting large donations, in favor of small-donor ones that are matched “several times over” by a public fund through state government.