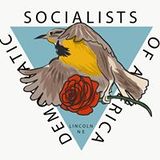 Billy DeFrain, was in January 2017, contact for Lincoln Democratic Socialists of America Organizing Committee.[1] He is a web designer.

In July 2017 the contact for Lincoln Democratic Socialists of America was Erika Paschold.[2]

The hot August air was stifling as the sun beat down on Lincoln, Nebraska. The oppressive atmosphere was befitting. Like the rest of the country, Nebraska’s marginalized and working class communities are under assault by reactionary forces—attacks on healthcare, education, and women; ICE raids terrorizing communities and tearing apart families; and just last month, for the first time in 20 years and steered by the barbaric whims of its millionaire governor, the state executed a man.

Despite these grim circumstances and the sweltering atmosphere, over 100 people gathered on a Saturday in the cool confines of Lincoln’s Unitarian Church: leftist thinkers, activists, organizers, and newcomers from all over the region. Together, they began creating a new vision of what it means to be a “red state.”

The first annual “Red State” Leftist Conference was the state’s largest explicit gathering of leftists in many decades. Nebraska DSA, Nebraska Left Coalition, Lincoln ISO, and the Black Cat House sponsored the one-day event. The purpose was to nurture unity and share ideas and strategies, all toward building a working-class movement that seeks to dismantle capitalism and other oppressive structures and shift power to the people.

The day kicked off with the panel: “What is the Red State?” Organizers Zac Echola, Jewel Rodgers, Reed Underwood, and Rose Welch discussed the challenges and opportunities of organizing in the Midwest. Discussions ranged from tackling the town and country divide to organizing conversations and models for campaigns.

Between panels, attendees came together in breakout workshops. Topics included post-Marxist thought, intersectionality, accountability and self-assessment, starting a radical space, one-on-one conversations, printmaking, and more. The scope and depth of the workshops reflected the breadth and diversity of the working class. It also reminded us how often capitalism limits our ability to express ourselves, even when we are with our comrades. Rarely are there settings where educators practice having a one-on-one with a steelworker. In one instance, in a workshop on Theatre of the Oppressed—a form of theatre designed to promote social and political change—attendees paired up and engaged in an exercise called “Columbian Hypnosis.” In this exercise, pairs took turns following the hand of their partner as closely as possible with their head. While a fun exercise, it also became a simple demonstration of how class conditions and power relations function.

The second panel of the day was “Where Does the Red State Go from Here?” Three prominent organizers in the region—Hannah Allison, Amanda Huckins, and Brett O’Shea—discussed the future of building leftist power in the Midwest. The discussion included building a strong anti-fascist infrastructure, building dual power, left plurality, and sharing spaces.

“We have access to power,” Huckins told the crowd when explaining her housing work. “But we’re not using that power.” On a similar note, O’Shea explained the importance of leftists reaching out to the working class beyond their political bubble, namely the “depoliticized and the apolitical.” Occasionally the panelists disagreed, particularly along the question of electoral politics. But overall, it ended with an atmosphere of respect and unity, keeping in line with the purpose of the conference.

If you have any interest in organizing a regional conference in the model of Red State, contact DSA Lincoln at dsalincoln at gmail.com. We’ll be here, ready to organize with you.[3]

Come discuss the results of the 2017 DSA National Convention, and learn how you can get involved in building Democratic Socialism right here in Nebraska.[4] 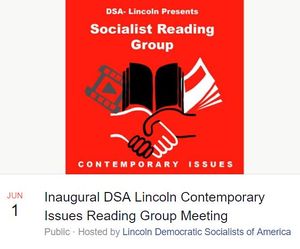 The DSA Education Committee will be holding its first Contemporary Issues reading group Thursday June 1st, from 7 - 9 p.m. at The Black Cat House on 16th and B street.

This group is oriented towards discussing various articles, films, and other forms of media that pertain to current events and how they are reflected in our views as Socialists.

For the first meeting, the group will be reading an article titled "The Anarchists vs. The Islamic State" from Rolling Stone Magazine. And in conjunction with this article, we will be watching a video from Vice Media called "Rojava: Syria's Unknown War".

We will also be reading together and discussing chapter two of Mark Fisher's book "Capitalist Realism". [5] 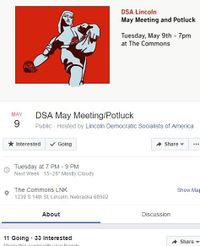 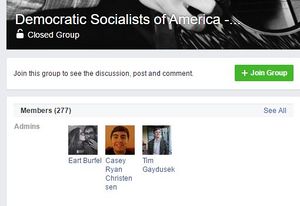