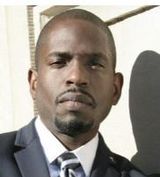 Claims Black Americans are being 'Blocked' from Voting

Khalid Kamau claimed on Twitter Oct 22 2018 that Black Americans are being "blocked" from voting.[1] 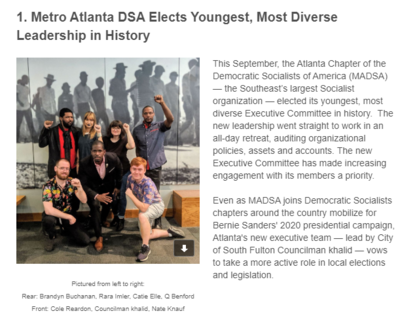 This September, the Atlanta Chapter of the Democratic Socialists of America (MADSA) — the Southeast’s largest Socialist organization — elected its youngest, most diverse Executive Committee in history. The new leadership went straight to work in an all-day retreat, auditing organizational policies, assets and accounts. The new Executive Committee has made increasing engagement with its members a priority. 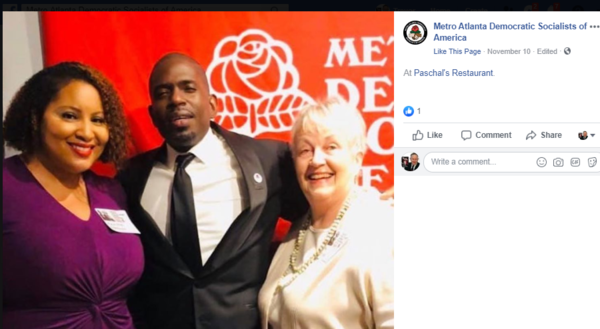 Georgia State University professor Alex Sayf Cummings, who describes himself as a "Libyan, trans, socialist" on Twitter posted a short video of the event.

“I am a socialist.” Black Lives Matter activist and the first self-identified socialist to get elected in Georgia, khalid kamau, speaking for Gov candidate @StaceyAbrams at Manuel’s Tavern. 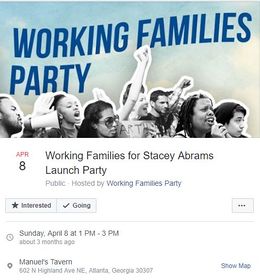 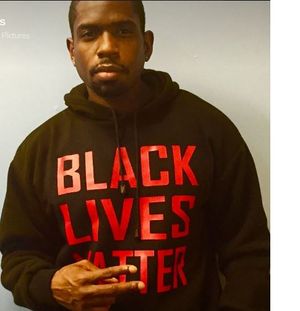 In November of 2015, when it was announced that Atlanta was forming a Black Lives Matter chapter, I knew I had to be there. Like many folks, I was shocked by BLM’s intentional intersectionality: the idea that all oppression (race, class, gender, sexual orientation) is connected; therefore, our liberation is connected. This was a surprise, yet perfectly encapsulates the phrase, “Black Lives Matter.”

Kamau works with multiple organizations, including #BlackLivesMatter, #ATLisReady, #Fightfor15, the Bernie Sanders campaign and the Democratic Party of Georgia.[4]

The visit is part of a “day of action” dubbed #OverjoyedForFloyd, in which dozens of volunteers, led by Abrams and Griffin, will make telephone and in-person calls to voters in the 145th district.

Both Griffin and Abrams hope these events will educate voters on this year’s issues, and persuade them that Griffin is better prepared to represent Middle Georgians.

“Politics isn’t a sport,” said Griffin’s field organizer, Khalid Kamau. “You can’t just root for the guy who plays for ‘your team’ no matter how inexperienced he is. Our livelihoods and hospitals are at stake. Experience matters.”[5]

FROM PROTESTS TO POLITICS

Humbled to be following in the footsteps of a Civil Rights Legend (& my Congressman) John Lewis. #Defendthe5th — with Ruby Sales, Kristan Woolford and Charles A. Black. 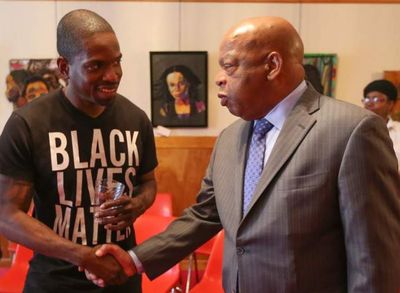 In February 2017, Metro Atlanta Democratic Socialists of America member Khalid Kamau was running for a council seat in the new City of South Fulton on a very progressive platform and "needs volunteer canvassers ASAP, as early voting for the March 21 election begins Feb. 27. South Fulton is the second largest city in Georgia, with the sixth largest population."[6]

“Revolution at the Crossroads"

From February 17-19 2017, members of Young Democratic Socialists (YDS) gathered for “Revolution at the Crossroads: Igniting the Socialist Resistance Against Trump.” The first YDS conference since the post-Bernie/Trump boom, the gathering "acted as a rally point for all our new members as well as the staging ground for building and confronting the new far-right administration".

More than 250 people attended, almost three times as many as last year. Many of the attendees had just joined DSA in the past couple of months, and many were first politicized by the Bernie campaign. But "as less than a month had passed since the Inauguration, all attendees were concentrated on President Trump's new far-right administration".

Longtime DSA veteran Michael Lighty spoke first. The first openly LGBT person to lead a U.S. socialist organization, when he was national director of DSA in the early 90s, Lighty is now the director of public policy for National Nurses United. The Nurses were a key ally of the Bernie campaign, headlining The People's Summit which DSA co-sponsored last year. He spoke passionately of the need to make socialism more readily accessible to the masses already energized by the Bernie campaign. Joining him were veteran anarcho-syndicalist and co-founder of People for Bernie Winnie Wong, who spoke equally passionately on the need to work both within the Democratic Party to ease the path for more left-leaning candidates, and outside the party. Rounding out the panel was Khalid Kamau, member of Black Lives Matter and candidate for city council in the City of South Fulton, Georgia. He highlighted the right wing's long-term strategy, especially their use of local races as a path for base building and candidate training. He argued that the left also needs to employ this strategy.[7] 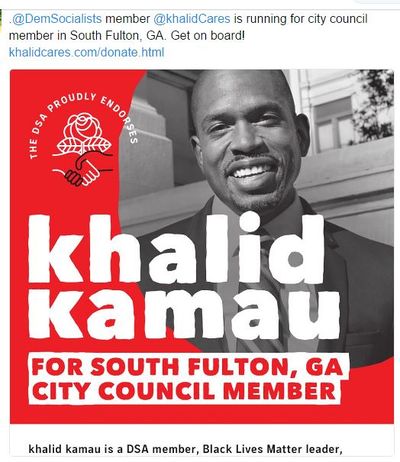 Khalid Kamau, ran for City Council, in South Fulton in 2017;

The new City of South Fulton presents an opportunity to create the largest Progressive city in the South. An Atlanta #BlackLivesMatter & #FightFor15 Organizer turned Democratic National Convention Delegate for Bernie Sanders, KHALID is leading a generation of young activists moving from protest to politics.

​​Born in the City of South Fulton, Khalid's father, an accountant for Atlanta Workforce Development, and mother, manager of Grady's Bankhead clinic, instilled in him Christ's teaching that "whatever you do for the least of these, you do for me." (Matthew 25:40)

It was at McNair, at the age of 13, that he staged his first demonstration – where his petition to include African nations in the predominately black middle school's Olympics-themed "Field Day" became a full-fledged student protest covered by local news. ​ His organizing continued through high school (Banneker, Tri-Cities) and Ithaca College in New York, where he became well-known as a passionate defender of the working poor, women, LGBT people and the environment.

As a wire technician, Kamau installed & repaired VoIP and cable in private homes and small businesses.

When the economy took a downturn, khalid took a series of blue-collar jobs, working on telephone polls as a wire tech for AT&T, and a bus driver for MARTA. These jobs gave him first-hand experience with organized labor and unions fighting to hold on to living wages and employee benefits that are vanishing due to corporate greed. khalid's personal experience with America's — and South Fulton's — shrinking middle class, increased his compassion for working class families.

In fact, it was his experience fighting the outsourcing of MARTA's Mobility Service workers that lead khalid into politics full time; first as labor activist with the Amalgamated Transit Union (ATU), then as a volunteer with the Bernie Sanders campaign and the Democratic Party.

An activist with prophetic vision to pursue progressive policies ' in the streets & the suites,' khalid enrolled and graduated from Fulton County Citizens University, while being an active member of Atlanta Neighborhood Planning Units (NPUs) V (Mechanichsville), where he organized a neighborhood watch program; and NPUs P (Camp Creek) & L (Vine City), where he participated in Economic Development negotiations around the new Mercedes-Benz arena. ​

Khalid helped organize the Atlanta chapter of #BlackLivesMatter and served as a Field Organizer for the Georgia House Democratic Caucus. In 2016, he was elected as an At-Large Delegate to the Democratic National Convention.

A college-educated, community activist with a career in nonprofit management and experience in blue-collar jobs. This unique blend of professionalism, compassion & working class struggle is what we need to make the City of South Fulton a world-class city for working class families.[8]

DSA on a roll

Parker is now the thirteenth DSA member holding elected office in the country. With his victory, Parker joins a list that includes Carlos Rosa, Chicago’s 35th Ward Alderman, Mike Sylvester, of the Maine House of Representatives, and Julie Ann Nitsch, Austin Community College Board of Trustee in Texas.

“DSA is very excited about our own member Dylan Parker being elected Alderman of Rock Island, Illinois” DSA National Director Maria Svart Said. “You can now find DSA chapters in nearly every state in the union, and our public electoral activity and success can only grow from here.” In addition, DSA hopes that Khalid Kamau, a member running for city council in South Fulton, GA, will win the next DSA electoral victory on Tuesday, April 18th.[9] 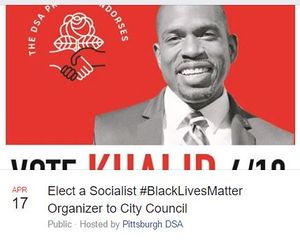 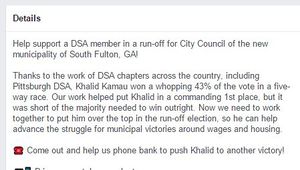 Thanks to the work of DSA chapters across the country, including Pittsburgh DSA, Khalid Kamau won a whopping 43% of the vote in a five-way race. Our work helped put Khalid in a commanding 1st place, but it was short of the majority needed to win outright. Now we need to work together to put him over the top in the run-off election, so he can help advance the struggle for municipal victories around wages and housing. 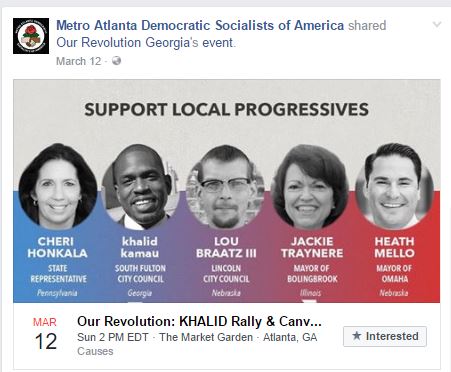 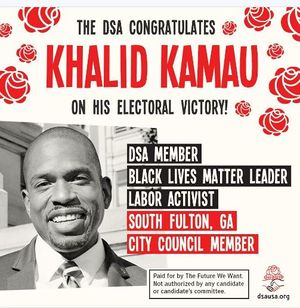 Khalid Kamau, a Democratic Socialists of America (DSA) member and endorsed candidate for City Council in South Fulton, Georgia , won in April 18th's election with 67 percent of the vote. Kamau defeated Charlean Parks, who finished second in the five-way primary race on March 21st. In addition to DSA, he was endorsed by Our Revolution, Teamsters Local 728, and Street Groomers.

“Far too many elected officials start their day thinking of your boss instead of you — but the working people of South Fulton will have a City Council member on their side: Khalid Kamau,” explained Maria Svart, Democratic Socialists of America's national director. “Khalid’s win today is a tremendous victory for his community and a shot across the bow for politics as usual nationwide.”

Erin Parks, an Our Revolution - Georgia activist, Metro Atlanta DSA chapter member and Kamau campaign volunteer expressed enthusiasm: “Khalid's campaign and victory prove that teamwork and a people-centered platform can prevail against all odds. His win is a harbinger of things to come in the Metro Atlanta progressive movement.”

Khalid entered today’s runoff election after coming in first place in a five-way primary election held in March with 43%. In that race, khalid won twice as many votes as the next runner up, and the highest percentage of any candidate running for any office in South Fulton. DSA members across the country made thousands of phone calls on behalf of khalid for both rounds of the election.[10]

The Metro Atlanta Democratic Socialists of America Afro-Socialists' first event, the Black Power Bowl, drew this great crowd to a get-together at the Phillip Rush Center, Feb. 4. 2018. Attendees included South Fulton Councilman Khalid Kamau; MADSA officer Erin Parks; BLM and Rise Up activist Dawn O'Neal; attorney and Atlanta NAACP Vice-President Gerald Griggs; attorney and political commentator Anoa Changa; and representatives of several other organizations, educators, and small business owners. The group came together for a moment of fellowship and trivia fun. Councilman khalid explained on FB: "#SuperBowl quarterback with a multimillion-dollar #NFL contract, took a knee — not just for a game, but an entire season — and brought a national conversation about police brutality and the #BlackLivesMatter movement into the homes of Americans desperate to avoid it. And when the NFL, in retaliation, stripped him of his career, it sparked an #NFLBoycott that cost the league 2 MILLION viewers. Around the country, #NFLBlackOut parties & protests are creating networks of new activists."[11]

The Black and the Bern: The Rise of Insurgent Black Progressive Politics; 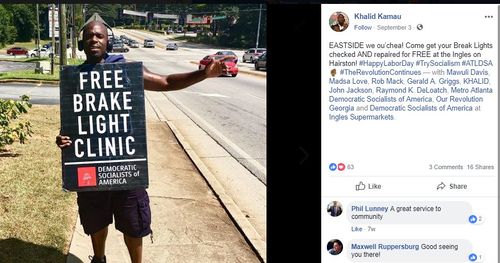