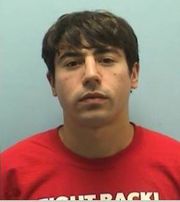 Jacob Aronowitz is an Austin Texas activist. He is a member of Austin Democratic Socialists of America.[1] 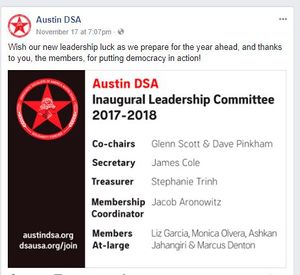 Members of the Left Up To US closed Facebook group, as of August 11, 2017 included Jacob Aronowitz,[4]

We send our thanks to Bastrop County Indivisible for nominating Mike Siegel for a national endorsement from the Indivisible Project! So far in this campaign, we have been lucky enough to work with folks from Bastrop as well as Indivisible Austin, TX-10 Indivisible, Indivisible Cedar Park, Indivisible Fayette County, Indivisible Cypress, Texas, Indivisible Katy Huddle, and Indivisible Rosedale Huddle! This movement is amazing, and we are honored to be a part of it.

The campaign for congressional candidate Mike Siegel said one of their staffers was arrested October 2018 after he delivered a letter to the Waller County Elections Administrator’s Office. 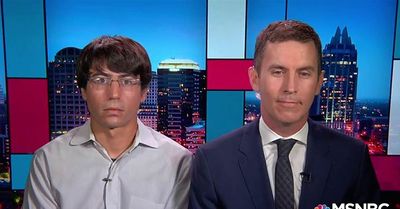 The campaign for Siegel, a Democrat running for Texas’ 10th Congressional district, said Jacob Aronowitz was arrested Wednesday and charged with failure to identify.

The campaign added law enforcement detained Aronowitz after he took a photo to prove the letter had been received.

Siegel said this change in policy will discourage students from voting.

News 88.7 reached out to the Waller County Sheriff’s office for comment. Captain Manuel Zamora said Aronowitz was not arrested, but given a Class-C citation and is scheduled to appear in court in 30 days.

Zamora said officers responded to a “breach of peace” at the Elections Administrators Office after an administrator complained about Aronowitz taking excessive photographs of her and then refusing to delete them.[6]