"Since its establishment in 1994, CAIR has worked to promote a positive image of Islam and Muslims in America. Through media relations, government relations, education and advocacy, CAIR puts forth an Islamic perspective to ensure the Muslim voice is represented. In offering this perspective, CAIR seeks to empower the American Muslim community and encourage their participation in political and social activism."[1] 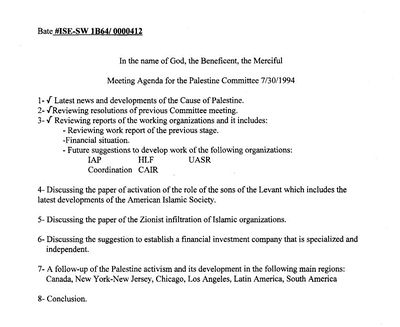 Evidence linking CAIR and its founders to a Hamas-support network has been released through court action. That evidence prompted the FBI to cut off its outreach with the group. In 2010, the DOJ said it had seen no "new evidence that exonerates CAIR from the allegations that it provides financial support to designated terrorist organizations."

CAIR was listed among organizations belonging to an umbrella group of Hamas-support entities in the United States called the Palestine Committee. In addition, CAIR founders Nihad Awad and Omar Ahmed were included alongside senior Hamas officials such as Mousa Abu Marzook and Ahmed Yousef on a telephone list of individual Palestine Committee members.

That evidence was released in the terror-financing trial of the Holy Land Foundation for Relief and Development (HLF) in Dallas.[2]

Letters of support written in September 2018 for the Council on American-Islamic Relations (CAIR) from Congressional Lawmakers obtained by The Investigative Project on Terrorism:[3]

CAIR's civil rights department counsels, mediates and advocates on behalf of Muslims and others who have experienced religious discrimination, defamation or hate crimes. The department works to protect and defend the constitutional rights of American Muslims, thereby supporting the rights of all Americans.[4]

CAIR's government affairs department conducts and organizes lobbying efforts on issues related to Islam and Muslims. The department monitors legislation and government activities and responds on behalf of the American Muslim community. CAIR representatives have testified before Congress and have sponsored a number of activities designed to bring Muslim concerns to Capitol Hill.[5]

CAIR's communications department works with local and national media to ensure an accurate portrayal of Islam and Muslims is presented to the American public. CAIR monitors local, national and international media, in part to challenge negative stereotypes, but also to applaud and encourage positive representations of Islam and Muslims. Over the years, CAIR has become a respected and credible source for journalists and other media professionals.[6]

In 2019 Council on American Islamic Relations (CAIR) held its 25th Annual Gala in Washington, D.C, in which CAIR’s executive director announced a goal of pushing more Muslims into Congress.

A strong CAIR equals a strong community. A strong community will produce a strong and confident and successful Muslim … “So I’m telling you tonight we are going to work in the next years, inshallah (God willing], to elect at least 30 Muslims in the Congress. This number is equivalent to our size and our potential as American Muslims. Including at least two [U.S.] senator Muslims.

In addition, Awad envisioned Muslim judges, including a justice on the U.S. Supreme Court, along with an Islamist extension of Hollywood. [7] 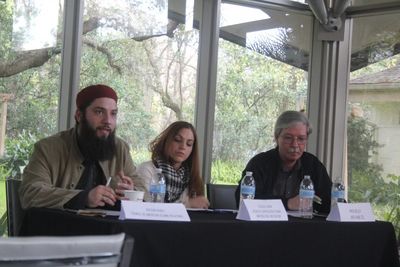 A group of 50 people gathered at the First United Church of Tampa, February 2015, for a panel discussion, “State Repression and the War on Terror.” Speakers focused on the U.S. government targeting of Arab-Americans, Muslims and anti-war activists for political repression.

“Only the fish that opens its mouth gets in trouble,” said Attorney Hassan Shibly of the Council on American Islamic Relations (CAIR). Shibly advised individuals to remain silent and call their lawyer when facing intimidation and questioning by the FBI. CAIR offers representation to clients for free.

Another panelist, Cassia Laham, spoke about the growing student movement in opposition to U.S. support for Israeli and for the liberation of all of Palestine. She helped found Students for Justice in Palestine at University of Florida.

“We have a duty to keep organizing together to keep moving forward,” Laham said. Currently she is active with People’s Opposition to Imperialism, War, and Racism (POWIR) in Miami and organizes in solidarity with Palestinian American women’s leader Rasmea Odeh..

“Targeting of Arab Americans and Muslims for the sake of ‘safety’ is a lie used by the state to perpetuate fear of these oppressed communities and to instill support of U.S. wars overseas,” said Mick Kelly from Minneapolis.

“The U.S. has built an empire that encompasses every continent, the people of the Middle East are defeating that empire. They are fighting to get the boot of the U.S. and Israel of their necks. We need to stand in solidarity with all those who are fighting for their liberation and defeat attempts to repress ourselves and others,” continued Kelly. Kelly is one of the anti-war and international solidarity activists whose home was turned upside down by the FBI in 2010.

Kelly also spoke about Rasmea Odeh’s trial in Detroit, “Through organizing and speaking out, it is a way to make a breakthrough.”

The CSFR-Tampa is organizing a local protest on March 12 in support of Rasmea Odeh. One local leader will be attending Odeh’s sentencing in Detroit.[8] 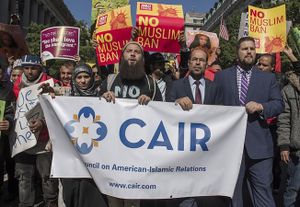 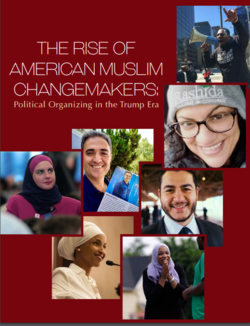 The Rise of American Muslim Changemakers

A report by Jetpac, Council on American-Islamic Relations, and MPower Change called The Rise of American Muslim Changemakers reports:

"The success of the “My Muslim Vote” campaign was built atop the organizational infrastructure MPower Change has built since its founding.

MPower has quickly grown to become one of the largest Muslim-led social and racial justice organizations in the United States. It combines digital organizing with grassroots, community-based organizing to conduct campaigns with a diverse set of ally organizations across the U.S. Founded in 2014 by Linda Sarsour, Mark Crain, and Dustin Craun, who collectively brought together more than 40 years of community organizing experience, the intention was to build a grassroots organization rooted in the diverse Muslim communities in the United States. Combining their experiences in faith-based, local, and digital organizing, together they convened a group of leading American Muslim organizers and faith leaders to set the spiritual, political, and organizational vision. Today, MPower Change has developed both a digital organizing team and a field team that leads on the ground organizing in key cities across the U.S.

"Like other online activist platforms such as Color of Change, MPower Change directly engages with Muslims and ally communities who are interested in community organizing. The diversity of the organizational leadership, the intersectionality of the campaigns and actions supported by the platform, and the strong focus on Muslim values makes MPower Change a unique voice in the Muslim community willing to take on important social justice issues."