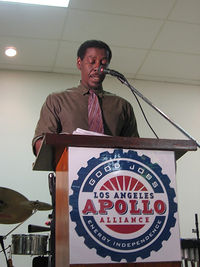 Anthony Thigpenn is an Executive Director of AGENDA and an Apollo Alliance National Advisory Board member.[1]

Anthony Thigpenn is the founder and President of California Calls and a Leadership Team member of the State Power Caucus.[2]

Anthony Thigpenn was a member of the Black Panther Party. 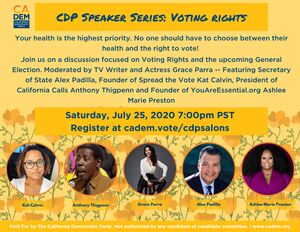 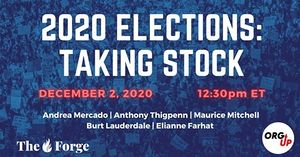 Some of the best electoral organizers are coming together to take stock of the 2020 US elections and chart the path forward. Join hosts Harmony Goldberg and Ana Maria Archila as they talk to our all-star guests about the tactics that defeated Trump, as well as the strategy for building a progressive majority and governing power around the country.

In September 2019 Anthony Thigpenn was one of 100 black leaders, many affiliated with Liberation Road who signed A letter from the movement to the movement defending Maurice Mitchell and Nelini Stamp of the Working Families Party for endorsing Elizabeth Warren instead of Bernie Sanders for the Democratic Party presidential nomination.

In 1970 Michael Zinzun joined the Black Panther Party. In the mid 1970s he joined Los Angeles-area anti-police brutality activists B. Kwaku Duren and Anthony Thigpenn to form the Coalition Against Police Abuse . The organization investigates allegations of abuse, provides support for victims and families, and agitates for justice in street demonstrations and courtrooms. CAPA acknowledges a direct descent from the Black Panther Party, with many former BPP members, but is a distinct organization many of whose members critique what they see as the intensely hierarchical and patriarchal tendencies of the now defunct BPP.

Almost from the moment of CAPA's inception the LAPD infiltrated and placed it under surveillance. The techniques used by the LAPD in spying on and undermining the organization closely resembled those used by the FBI COINTELPRO program. CAPA joined with other similarly victimized organizations to sue the department and won a monetary settlement and assurances that similar practices would not be reimplemented. Nonetheless it is the belief of many CAPA members that they are still targeted by the LAPD and other government agencies for domestic espionage, infiltration, and sabotage. As a result of the lawsuit the LAPD disbanded the Public Disorder Intelligence division responsible for the original infiltration.

After the 1979 police shooting death of Eula Love in South Central Los Angeles CAPA proposed a civilian police review board, modeled on similar boards in other cities, that would have had the power to fire and otherwise discipline abusive police officers and change police policies. A petition in favor of the review board did not garner enough signatures to place it on the ballot. Nonetheless, the effort was successful in helping the organization become better known in South Central.[3]

In the 1980s Karen Bass' work with the Venceremos Brigade and Jobs with Peace brought her in contact with activists Gil Cedillo, Anthony Thigpenn, Mark Ridley-Thomas and Antonio Villaraigosa , who were working in the progressive "Black/Brown" movement and were part of Jobs with Peace.[4]

The two key founders of the New Party were Joel Rogers and Dan Cantor.

The very first meeting included Gerry Hudson from Democratic Socialists of America and SEIU and Gary Delgado, plus labor activists Sam Pizzigati and Tony Mazzocchi. Anthony Thigpenn of Los Angeles was also approached, but though supportive did not wish to play a leadership role.[5] 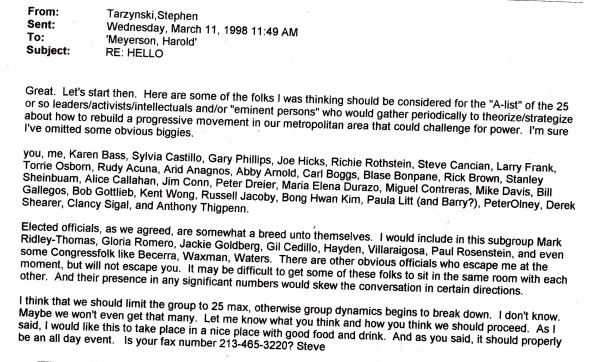 In March 1998 “Endorsers of the Call” to found a Black Radical Congress included Anthony Thigpenn, Chairman of the Board, Action for Grassroots Empowerment & Neighborhood Alternatives, Los Angeles[6].

Circa 2002 , Anthony Thigpenn, AGENDA/Metropolitan Alliance, served on the Advisory board of the Democratic Socialists of America dominated Progressive Los Angeles Network.[8]

In 2005, Thigpenn ran the field campaign for Antonio Villaraigosa.[9]

According to Harold Meyerson of LA Weekly, it was "L.A.’s liberal operatives who helped put Villaraigosa over the top". His field campaign was captained by Anthony Thigpenn, one of a "cadre of progressive younger African-Americans who are transforming the politics of South-Central". [10]

In 2006, SCOPE convened the Los Angeles Apollo Alliance, which aims to connect low-income communities to the “emerging green economy.”[11]

In 2006, Thigpenn, served on the National Advisory Board of the Apollo Alliance.[12]

As at April 12, 2010, the following served on the Pushback Network Steering Committee:[13] 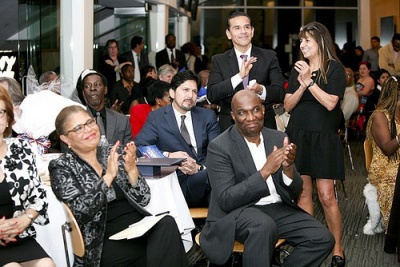 We have an amazing team of advisors and thought partners that help us shape our strategies.

New World Foundation leads by example. Our Board is made up of social justice practitioners, past and present grantees, movement thinkers, and leaders.[19]